Kenya’s Gulag: The Dehumanisation and Exploitation of Inmates in State Prisons 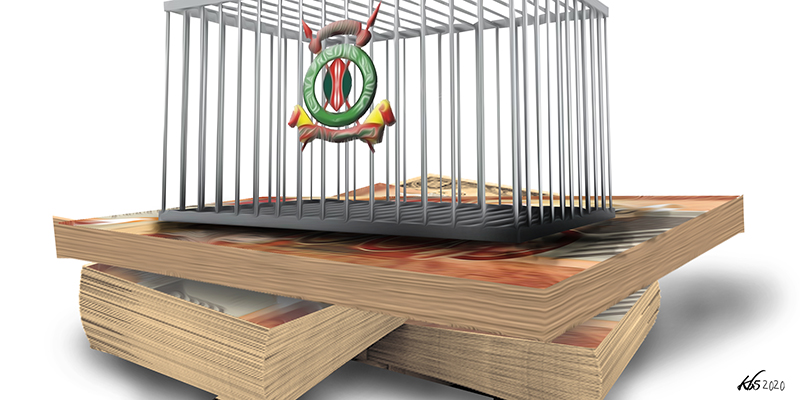 The influx of the Mau Mau transformed the prison population in Kenya from one predominantly made up of recidivist petty criminals and tax defaulters to one composed largely of political prisoners, many of whom had no experience of prison life and who brought with them new forms of organisation.

Prison life was harsh, with its share of brutalities and fatalities. Between 1928 and 1930, about 200 prisoners in Kenya died. According to British historian David Anderson, “Kenya’s prisons were already notably violent before 1952 [when the Mau Mau uprising began], more violent than other British colonies.”

However, the incorporation of prisons and detention camps into the “Pipeline” (the system developed by the colonial state to deal with the Mau Mau insurgents and to try and break them using terror and torture) inevitably led to the institutionalisation of the methods of humiliation and torture.

As Anderson notes, “Most of the staff in both the Prison Service and in the [Mau Mau] detention camps were Africans. Some were even Kikuyu. They certainly ‘learned’ these methods during their periods of early employment.” He goes on to say that “those who ran the service by the 1960s and early 1970s were all men who had been recruited and trained during the Mau Mau period”. He thinks it “very likely that these individuals practiced what they had learned as cadets and trainees in the 1950s…I think the Mau Mau experience certainly hardened Kenya’s prison system and introduced a greater range of punishments and harsher treatment for prisoners as a consequence of the conditions off the Emergency”.

Compare, for example, this account of the treatment of Mau Mau detainees in the 1950s published in Caroline Elkins’ book, Britain’s Gulag: The Brutal End of Empire in Kenya:

Regardless of where they were in the Pipeline (the system of camps established for deradicalizing Mau Mau detainees and prisoners), roll call meant squatting in groups of five with their hands clasped over their heads. The European commandants would then walk through the lines, counting and beating the detainees. “The whole thing was just so ridiculous,” recalled one former detainee from Lodwar. “Whitehouse [the European in charge] would just count us over and over again.”

It bears stark similarities to this account published in the Daily Nation about conditions in Kenyan prisons 65 years later:

Omar Ismael, 64, a former Manyani inmate who served nine years till his exoneration in 2017, says he woke up at 5am, despite his advanced aged. They then squat in groups of five to be counted and checked by guards. “My knees are still hurting to date. I have a joint problem too as a result,” he says. He says they had at least six head counts per day. The first one at 5am, followed by 10am, noon, 4pm, 6pm and 7pm.

Kenyan prisons today carry the DNA of their forebears – the colonial prisons and Mau Mau detention camps. They are about brutalising prisoners into submission and, along with the police and military, scaring the rest of society into compliance with the state. They are places of dehumanisation, abandonment and retribution. And like their colonial parents, they prefer to employ the least educated. (At present, out of a staff complement of 22,000, the Kenya Prison Service only has about 700 graduate officers.) As of 2015, according to the World Prison Population List prepared by the Institute for Criminal Policy Research, Kenya has incarcerated more of its citizens per 100,000 population than any other country in Eastern Africa with the exception of Rwanda and Ethiopia.

Notably, about 50 per cent of Kenya’s 54,000 prisoners are pre-trial detainees or those held in remand as they await trial – people legally considered innocent. By comparison, the median proportion of pre-trial prisoners in Africa is 40 per cent and nearly 30 per cent globally. In Eastern Africa, only Uganda and Ethiopia have a higher proportion of pre-trial detainees than Kenya. As in colonial times, pre-trial detention is driven by two factors – the need to extract resources from the populace and the subjugation of the native through criminalisation of ordinary life.

In 1933, submissions to the Bushe Commission provided some flavour of how the threat of arrest and imprisonment was ever-present among the natives.

Once I was arrested by a District Officer on account of my hat because I did not see him approaching. He came from behind and threw it down. I asked him why because I did not know him. He called an askari and asked for my name. It was in a district outside. He asked me, “Don’t you know the law here that you should take off your hat when you see a white man?” Then he asked me, “Have you got your kipandi?’ I said “No, Sir.” So I was sent to prison… When an askari thinks that you look smart he asks if you have your kipandi. I have seen natives who are going to church in the morning who have changed their coat and forgotten their kipandi. They meet an askari. “Have you got your kipandi?” “No.” “Ah right” and they are marched off to prison.

This will sound familiar to many Kenyans today whose encounters with the police often begin with demands for the production of the kipande (ID card) and end with a stint in overcrowded police cells. However, there are some differences. An audit of pre-trial detention by the National Council on the Administration of Justice found that police generally arrested and charged people for petty offences, with close to half of those arrests occurring over weekends. Most releases from police custody also happened over the weekend with no reason recorded for two-thirds of those releases. Further, only 30 percent of all arrests actually elicited a charge, the vast majority for petty offences. This implies that most police detentions today are something of a catch-and-release programme designed to create opportunities to extract bribes rather than labour.

However, for those who get incarcerated, matters are somewhat different. The exploitation of prisoners’ labour continues. Like the Mau Mau detainees, they are required to work for a token amount determined by the government, which, unlike its colonial ancestor, does not even pretend that the 30 Kenyan cents per day is meant as a wage, with the Attorney-General declaring in court that “prison labour is an integral component of the sentence”. The courts have held that it is entirely compatible with the protection of fundamental rights for the Prison Service to do this as well as to deny convicts basic supplies such as soap, toothpaste, toothbrushes, and toilet paper. Apparently, the conditions the convicts are experiencing cannot be called forced labour and servitude because, the strange reasoning goes, “the Constitution and the Prisons Act do not permit forced labour or servitude”.

Notably, about 50 per cent of Kenya’s 54,000 prisoners are pre-trial detainees or those held in remand as they await trial – people legally considered innocent…In Eastern Africa, only Uganda and Ethiopia have a higher proportion of pre-trial detainees.

Like in colonial times, the beneficiaries of this prison industrial complex are the state and those who control it. Remandees and convicts are liable to be put to work cleaning officials’ compounds and there have been persistent rumours of them being compelled to provide free labour for the private benefit of prison officers and other well-connected government officials, as is the case in Uganda.

While in 1930 earnings from convicts’ labour accounted for a fifth of the total cost of the Prisons Department, the official goal today, as declared by the Ministry of Interior, is for the Department to transform into a “financially self-sustaining entity”. To achieve this, President Uhuru Kenyatta has created the Kenya Prisons Enterprise Corporation with the aim of “unlocking the revenue potential of the prisons industry” and to “foster ease of entry into partnership with the private sector”.

This basically entails deeper exploitation of prisoners’ labour. And even though Kenyatta speaks of improving remuneration, it is notable that this is not a free exchange. Whatever the courts might say, it is clear that the state and its owners feel entitled to the labour of those they have incarcerated, much like their predecessors (the colonial regime and the European settlers) once felt entitled to African labour.

This will sound familiar to many Kenyans today whose encounters with the police often begin with demands for the production of the kipande (ID card) and end with a stint in overcrowded police cells. However, there are some differences. An audit of pre-trial detention…found that police generally arrested and charged people for petty offences, with close to half of those arrests occurring over weekends.

In this regard, the attitude is very like that of the white settler in Kiambu, Henry Tarlton, who told the 1912 Native Labour Commission regarding desertion by African workers that “this is my busiest season and my work is entirely upset, and it is hardly surprising if I am in a red-hot state bordering on a desire to murder everyone with a black skin who comes within sight”. Another white settler, Frank Watkins, in a letter to the East African Standard in 1927 boasted of his “methods of handling and working labour”, which included “thrash[ing] my boys if they deserve it”.

This brutality, especially directed towards African males, was paired with forced labour from the very onset of the colonial experience. (Brett Shadle, Professor and Chair of the Department of History at Virginia Tech, notes that the settlers were much more reticent about their violence on African women, which tended to be sexual in nature.) These settlers were already pushing the colonial state to institute unpaid forced labour on public works projects in the reserves (which it eventually did) as a means of driving Africans to wage employment for Europeans.

But it was within the prison system and Mau Mau detention camps that the practice of forced labour found its full expression. According to Christian G. De Vito and Alex Lichtenstein, “Conditions inside the detention camps created in Kenya in the 1910s and 1920s and in the prison camps opened in 1933 depended on the assumption that forced labour, together with corporal punishment, could actually serve as the only effective forms of penal discipline.” The influx of Mau Mau detainees, they explained, overwhelmed the system “since police repression by far exceeded the capacity of the already overcrowded prisons, and the colonial government decided to establish a network of camps, collectively called the ‘Pipeline’, characterized by violence, torture, and forced labour.”

“It is also worth thinking about what happens to the prison at the end of colonialism,” says Prof Anderson. “There is no movement for prison reform in Kenya after 1963 – rather the opposite: the prison regime becomes harsher and is even less well funded than it was in colonial times. By the end of the 1960s, Kenya is being heavily criticised by international groups for the declining state of its prison system and the tendency to violence and abuse of human rights within the system.”

Prof Daniel Branch stresses that “post-colonial prisons urgently need a history. The Mau Mau period rightly gets lots of attention, but there’s very little by scholars on the post-colonial period”.

It is critical, as Kenya marks a decade since the promulgation of the 2010 constitution, that we keep in mind Mandela’s words and ask whether, if at all, it has changed how those condemned by society – “our lowest ones” – are treated. That will, in the end, be the true measure of our transformation.