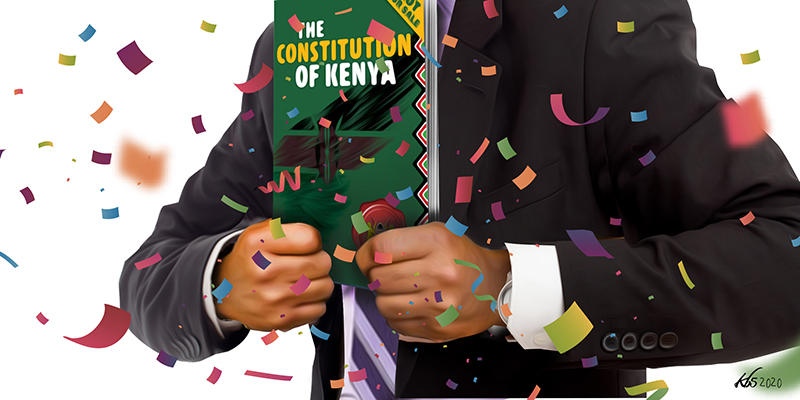 In the last few weeks, the country has witnessed a roller coaster drama on revenue allocation in the senate. There has been shouting, singing, threats of prosecution for alleged default on taxes, pushing and shoving for the microphone, dramatic gesturing from the rostrum, and arrests. At the centre of it all has been Speaker Kenneth Lusaka who, with each passing moment, looks more clueless and unable to offer leadership.

There have also been the unintended outcomes—one of which is high-level constitutional education on revenue sharing and how the senate works. I will return to this shortly.

A strong and resilient constitution

But perhaps what has been lost in the revenue formula hullabaloo is how the moment has proved that we have a solid and resilient constitution—and no, that is not sarcasm. Let me elaborate.

Good democratic constitutions provide strong checks and balances. Effective checks and balances ensure that power is dispersed and not concentrated either in an individual or in one institution. Unlike the current constitution, the 1969 Constitution centralised power around the president. Essentially the president had significant control on parliament. He appointed ministers from among members of parliament and hence most MPs were overly loyal to the president to bolster their chances of being elevated to ministerial jobs. Additionally, the president had significant say on who constituted the leadership of parliament, including the speaker, leader of government business, heads of departmental committees—name it. The president also had immense powers in resource allocation, directly but also through his ministers. Hence, it was not unusual for the constituencies of those MPs who were perceived to be opposed to the president to be starved of resources and maendeleo.

Because bad habits take long to erase, in practice—and especially for Uhuru Kenyatta—there is still some obsession with the imperial presidency. This explains why Uhuru used intimidation, de-whipping and the political party disciplinary infrastructure—and other nefarious tactics—to keep a tight leash on MPs. However, unlike the former constitution, the law does not support his obsession with an imperial presidency hence the constant pushback and legitimacy challenges he has faced even from within his party. The current wrangles in the senate on the revenue allocation formula are a classic example of how the constitution is designed to respond in order to protect itself and an institution (in this case the senate) that constitutionally should be largely autonomous.

In many ways the tensions are therefore a hallmark of a good constitution. But first, some basic information on revenue allocation.

The constitution provides the senate with the power to provide a regulatory framework on most of the issues that affect the counties. Determination of the level of funding allocated to a county is perhaps one of the more critical roles of the senate.

What is high-stakes then is the fixing of the formula every fifth year and that is the moment in which we now find ourselves. But beneath all the drama, there are great and complex workings of the constitution.

The constitution on overdrive

While the role of the senate in deciding on the formula is political, the constitution had the foresight to temper it with significant technical and expert input. The Commission on Revenue Allocation (CRA) is required to professionally determine the relevant factors and develop the technical criteria that should guide the development of the formula and make recommendations to the senate. While the CRA’s recommendation is not binding on the senate, on a comparable issue, the court has determined that if parliament was to deviate significantly from the criteria developed by CRA, it must have good reasons for doing so.

In the run-up to this revenue allocation formula vote, there was a stark political alignment emerging in parliament anchored on the politics of the handshake and the Building Bridges Initiative (BBI). On one side were MPs who supported Uhuru Kenyatta and Raila Odinga and on the other those perceived to be loyal to Deputy President William Ruto. Punishment had already been meted out on perceived renegades who went against Uhuru’s and Raila’s wishes, with Kipchumba Murkomen, Susan Kihika and Kithure Kindiki losing their prime positions in the senate. Those considered to be the president and Raila’s yes men and women were the beneficiaries—among them, the colourless Samuel Poghisio and the self-irritable Murang’a Senator Irungu Kang’ata. In many ways, one would have thought that the line was drawn on marble—that Garissa Senator Yussuf Haji, who heads the BBI, would always vote according to the president wishes and that my home senator, Susan Kihika, would oppose what was favoured by Uhuru and Raila.

Then the first round of voting took place.

Many senators perceived to be Deputy President Ruto’s allies voted in support of the one-man-one-shilling formula and Yusuf Haji and the Isiolo Senator Fatuma Dulo, who is also deputy majority leader in the senate, voted against. There were outliers. Among them, Mutula Kilonzo (Makueni), Kipchumba Murkomen (Elgeyo Marakwet), Johnson Sakaja (Nairobi) and Kabaka Mutinda (Machakos).

This tells us a story about the intricacies and complexities of our constitution—about the true and practical restraints on power that the constitution has established to guard against the possibility of run-away authoritarianism. The constitution gives parliament significant power—although with the current parliament that is not always readily discernible. MPs now control how government resources are allocated, including how much to allocate to the presidency or the president’s favoured projects. Through vetting, they can decide who the president does not hire as cabinet or principal secretary. And the ultimate fate of the president largely lies with parliament based on its power to impeach. If and when MPs fully appreciate the extent of their powers they will be the best and most effective check on the president and his incorrigible executive.

However, their exercise of this enormous constitutional power does not go unchecked. One of the critical checks are the people. This is perhaps part of what explains the seemingly crazy voting matrix on the revenue allocation formula. MPs have their voters to answer to, and I guess they are aware that, on devolution and resource allocation, voters are extra-attentive. Critically, not only does the constitution give the voters the traditional tool of the general election to kick out those representatives they are unhappy with, it also gives them a tool of recall which they can use midway through an MP’s term to remove him or her from office.

Moreover, the constitution has also created space for idealists by providing that leadership should be value-based and enumerating some of those values to include nationalism and protection of the marginalised. Hence, while one may have thought that all senators would be waiting for the signal from Uhuru, Raila and Ruto on which way to vote, the constitutional labyrinth of accountability made the decision for most of them much more complex than just the sighting of a signal.

The constitutional design on checks and balances also overcame even the nefarious scheme of abduction and arrests as the ultimate tactic to keep away some of the senators from the vote.

An indispensable tool of an imperial presidency is the control of the instruments of state violence. In Kenya, at the peak of the instruments of violence sits the police. Because the division on votes was so tight, it meant that if just three of the senators who are opposed to the handshake revenue allocation formula were prevented from voting, then Uhuru and Raila’s formula would triumph. The last card was played. The police stepped in and arrested three senators on the eve or the morning of the symbolic vote: Senator Cleophas Malala of Kakamega, Senator Christopher Langat of Bomet and Senator Steve Lelegwe of Samburu.

But the constitution had anticipated such simple authoritarian tricks would be attempted in order to subvert it.

Voting in the senate is a complex affair. The senate has 67 members of which 47 are directly elected and 20 are elected through party lists. Because those elected through party lists are more likely to be loyalists of the party leadership and much more politically vulnerable, the constitution anticipated that they could unfairly skew voting on critical matters that required equality of the vote between counties.

Theoretically, it is possible that all the 20 party-list senators could be from the same region—which means that if there is voting in the senate on an issue that affects all counties, then the region from which most party-list senators come would be significantly advantaged if all senators (elected and party-list) were allowed to vote. To remove the possibility of this unfair outcome, on some matters (those affecting counties) the constitution requires that voting at the senate be through a delegation—meaning that every county gets one vote and if there is more than one senator from a county (elected plus party-list), then only one vote is counted for that county. The elected senator is the leader of the delegation and has the ultimate say on how his or her delegation votes. He or she must also give written confirmation to the speaker on who he or she has authorised to vote on behalf of the delegation in his or her absence. He or she can revoke the authorisation at any time by written notice to the speaker.

This explains why Malala, Langat and Lelegwe were the ones targeted for arrest. They come from counties which have party-list senators. If they were not physically present in the senate to vote, the other senators in their delegation would be eligible to vote. It was expected that these party-list senators would help Uhuru and Raila’s formula to sail through.

Not so fast. The three senators wrote to the speaker from detention revoking the authorisation for those in their delegation to vote on behalf of their counties. The impact of the arrest had been neutralised.

In the end (if there is an end) this means that what is left now is for senators to find a way—without coercion or intimidation—to negotiate and develop a formula that is fair and largely acceptable to all parts of the country. In such negotiations, those senators from traditionally marginalised counties have as much power as those who constantly find favour to sit on the laps of the president and Raila Odinga. The outcome will likely not be skewed in favour of Raila’s and Uhuru’s wishes. It will also not be written under the heavy breathing of Senator Kang’ata. It will involve significant and complex balancing.

Ultimately, it should not be a “win-win” or a “one-man-one-shilling” formula. It should, instead, be the formula that the constitution intended.