Saba Saba and the Evolution of Citizen Power 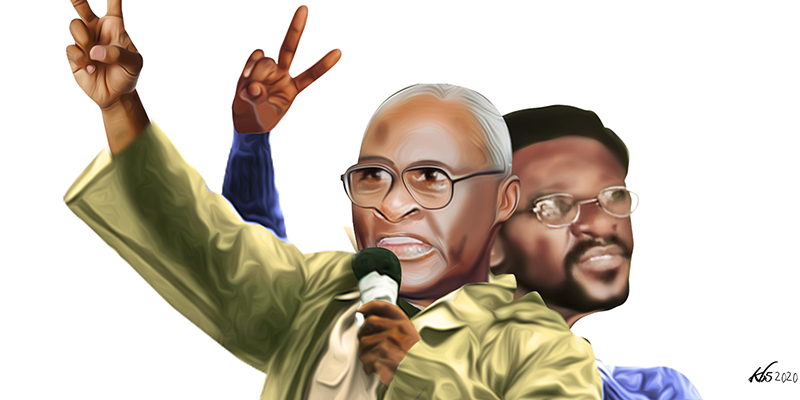 Hands stretch out into the air, flashing the two-finger V-salute as the Toyota pick-up truck, with loudspeakers mounted on its roof, careens over the kerb and back onto the rutted road.

That iconic image of Martin Shikuku, James Orengo, Philip Gachoka and Rumba Kinuthia is etched in the minds of some 20 million Kenyans who were alive on the fateful day that marked the struggle for political pluralism in the country. The November 16, 1991 picture is a re-enactment of what should have happened on July 7, 1990 – the day known by its Kiswahili translation, Saba Saba, in reference to the seventh day of the seventh month.

The men perched atop the car had just changed vehicles after police shot at their truck’s tyre in an attempt to stop them from entering the barricaded Kamukunji grounds on the rim of Nairobi River, which was darkened by sewage and grease, and whose smells fused with clouds of tear gas in the air. It had been 16 months since the first attempt to hold a rally at Kamukunji failed.

On the gray cold morning of Saturday, July 7, 1990, reaching Kamukunji had acquired an urgency symbolising a break in the dam of political repression.

An attempted coup d’état by junior air force officers eight years earlier had floundered and given Daniel arap Moi, only four years into his presidency, the excuse to turn the screws on all opposition.

Dissent had been brewing in Kenya since Moi began consolidating political power by changing the constitution to ban multiparty politics and detaining critics (some of whom fled into exile. But the failed putsch emboldened Moi to take away judges’ security of tenure, and to blatantly rig the 1988 elections, which filled Parliament with his lackeys.

The lone government-owned radio and television service ruled the airwaves, alongside “free” newspapers that would not go to press until State House supplied its front-page photograph of Moi, and whose editors regularly fielded calls from the president. In those days, Kenyans relied on the British Broadcasting Corporation (BBC)’s Kiswahili Service to learn what was going on in their own country.

Five months prior to the planned Saba Saba meeting, Moi’s foreign minister, Robert Ouko, had been brutally killed. Ouko’s dismembered body was dumped on a hill in his rural constituency. It was widely believed that his murder had been planned by people close to Moi.

Kenya was suffocating under the armpits of Moi’s single-party regime. He held the bureaucracy and the security apparatus in a firm grip; Parliament sang his song; and the judiciary was cowed into sniveling subservience. He had declared debate on multiparty politics stirred by clerics closed even before it began.

Open defiance seemed like the only channel for starting a national conversation.

As its opening gambit, the Moi government declared the Kamukunji meeting illegal, and arrested Kenneth Matiba, Charles Rubia and Raila Odinga, three of the senior politicians who were organising it, before subsequently detaining them without trial.

Kenya was suffocating under the armpits of Moi’s single-party regime. He held the bureaucracy and the security apparatus in a firm grip; Parliament sang his song; and the judiciary was cowed into sniveling subservience.

Other countries confronted with dictatorship in Africa had often gone the way of the muzzle with military coups d’etat; Kenyans put themselves on the line at the risk of permanently separating body from soul. The men on the pick-up truck were the second-tier leaders, and there was another tier below them, and yet another across the length and breadth of the country.

A movement – dubbed “The Second Liberation” – began to form in spite of restrictive laws on assembly and association, grouping people together in organising cells.

Saba Saba had been prefaced by the mysterious appearance of leaflets secretly printed and dropped around the country, inviting people to the meeting. Relying on a network of football clubs and private sector transport workers (matatu touts) travelling across the nation, people were put on buses to Nairobi for the day of confrontation. It put a match to the tinder that had piled across the country and exploded into four days of confrontations between the police and the public. The wall of fear had cracked.

When national newspapers and the international media chalked up the tally, there were 39 dead, 69 injured, and over 5,000 arrested – with over 1,000 charged with looting and rioting.

Saba Saba was the first serious organised challenge to repression through defiance. It was meant to be the first of eight public rallies – one in each province – to rally the public for plural politics and open government. Frantic attempts would subsequently be made to negotiate down demands for freedom by offering internal reforms in the ruling political party monopoly, KANU, but they were insufficient to stem the tide of change.

When national newspapers and the international media chalked up the tally, there were 39 dead, 69 injured, and over 5,000 arrested – with over 1,000 charged with looting and rioting.

Sixteen months after Saba Saba, Moi grudgingly capitulated and agreed to term limits and to repealing constitutional bans on multiparty political organising, only to use this as an instrument for fanning ethnic animosity. Within months of the return of political pluralism, some 19 new political parties had been registered by dint of the efforts of state operatives, who also engineered a split inside the opposition Forum for the Restoration of Democracy (FORD) party.

A miscarriage of democracy

Moi retained power for two terms despite securing only a minority of the votes in the 1992 and 1997 elections. The spirit of Saba Saba revisited the country in a series of protests on July 7; then August 8; September 9 and October 10, 1997 in attempts to demand free and fair elections.

Moi split the movement by offering compromises to share slots in the electoral management agency with the opposition and repeal laws constraining public assembly. Once again, it seemed that the Saba Saba campaigners had only achieved a Pyrrhic victory.

The euphoric victory of the joint opposition candidate, Mwai Kibaki, in the 2002 election when Moi was retiring imbued the nation with a new sense of optimism and the possibility of citizens reclaiming their power. But this optimism was quickly dashed by regression to some of the old wily ways, including mega corruption scandals.

It took the violent and bloody protests in the aftermath of the 2007 election – a citizens’ revolt against loss of confidence in the judiciary and the electoral body – to produce a new constitution in 2010. The post-2007 election violence recorded over 1,300 deaths, over 5,000 injuries and rapes, as well as massive displacement – which invited the attention of the International Criminal Court (ICC).

Many of the people who were at the forefront of the Saba Saba protests have died or have been accommodated in the rapacious state. As the state grows more dangerous in deploying deadly force in a throwback to the dictatorship of yore, the public appears friendless and with few defenders.

Still, the spirit of citizen power that fuelled Saba Saba still roams the land like a vagabond. The pain, angst and trauma of decades of protest have blunted the desire for public-spirited action, only interrupted intermittently by fresh outrages.

The Kenyan state remains colonial in its true nature, ceding nothing even when it offers backhanded half measures to stall demands for citizen power. Cycles of reform have delivered piecemeal change in slow, grudging steps that are often also characterised by blowback. Changes to the executive to share its power with county governments continue to be undermined; Parliament appears to have lost power and public trust; and the judiciary is fighting daily for its independence.

Plural politics and expanded public voice have not resolved many of the problems that make life in Kenya a seesaw between hope and despair. Police routinely break up peaceful assemblies and turn them into riots, complete with clouds of tear gas, truncheons raining down on bodies and bullets cutting through crowds.

Yet, some things have changed. Citizens may still not control the organs of the state –and there is great frustration with the government from which they are alienated – but they continue to claim their power through an intersection of greater awareness, increased voice and technology.

The Kenyan state remains colonial in its true nature, ceding nothing even when it offers backhanded half measures to stall demands for citizen power. Cycles of reform have delivered piecemeal change in slow, grudging steps that are often also characterised by blowback.

Sometimes, these strides can appear insufficient, but citizens have overcome their fear of dictatorship, and continue to evolve new tactics to make their voices heard even in the potentially repressive context.

Between that seismic Saba Saba event and the passage of a new constitution in August 2010, some 17.1 million Kenyan children were born and continue to walk the earth. The children of Saba Saba, progenies of the legacy of struggle, have come of age but they have not always been shielded from the scars of the history that birthed their freedom. They are better educated, more expressive and greatly aided by technology, but they continue to wallow in want, are beset by unemployment and are confronted daily by police brutality.

With 45 million Internet subscriptions, Kenyans are the continent’s second largest social media users, after South Africa. Young Kenyans are most active on WhatsApp and Facebook, but it is the fabled Kenyans on Twitter (#KOT) who routinely take down the country’s critics and wage war on perceived moral or ethical wrongs within and across borders.

In April 2020, Deputy President William Ruto blocked US-based Kenyan law scholar Makau Mutua on Twitter over the latter’s criticism of him. Last year, President Uhuru Kenyatta suspended his social media accounts – only a year after deactivating multiple accounts when he came up for air from a deluge of criticism that threatened to engulf him online.

Freedom is never given; it is won. The lesson of Saba Saba needs to be preserved through the generations because it reproduces the courage of the independence struggle in which ordinary people stand up to those who bully them.

It remains to be seen whether mobile phones and computer keyboards will be sufficient to hold the dam.