The Real Story Behind the Dams Scam 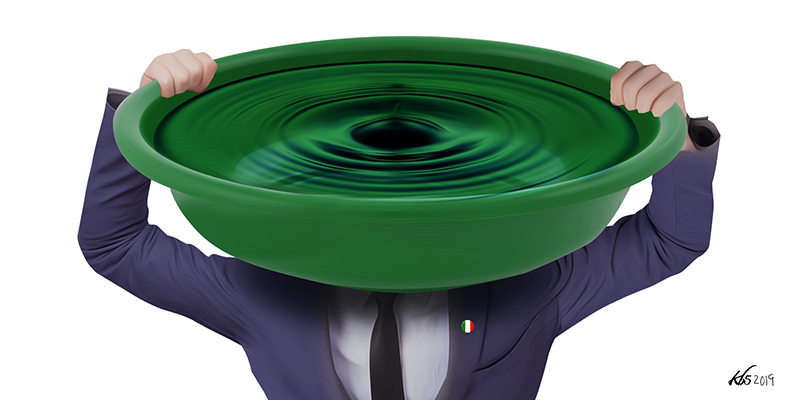 Since the 1970s, Kenya has been considered by convicted Italian criminals as a safe haven – a place to hide from justice. A recent tide has, however, occurred and now some of these criminals have been extradited after spending years enjoying the “good vibes” of the Kenyan sea shores, especially in their stronghold Malindi. It seems to be the end of an era marked by impunity as Kenyan authorities have started pursuing alleged felonies committed by Italians living in Kenya. The authorities are not just going after individuals, but companies as well.

On the 29th of July this year, the Milimani Chief Magistrate’s court in Nairobi allowed Kenya’s Director of Public Prosecutions (DPP), Noordin Haji, to issue an arrest warrant for the Italian citizen Paolo Porcelli, the CEO of CMC (Cooperativa Muratori e Cementisti) from Ravenna. Porcelli is charged with abuse of office, bid-rigging and misuse of public funds and could face jail time if he returns to Kenya. With him on the list of the indicted there is also the Italian joint venture between the Italian companies Itinera (Gavio Group) and CMC.

Porcelli declined to appear in court twice. “Porcelli is a fugitive. Despite being given the opportunity, he hasn’t presented himself in court for a second time,” DPP Special Prosecutor Taib Ali Taib told the court. “The Italians think they can break the law and get away with it contemptuously. They believe nothing will come out of it.  Don’t allow it, your honour”.

Porcelli’s lawyers have a different opinion on his judicial status in Kenya: they explained that the indictment has charges only against the Kenyan top officials involved in the case. “It is not clear, and it is not explained [by the investigators] why Mr Porcelli and the joint venture CMC-Itinera could be indicted for the only charges they have, namely cashing in the deposit on the construction as it was agreed upon the contracts.”

The arrest warrant issued to the Italian manager is the latest development in a long saga reported in the international media as the “dams scam”. This story has many facets: the alleged criminal conduct of the Italian company in Kenya (CMC declines any involvement, claiming its innocence); the blatant lies and unfulfilled promises to the local population living around the proposed dams area; and the way local politicians turned Kenya’s natural assets into a personal gold mine.

CMC is a giant company in the field of construction globally. Wherever there is an important tender, the company is among the bidders. However, the glorious history of the company didn’t guarantee CMC’s success – construction is a competitive sector around the world. Sometimes to be awarded a tender, managers have to cross the line between lobbying and corruption.

In 2014, CMC signed a consultancy contract with Primo Greganti, a businessman and former politician who was arrested for alleged corruption: he would have helped some companies to be granted tenders for the construction of the site of Expo Milan 2015, the world food exhibition hosted in the Italian city.  The trial ended in a plea: in the Italian judiciary system, it means there is no verdict on the culpability of the defendant.

This story has many facets: the alleged criminal conduct of the Italian company in Kenya; the blatant lies and unfulfilled promises to the local population living around the proposed dams area; and the way local politicians turned Kenya’s natural assets into a personal gold mine.

The company was effectively granted a six million euro tender for the recovery of the land of the so called “plate”, the foundation for the exhibition facilities. At the end of the work, the final cost skyrocketed to 30 million euros because of differences caused by unexpected changes in the project. These extra costs were heavily criticised by the Expo 2015 board members because there were no grounds for justifying them. But because time for the construction at the site was running out, nobody within the board could reject the CMC’s requests. CMC was also awarded the tender for the construction of one of the French pavilions at the exhibition.

In May 2018, the company issued a press release on its financial situation. Under “total turnover” it reads: “Decreased from €289.0 million to €258.2 million. In particular, construction revenue decreased from €278.0 million to €236.7 million, due to a €23.0 million reduction overseas and an €18.3 million reduction in Italy. A significant increase is expected from certain projects achieving full production stage and from the start of the new project secured in recent quarters.”

In another press release issued in November last year, the company stated: “The Board unanimously concurred that, in a market context that was already structurally problematic, for reasons that arose spontaneously without any predictability, linked to non-receipts of orders and/or the state of progress of work, the Company is facing a moment of cash-flow tension.”

The main “non-receipts of order” at that time was Anas, the Italian company partially controlled by the state and in charge of maintaining and managing Italian highways. With the Kenya dams tender, it seemed that the cash flow problem might be solved. Kenya and Nepal were at that point considered as possible anchors that could recover the company’s accounts. One of the primary goals of the managers, therefore, was to immediately cash in on the advances made on work yet to be carried out. And this is when new problems arose.

The masterminds targeted by the investigation

CMC in Kenya has been granted contracts worth almost 800 million euros for the construction of the dams at Arror and Kimwarer. The awarding of the tender was officially presented during a meeting between the former Italian Prime Minister, Matteo Renzi, and President Uhuru Kenyatta. Both projects were expected to provide water to the population of the Rift Valley. According to the 2017 annual budget of CMC, Kenya was among the list of countries that contributed to expand the productivity of the company. Two years later, the situation is totally different.

In Italy, the authors of this article have since March been investigating the Kenyan dams case for La Verità, a right wing newspaper. The newspaper discovered a contract signed in 2013 between CMC and Stansha Limited, the company associated with the Lamu West MP, Stanley Muthama who was arrested on 28th June for tax evasion. It is a consultancy contract granting Muthama a fixed fee of 3 per cent in case CMC signs a contract with local development authorities in Kenya.

CMC in Kenya has been granted contracts worth almost 800 million euros for the construction of the dams at Arror and Kimwarer. The awarding of the tender was officially presented during a meeting between the former Italian Prime Minister, Matteo Renzi, and President Uhuru Kenyatta.

In that case, it was the Itare dam, another project to supply water in the Rift Valley, which apparently is not included in the current investigation. The investigation went silent until 22nd July when 28 other people were arrested on a different charge: international corruption. Among them was the Italian CEO, Paolo Porcelli, and Kenya’s Treasury Cabinet Secretary, Henry Rotich. The Italian prosecutor Lucia Lotti is handling the case in Rome, with the option to file a new investigation in Italy as well.

As is everything in Kenya now, this case could be framed as the battle between Uhuru and his number 2 in the 2022 election campaign, William Ruto. It has been suggested that Ruto could be using the Italian company for political support. Ruto’s daughter, June Chepchirchir, holds a senior position as the second counselor at the Kenyan embassy in Rome, Italy.

A key moment in diplomatic relations

The investigation on CMC Itinera is happening at a sensitive moment. Kenya and Italy are trying to collaborate on the Silvia Romano kidnapping. The 23-year-old Italian volunteer, who worked for the Italian charity Africa Milele, was abducted on 20th November last year from Chakama village in Kilifi County. But since then there has been no substantial information on her situation, apart from the trial of Gababa Wariu and Moses Lwari Chende, who confessed to aiding Romano’s abduction. But the investigation so far has not resulted in finding her.

In Italy the absence of updates on Silvia Romano’s health conditions are considered very alarming. At the same time, there is a new ongoing effort in Italy to have Romano released. The Kenyan head of public prosecutions, Noordin Haji, and Italian prosecutors in Rome are discussing a common strategy on the issue. If no positive results are achieved, the predictable outcome could be the cooling down of business and diplomatic relations between the two countries, at least in the initial stages.

The investigation on CMC Itinera is happening at a sensitive moment. Kenya and Italy are trying to collaborate on the Silvia Romano kidnapping. The 23-year-old Italian volunteer, who worked for the Italian charity Africa Milele, was kidnapped on 20th November last year from Chakama village in Kilifi County.

While Italy is grappling with the dams scandal and the search for Silvia Romano, France is trying to find a foothold in East Africa by signing new contracts with the Kenyan government. Rivalry in bilateral relationships in Africa is always a hot issue within the European Union (EU) member states, who have been unable to come up with a single comprehensive strategy for how EU member states should deal with African governments.

A possible read on the dams case is that William Ruto was the guarantor for the Italians and he can’t assure them anymore because he is currently dealing with bigger challenges related to his re-election campaign, which has been marred by corruption scandals implicating individuals from his political camp.

For additional information on the Arrow and Kimwarer Dams saga see links below.

A consultancy agreement between C.M.C. di Ravenna South Africa Branch and Stansha Limited (a company registered in Kenya) for the general purposes to provide consultancy services for the Itare Dam and Ruiru II Dam project under Athi Water Service Board.

DPP’s press statement on investigations concerning KVDA and Rift Valley Water Services Board
Following complaints to the Government of Kenya has been exposed to the loss of billions of shillings arising out of manipulation of the tendering process of several dam projects including the Arrow dam, Kimwarer dam, Itare dam, Embobut multi-purpose dam, Lower Turkwell irrigation scheme et.al the DPP’s office constituted a team of prosecutors to ensure the investigations of the aforementioned projects were carried out.