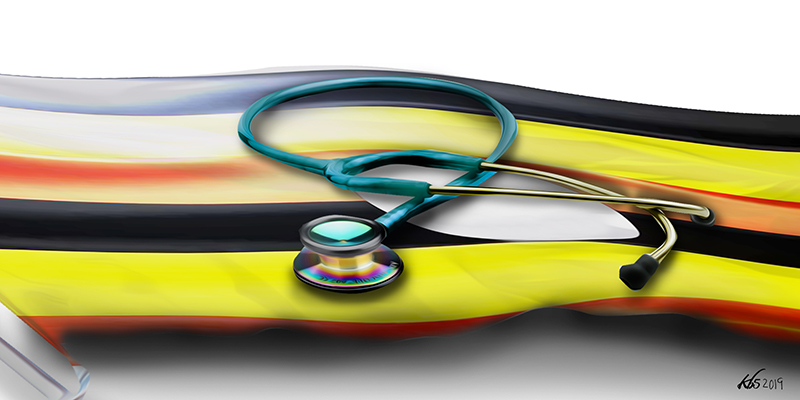 As a whole, public medical facilities in Uganda have been in the gutter for quite some time. In Kampala, the government attempted to shield us from this fact when it ambushed and took over the two new hospitals built under Jennifer Musisi’s tenure as Executive Director of Kampala City Council Authority. The city already had a number of health centres inherited from Kampala District; it was some of these that were to be transformed to branches of the National Referral Hospital.

Kiruddu and Kawempe hospitals are big, flashy and captivating at first sight but reality sets in once you enter them. They have essentially become the hospitals for the have-nots while the newly renovated Mulago has more or less been transformed into a private hospital catering to a different market.

The process was gradual, not based on consultation, and the changes were communicated in public announcements. Chiefly, that maternity care at Mulago Hospital, once free of charge, is now a chargeable service. Considerably higher rates were listed alongside the new charges in order to make them more palatable.

“Services will be classified as standard, VIP and VVIP; clinical services offered to all patients at all levels irrespective of pay. (Dr R. Aceng, Minister of Health). Charges at the Mulago Specialised Women and Neonatal Hospital begin at Shs.50,000 or US$ 13.57 for consultation, a sum equivalent to one-third of the minimum monthly wage and way above the actual average daily earnings of between US$1 and US$2. The upper limit for specialised treatment is Shs. million or US$ 814, which is twenty months’ pay at minimum wage. Accommodation alone costs Shs.80,000 per day. A Caesarian section goes for Shs.2 million ($542), with an extra Shs.200,000 for tubal ligation.

For neonates requiring surgery, charges are between Shs.1.5 and Shs.3.5 million. To clear a newborn baby’s airways costs Shs.300,000 (two months’ minimum wages) daily and to keep the baby on a ventilator (once the airways are cleared) costs Shs.1 million or US$271 per day. We shall return to the care of neonates later.

This arrangement was aimed at reducing maternal mortality, which is 336 maternal deaths per 100,000 live births compared to the global rate of 216 per 100,000 live births. The new Women’s Hospital built on the campus was meant to decongest Mulago National Specialised (formerly Referral) Hospital and enable women with complicated reproductive health problems to be treated and to reduce referrals abroad (Ministry of Health). However, since the launch of the privatised Mulago Hospital, the government has continued to fly public officials abroad for treatment, notably the Speaker of Parliament who was treated in Kenya for exhaustion.

Where the introduction of charges at Mulago has been successful is in decongesting it by driving women to the understaffed, under-equipped and overcrowded “national referral hospitals” at Kawempe and Kiruddu where between 80 and 100 babies are delivered daily.

Who are these displaced women? In 2003 the Health Sector Strategy review showed only about 20 per cent of women use government maternity facilities. These women are predominantly the poor without options, meaning that those displaced from Mulago are not the ones who would otherwise have opted for private domestic healthcare or care abroad. They are not in the market for in vitro fertilization and the other specialised treatments now offered at Mulago but primary health seekers. Their issues cannot be transferred out of existence. The rest of the birthing population who use hospital maternity services – say 80% if the statistic still holds – will continue to use private services and may or may not use Mulago or go abroad. A large number of women (25%) of those giving birth are simply not attended to by qualified birth attendants (2016, World Bank databank).

Kampala City Council Authority did not design Kiruddu and Kawempe Hospitals to take the spillover from Mulago, which explains the current crisis at Kawempe. Truth be told the situation has been dire for a while now. By the time the photograph of neonates stacked on beds and plastic chairs in nappies and nothing else except cannulas and nasal tubes caused a public outcry, medics who have been complaining about this for ages had grown weary and moved on. Following the outcry, the babies were transferred to Mulago Hospital and offered free services. Even then, there were complaints about the unaffordability of the meals, which remained chargeable.

The Ministry’s initial reaction was to deny the crisis and then raid Komamboga Health Centre III for cots, which did nothing to reassure the public and reportedly caused Komamboga staff to down their tools. When they finally bought cots it begged the question: if the money was available why were cots not bought in the first place?

It is hard to blame hospital management; since the hospitals opened, the directors and staff have strenuously reported their grievances to the Ministry of Health and other relevant authorities to no avail. That one photo has in many ways been a blessing in disguise; it has held a steady spotlight for longer than is usual on the state of health services.

The Ministry’s initial reaction was to deny the crisis and then raid Komamboga Health Centre III for cots, which did nothing to reassure the public and reportedly caused Komamboga staff to down their tools.

The Labour Suite at Kawempe is unbelievably busy, having essentially inherited all the clientele that used to go to Mulago; most health centres (such as Komamboga and Kisenyi) refer their patients there. It is not uncommon for Caesarian section kits to run out, with expectant mothers still in the queue. Consequently, we are always overwhelmed by the huge numbers in the nursery/Special Care Unit/Neonatal Units.

The inevitable result is that try as we might, even with triaging [prioritising the most serious cases], the general delays in patients’ seeking healthcare and the modes of transport of expectant mothers to hospital mean many babies are born with birth asphyxia. Birth asphyxia is basically poor oxygenation of the foetus occurring mostly during the period of delivery (parturition). Depending on its extent, the outcomes can range from Hypoxic Ischaemic Encephalopathy (HIE) Grade II which may leave the child with some deficits and conditions like epilepsy. In the worst cases, referred to as HIE Grade 3, if the neonate survives, the baby will develop cerebral palsy (CP). CP involves loss of muscle control which can affect mobility, speech, swallowing, bladder control etc. and is often accompanied by epilepsy. In our setting, in which support services are fewer than elsewhere, its impact on parents, whole families, not to mention the economy is devastating. While CP can be caused by diseases such as meningitis, cerebral malaria, encephalitis and even traumatic brain injury, in Uganda birth asphyxia is the main cause. One of the busiest children’s clinics at Mulago is the neurology clinic that sees children with CP.

It is hard to blame hospital management; since the hospitals opened, the directors and staff have strenuously reported their grievances to the Ministry of Health and other relevant authorities to no avail.

Many babies are born prematurely due to dangerous diseases like preeclampsia. These and other neonates at Kawempe Hospital require delicate care: daily antibiotics, two-hourly feeds, and the cannulas through which they are medicated (seen in the photo) may need to be changed. Emergency cases need nasogastric tubes, which help breathing, along with respirator bags and resuscitation.

All this often falls on the shoulders of just three nurses. Understaffing at Kawempe is exacerbated by the return of some midwives to the Women’s Hospital at Mulago. In fact there is a national shortage of midwives

On International Midwives Day 2019, the plight of the midwife in the current environment was revealed. A midwife at Bwizibwera Health Centre IV, which delivers an average of 150 babies a month, described their predicament. They face constant shortages of gloves and mama kits. Sometimes there is no fuel for the ambulance. All these are shortages to which the staff frequently contribute out of their own pockets and ask those mothers who can to pay, often leading to accusations of corruption.

“We need to be helped, I have worked for 15 years and what I have witnessed in health facilities is not good for us. They are always blaming midwives for charging money which in those cases it is unavoidable.” – T. Atukunda (New Vision)

The adverse effect on staffing levels is that many medics, specialists in particular, spend more time in private practice and research.

“I rotated through that place last year and it was horrible. I can’t say I enjoyed it because most of what we were doing was a charade. The morale of those that remain is low.” – (Doctor whose name has been withheld)

The Medical School has also been adversely impacted. While training used to take place at Mulago (close to the student accommodation), Obs/Gyn students must now make the trip to Kawempe and Internal Medicine students must travel to Kiruddu at a substantial cost.

Had there been adequate consultation and planning, Mulago would not have been fully shut down for renovation, certainly not for five years. Or at least a whole new private structure like the Women’s Hospital would have been built alongside it. Government has secured the US$350 million to build such a structure – Lubowa Hospital – while the renovations at Mulago only require US$9 million to complete. It is claimed that the Lubowa Hospital budget could have enabled the renovation and equipment of all Uganda’s regional hospitals as well as Mulago. As it is, US$35,874,800 has already gone missing from the Lubowa funds and is the subject of an inquiry.

In theory the Health Insurance Bill tabled in August 2019 will address most of these issues by making the cost of treatment affordable to government. A first attempt with a pilot scheme under the District Health Project ended without success in 2003, principally because of issues internal to the project i.e. an unrealistic timetable that led to the abandonment of the pilot and unsuccessful roll-out of untried interventions. There was also a lack of a monitoring and evaluation component. In the event, none of the health insurance schemes turned out to be appropriate.

As a final nail in the coffin, the government failed to top up the US$45 million loan with the US$17.5 million co-financing required. The co-financing shortfall is exactly half the amount that has now vanished from the Lubowa Hospital construction account. If anything indicates the lack of political will to deliver services, it is the failure of the District Health Services Scheme brought about by the failure of government to finance it.

There has been criticism of the public response to the crisis. True it should have come earlier, for example when the health insurance scheme failed to materialise fifteen years ago, or more recently in mid-2017 when the Auditor General reported, “Health facilities were experiencing persistent stock-outs of the 11 sampled Tracer drugs. […] Noticeably, Mama [safe delivery] Kits were out of stock for 320 days.” The very few medics who have commented on social media confessed boredom at the (short-term) public outrage coming decades into the problem.

Given the graphic view of the impact of haphazard and under-funded health services afforded by the Kawempe Hospital babies, the new Health Insurance Bill should be scrutinised very carefully by medics and laypeople alike working together to ensure that the interventions proposed have been rigorously pilot-tested and that the design faults that existed in the unsuccessful District Health Project proposals have been adequately addressed in the current ones.

This article is based on conversations with a Ugandan doctor about his experience as a clinician in public health in Kampala. Mary Serumaga takes responsibility for the statistical and archival material incorporated and any errors.