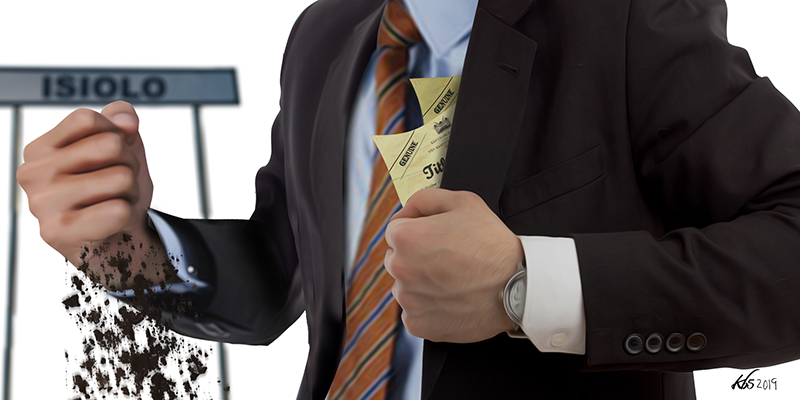 Kenya’s Vision 2030, which identified Isiolo as a strategic location in the hydrocarbon economy of the region, combined with the 2010 Constitution, which led to the devolution of power and resources, have thrust Isiolo County, a once sleepy and neglected former garrison town, into the El Dorado of Kenya’s future development.

However, Isiolo’s potential, if not judiciously managed, could turn the county into the future axis of natural resource-based conflict, especially in the large-scale irregularly acquired land by private corporations and individuals under the guise of community wildlife conservation. The consequences of what happens in Isiolo will likely spill over into other parts of Northern Kenya and Northern Rift Valley.

Like other parts of Northern Kenya, Isiolo lagged behind the rest of the country in economic development because of the government’s economic planning policies contained in Sessional Paper No 10 of 1965 “African Socialism and its Application to Planning in Kenya”, which created a dichotomy between low and high potential areas of the country. The reasoning was that the former would benefit from the trickle-down effect of the government’s investment in the latter. Isiolo was considered a low potential area, and thus received limited government investment. The community’s livelihood was based around livestock, which successive post-independence administrations considered economically unviable and antiquated compared to agriculture. This meant that the region received limited state support.

Parallel to limited investment, the post-colonial state continued with the colonial government’s policy of mediating its relations with Isiolo and the broader North Eastern region through the lens of security. If the British colonial administration used Northern Kenya and Isiolo as a buffer zone against Italians who were attempting to colonise Ethiopia and the French who were colonising Djibouti, the post-colonial state viewed Isiolo as a place where demands for secession, banditry and cattle rustling were rampant. This has made Isiolo one of the few counties with the most military schools and military barracks in the country. The military is also one of the largest landowners in Isiolo.

Like other parts of Northern Kenya, Isiolo lagged behind the rest of the country in economic development because of the government’s economic planning policies contained in Sessional Paper No 10 of 1965, which created a dichotomy between low and high potential areas of the country.

Vision 2030, Kenya’s development plan for making Kenya a middle-income country (MIC) by 2030, is perhaps the closest the state came to rectifying the problems created by Sessional Paper No. 10 of 1965. Vision 2030’s economic pillar aims to achieve an average economic growth rate of 10 per cent per annum and sustaining the same until 2030. If the core of Sessional Paper No 10 is centralised planning, thus creating a center and a periphery, Vision 2030 calls for decentralisation, thus blurring the distinction between peripheries and the centre. In fact, it aims to turn previously marginalised areas like Isiolo into centres of development.

Some of the major Vision 2030 projects of the economic pillar are either based in Isiolo or pass through the county. These projects include 6,500 acres of land at Kipsing Gap, which is about 20 kilometres west of Isiolo town and sandwiched between Katim and OlDonyoDegishi Hill, where a multi-billion shilling resort city will be based. Parts of the LAPSSET pipeline passes through the county, and the town is also where the Isiolo International Airport has been built. These projects are at different stages of being implemented.

When they finally take off, these projects will undoubtedly spur positive economic growth and improve peoples’ lives. Attention generated by these projects has also attracted “entrepreneurs” of all stripes with land as their primary key resource. Excision of huge chunks of land pose an existential threat to the pastoralist communities’ primary source of livelihood, which is already buffeted by multiple challenges, including climate change, agro-pastoralist conflict, and the ever-decreasing water and pasture because of demographic pressures.

Since tourism earns Kenya huge amounts of foreign exchange, it tends to be privileged over human life and pastoralists’ livelihoods.  For instance, during the 2017 clash involving pastoralists and wildlife conservancies in Laikipia, over 300 cattle were killed by the security agencies, and this act did not generate any condemnation.

Collective destruction of the pastoralist economy has historical precedent: The Truth, Justice and Reconciliation Commission found that the Kenyan army killed and confiscated livestock belonging to civilians in Northern Kenya. The shooting, especially of camels, was a particular strategy employed by the army as it was believed that camels were used by the Shifta to transport guns and other supplies. The Commission also revealed that it was common for soldiers and government officers to invade villages and confiscate cattle, sheep, camels and goats. The owners of such livestock were never told what happened to their livestock, nor were they ever compensated for their losses.

But the discovery of natural resources has suddenly changed the state’s engagement calculus with Northern Kenya, with the government making a beeline for the region, as demonstrated in the expansion of some of the often-neglected infrastructure. There is a sense that being among the least populated region, and being strategically close to the key borders of Somalia, Ethiopia and Sudan, the North has plenty of “free” land to be exploited.

But this courtship is anchored on a deterministic and reductionist single narrative: the free market. There is a belief that if the markets are opened in the region, all its problems will go away.

This narrative is problematic.  First, it assumes that the moment the region is linked to other parts of Kenya, it will automatically “develop”. Second, the creation of Northern Kenya in the image of the rest of Kenya at the very minimum denies the people the agency to determine what development means to them. Third, we need to be circumspect regarding the pervasive business language that assumes that the problem with public services is inefficiency and that technology is the answer. This techno fallacy and big data syndrome dehistoricises and decontextualises problems, and is ultimately bound to fail. Fourth, the market, while it can be efficient in allocating economic goods and services, is terrible as the arbiter of social services. Unleashing market forces onto the region will destroy the collective social fabric that has held these people together even in bad times.

Often unaccounted for in this framing is the pastoralist communities of Northern Kenya, which have been trading amongst themselves and with their counterparts across all the borders without government support. The mutually reinforcing twin issues of insecurity and a fragile ecosystem have engendered the communities’ remarkably innovative resilience instincts.

If everything around pastoralism is not securitised, pastoralists are infantilised. In the current wildlife private conservation paradigm – underwritten by well-heeled intergenerational wildlife conservation untouchable “royals” and marketed by a well-choreographed sleek PR machine – pastoralist communities who have lived in harmony with wildlife for generations are only used as worn-out tropes of the Messiah Complex. Kuki Gallmann, whose life is immortalised in the movie I Dreamed of Africa is cast as a noble White Saviour, keeping the wildlife and pastoralists safe.

If everything around pastoralism is not securitised, pastoralists are infantilised. In the current wildlife private conservation paradigm, pastoralist communities who have lived in harmony with wildlife for generations are only used as worn-out tropes of the Messiah Complex.

Lewa conservancy, which covers 62,000 acres and is a home to a wide variety of wildlife, including rare and endangered black rhinos, zebras and Sitatungas, as well as the “Big Five” wildlife animals.  Lewa’s value addition is held up as an aspirational model for other private wildlife conservancies.

However, the use of Lewa as a model for the future of Isiolo misses the dynamics inside Isiolo and for that matter elsewhere in the North. Laikipia County, where Lewa is located, doesn’t have nearly as many pastoralists as Isiolo does, which made the excision of such a huge tract of land possible. Additionally, the pastoral communities in Isiolo are diverse. Also not discussed when holding Lewa as a model is the failure of efforts at replicating Lewa inside Laikipia. For instance, establishment of a conservancy in OldoNyiro led to the community losing their land, forcing them to graze their livestock by the roadside because all the land has been fenced off.

Pastoralists in the area have been victims of various land grabs in the past and therefore view conservancies as a Trojan horse that will lead to further annexation of their pastoral rangelands.

At the heart of the establishment of the conservancies is the argument of return on investment: having “community” wildlife conservancies will allow pastoralists to have a stable income. But there is no conservancy that can guarantee the pastoralist the same kind of return that they can get from their livestock.

Devolution of power and resources to the county was designed as an antidote to centralised decision-making in Nairobi, which resulted in unbalanced and unequal economic development. What the framers of the constitution did not envisage, however, was the quality of representation that will shepherd devolution at the county level. The disparity between counties with good leaders and those with poor leaders is well documented.

But Isiolo’s land grab did not happen in a vacuum; it has been facilitated by poor leadership. The establishment of wildlife conservancies in Isiolo is a shot across the bow for other counties, such as Marsabit County. If they are not stopped, we could be walking into land-related conflicts with our eyes wide open.

The large-scale land grab in Isiolo by NRT will adversely impact the pastoralists’ livelihood, and generate new conflicts in an area blighted by incessant conflict. This will erode the potential Isiolo would have gained from devolution, Vision 2030 and its proximity to Ethiopia, which has the potential to increase cross-border trade.