Liberty for Whom? D-Day’s African Ghosts 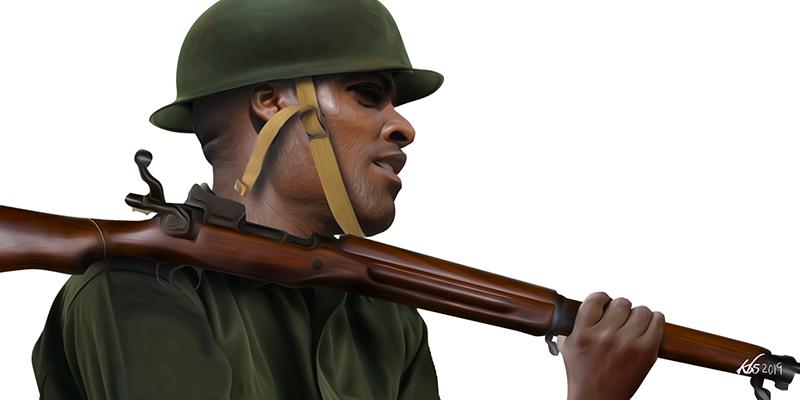 Three-quarters of a century ago, hundreds of thousands of Allied troops stormed the beaches of Normandy in what was the start of a war to save Western Europe from Nazi occupation. American and European leaders gathered at the scene last week to memorialise and honour those who fell, including on the German side. The US President, Donald Trump, began his tribute to them thus: “On this day 75 years ago, 10,000 men shed their blood and thousands sacrificed their lives for their brothers, for their countries, and for the survival of liberty.”

Undoubtedly, much of that is true. From the perspective of those in occupied Europe, it was the beginning of their liberation and the defeat of fascist tyranny. It would inaugurate, for many, an era of democratic freedom and economic prosperity that was at the time unparalleled in history.

Africa tends to be swept under the carpet in the memorials for the two World Wars, which are always couched in terms of, again to borrow a phrase from Trump’s speech, “the ferocious eternal struggle between good and evil” – the Germans being branded as the ultimate evil and the Allies being the forces of good.

President Trump went on to state that “the GIs who boarded the landing craft that morning knew that they carried on their shoulders not just the pack of a soldier but the fate of the world.” This may be true, but the world is not just Western Europe; from the perspective of those on the African continent, the GIs were not there to shore up liberty and democracy, but rather to free countries that were themselves engaged in colonial plunder and occupation.

Africa tends to be swept under the carpet in the memorials for the two World Wars, which are always couched in terms of, again to borrow a phrase from Trump’s speech, “the ferocious eternal struggle between good and evil” – the Germans being branded as the ultimate evil and the Allies being the forces of good.

But there was little that was “good” about what these same countries were doing and would continue to do to the people in Africa whose land and resources they were continuing to steal and whose people they not only oppressed but also press-ganged into their wars. More than a million Africans fought in World War II – hundreds of thousands of them were sent to the front in Europe, others to India, Burma and the Pacific islands. Few understood why they were fighting, let alone why they volunteered to do it. Many died and survivors today receive nothing of the recognition and adulation bestowed on their European and American counterparts.

Now it is probably true that a world governed by the Nazis would have been much worse for Africans than the present one, so in that sense their defeat was good for the continent. But in that case, it could also be argued that the two World Wars, which exhausted the European powers and shattered the myth of white invincibility for the returning African veterans, were also good in that they paved the way for the end of colonialism. In either case, the uncontested fact would be that these were not wars to free all people but rather to determine who would be their overlords – despite the rhetoric, they were fought less for global liberation than for global domination.

David Frum, in his brilliant piece for The Atlantic, “The Ghosts of D-Day”, notes how the memory of D-Day and the liberation of Europe have been distorted in French and American imaginations. In truth, it is not just American memories that have “become more triumphalist and self-aggrandizing”. The memorials at Normandy are not so much about remembering history but rather spinning it. And within that spin, the tale of the Africans has no place – it muddies the moral waters to admit that the liberation the Allies sought did not include that of the black and brown peoples they were oppressing; that those on this continent had, and to a large extent still have, little share in the freedom that was heralded on that day.

However, what is today undeniable is that the Allies were guilty of committing, and would go on to commit, many of the same crimes that qualified the Nazis as evil – from implementing a racist occupation, to genocides, to interring entire communities in concentration camps, to jailing homosexuals, to looting cultural artefacts and art.

For Africans, the irony is that the tools for making concrete the memory of what the European nations were actually doing – the records and documents that tell the story of the occupation and the crimes that were committed against Africans – are, for the most part, either deliberately destroyed or safely hidden away in European vaults. Many were stolen at the end of the colonial occupation in an effort to maintain the fiction of its benevolence.

However, what is today undeniable is that the Allies were guilty of committing, and would go on to commit, many of the same crimes that qualified the Nazis as evil – from implementing a racist occupation, to genocides, to interring entire communities in concentration camps, to jailing homosexuals, to looting cultural artefacts and art. Yet, unlike the Germans, who have owned up to “the unforgettable rupture of civilization that [they] provoked in Europe” and to the fact that “the fallen German soldiers are resting in foreign soil not because they came as liberators to this country but as occupiers”, there has been no such admission from the Europeans with regard to their occupation of Africa. Today, they still repeat the lie that colonialism was about bringing civilization and the benefits of modernity to the primitive peoples of the continent rather than implementing a system of extraction that continues to bleed the continent to this very day.

In 2017, Bruce Gilley, a professor of political science at Portland State University, published the article, “The Case for Colonialism” (withdrawn after a public uproar and death threats), in which he argued that Western colonialism was both “objectively beneficial and subjectively legitimate”. He further advocated for “colonial modes of governance; by recolonizing some areas; and by creating new Western colonies from scratch”. While much of this has been debunked, he is hardly the only one to go public with such views. In the same year, the former leader of South Africa’s Democratic Alliance, Helen Zille, was removed from her leadership roles after she put out a series of tweets touting the benefits of colonialism.

Rather than the selective and hagiographic portrayals we are treated to today, a better memorial for D-Day would be to return the colonial archives and to acknowledge the truth – the whole, unvarnished truth – about what was being defended on that day. For it surely was not the ideal of liberty for all. Importantly, this would include an acknowledgement and compensation for the Africans who were forced to fight and die in the wars that were not of their making.