THE CHINESE DEBT TRAP: A new form of colonialism? 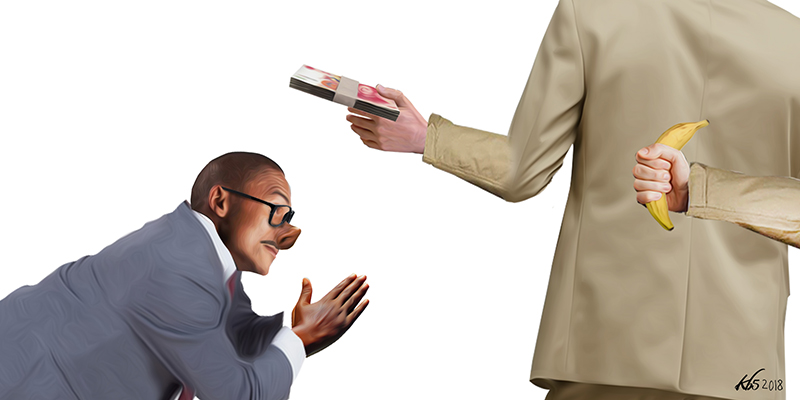 Although Chinese investments in Africa have been going on for nearly two decades, they are still labeled as new. This is because European chauvinism keeps the Old Continent denying the obvious: that it is not the only one with ties and connections to Africa. The Asian giant is already the biggest kid on this particular block and it is here to stay.

This situation is the reason why the African continent unpredictably turned into a new arena for economic war between the European Union and China. In the last 3 to 4 years, they have both turned their eyes towards Africa, mainly in a bid to address their own internal problems. The Europeans since 2015 have been collaborating to stem migrant flows from African countries, exchanging money and expertise for insurmountable borders. The Chinese, on the other hand, in trying to keep alive their dream of never-ending growth and prosperity, have found in Africa a virgin land to invest in, a destination for both money and workers. This is the context that has Europe and China courting African governments in a curious form of soft power rivalry.

In the 2000s, China established the first economical connection with Africa and since then Beijing has continued to consolidated its presence on the continent. The AidData project has mapped and geolocalised the Chinese efforts in Africa in this map.

By the end of 2018, Beijing will have pumped $60 billion – mainly in the form of commercial loans, investment funds and other financial instruments – into African economies for a vast variety of projects, the most well-known of which are gigantic infrastracture projects, such as the $4 billion railway from Addis Ababa to Djibouti built between 2011 and 2016.

In September, Chinese President Xi Jinping pledged to continue this scale of support for a further three years with another $60-billion programme. According to a McKinsey report released in 2017, there are more than 10,000 Chinese-owned small enterprises in Africa. As a matter of fact, China has become by far the largest investor in Africa.

By the end of 2018, Beijing will have pumped $60 billion – mainly in the form of commercial loans, investment funds and other financial instruments – into African economies for a vast variety of projects, the most well-known of which are gigantic infrastracture projects, such as the $4 billion railway from Addis Ababa to Djibouti built between 2011 and 2016.

The Chinese approach towards Africa is completely different from the European one. China’s engagement is economically-oriented. “Many Chinese projects require large investment and long pay-back terms that traditional donors are reluctant to provide,” Yun Sun from Brookings Education argued in 2014.

Though it may appear that Beijing’s patience is infinite, the truth is that China needs results in a short time. During the Forum on China-Africa Cooperation in September, Xi Jinping cautioned against “vanity projects” in Africa. This suggests that, unlike in the past, the Chinese purse will be tightened – projects will be funded only when they create value for Africa and China. However, as Yun Sun warned, “these short-term benefits should not form a cover-up for the potential long-term negative consequences associated with neglecting issues of governance, fairness and sustainability”.

Despite this rush in getting results, China in Africa is not viewed as a symbol of colonialism, especially because it isn’t a democracy-exporter. This still, however, raises questions over whether China is bringing a form of neocolonialism to the continent. This side of the Chinese coin is visible in the public debts of African economies. Analysts call it “the debt trap”. The China Africa Research Initiative at Johns Hopkins University calculates that China is the major holder of public debt in Africa, having lent $136 billion to the continent since 2000. “Angola alone has been granted loans of $42.2 billion, about half of the annual gross domestic product of the entire country. Zambia may soon have to restructure its debt, and it is a mixed blessing that the Ethiopian economic miracle is supported by $4 billion of Chinese money”, explained the senior investor Richard Harris in a commentary for the South China Morning Post, the prestigious Hong Kong daily newspaper.

In addition, Foresight Africa, in its 2018 report, highlighted that China has 14 per cent of the total debt stock in sub-Saharan Africa. In countries like Djibouti, which hosts the very first Chinese military base overseas, 80 per cent of the public debt is owed to China. It is likely this that made it possible for China, for the first time in its history, to extend inaugurate military ties with the country. Because of its geographical importance, Djibouti has the largest number of foreign military bases on earth, but China is the only country which can also wield the weapon of the economy.

In addition, Foresight Africa, in its 2018 report, highlighted that China has 14 per cent of the total debt stock in sub-Saharan Africa. In countries like Djibouti, which hosts the very first Chinese military base overseas, 80 per cent of the public debt is owed to China.

In China, concerns have been raised on the Belt and Road Initiative, the $4-8 trillion investment made by the Xi administration in order to expand the Chinese export and construction sector. Africa is part of the plan. The fact that China is the continent’s main holder of public debts leads to a question: Will Africa be able to repay it? If not, that could have consequences for the Chinese and African economies.

When Senegal was a French colony, the Dakaroise had to import and implement French law. When the British came to Kenya, they set up courts to serve their Common Law. Imposing your own rules on a foreign community is the first step on the road to colonialism. Step number two is exploiting natural resources and cheap labour for your own profit, which is what Europe has been doing in various forms on the continent since the 16th century. This history cannot be erased. The persistent exploitation of Africa led by Europe will forever taint Africa-Europe bilateral agreements. And for African kleptocrats, despite getting rich on European largesse, the “European enemy” is nonetheless a bankable narrative to get votes.

On the other hand, the European Union needs the cooperation of African governments like never before. Populism and the inability to regulate migration are two key factors in the European political crisis. European countries have found in the EU an easy scapegoat for the fears of the local population, which has resulted in a huge gap between the former values of the EU and the status quo. Brusells responded with an equally easy and mistaken solution: outsourcing the responsibility for migrants to the countries of origin in Africa. The European approach towards Africa since the Valletta Summit in 2015 is constantly orientated by this aim. Even when, in September, Jean-Claude Juncker, the European Commission President, promised to create 10 million jobs in Africa over the next five years with a “continent-to-continent” free trade agreement, in the same speech he added that Europe would hire 10,000 new border guards.

Economically speaking, even a united Europe will not be able to compete with China. This is no longer the century in which African governments were begging for “aid”. Africans have realised that slavery can come in the guise of help. Apart from money, there are still areas where old and tired Europe is able to outcompete China on the continent, such as capacity-building and training. These are the side elements, which when included in bilateral agreements – for example those between the EU and the Libyan and the Nigerien governments – will help Europe remain relevant.

In an inspiring speech in December 2017, the president of Ghana, Nana Akufo, said these words at the presence of French President Emmanuel Macron: “We can no longer continue to make policy for ourselves, in our country, in our region, in our continent on the basis of whatever support that the Western world or France, or the European Union can give us. It will not work. It has not worked and it will not work”. He added: “We have to get away from this mindset of dependency. This mindset about ‘what can France do for us?’ France will do whatever it wants to do for its own sake, and when those coincide with ours, ‘tant mieux’ [so much better] as the French people say…Our concern should be what do we need to do in this 21st century to move Africa away from being cap in hand and begging for aid, for charity, for handouts. The African continent, when you look at its resources, should be giving monies to other places…We need to have a mindset that says we can do it…and once we have that mindset we’ll see there’s a liberating factor for ourselves”.

Economically speaking, even a united Europe will not be able to compete with China. This is no longer the century in which African governments were begging for “aid”. Africans have realised that slavery can come in the guise of help.

Liberation from France is already on the cards It will be hard for Juncker to flatter the African governments now and this perhaps – if we are optimistic – will bring about fairer agreements between Africa and Europe. But the question remains as to whether Africa is ready to liberate itself from Chinese money and to negotiate with both as an equal.