Man in the Mirror: Echoes of Jomo in Uhuru 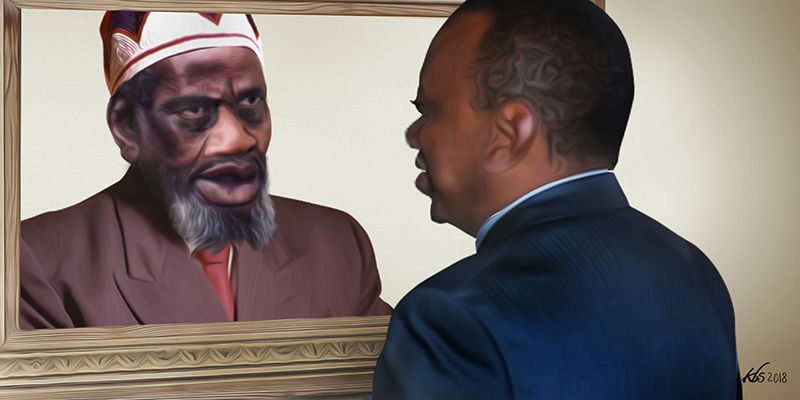 Uhuru Kenyatta, the son of the founding president, Jomo Kenyatta, is now in his second and final term as President of the Republic of Kenya. He was first elected in 2013 in a hotly-contested presidential election in which he eked out a narrow victory that saw him escape a run-off between himself and his closest competitor, Raila Amolo Odinga. A critical look at Uhuru’s presidency and the manner in which he ascended to the top seat reveals some uncanny echoes from the experience of his father Jomo, which constitute three important dialectical lessons in our understanding of the essence of social change and development.

First, prior to assuming the presidency, Jomo, along with five others – Paul Ngei, Achieng Oneko, Kung’u Karumba, Fred Kubai, and Bildad Kaggia – was imprisoned in Kapenguria by the colonialists for seven years for allegedly masterminding and leading the Mau Mau war of independence. This group has since come to be known in the annals of Kenya’s political history as “The Kapenguria Six”. On his part, prior to assuming the presidency, Uhuru, along with five others – William Ruto, Francis Muthaura, Ali Hassan, Henry Kosgey, and Joshua Sang – was indicted by the International Criminal Court (ICC), then headed by the Chief Prosecutor, Luis Moreno Ocampo, for allegedly masterminding and funding the 2008 post-election violence in Kenya. This group was named “The Ocampo Six”.

Second, Jomo and his Vice President, Jaramogi Oginga Odinga, found common ground in advancing the cause of decolonisation. Indeed, Jaramogi was the first to politically rehabilitate Jomo by refusing to form a government while the latter was still in prison after KANU won the internal self-government elections of 1961. He argued for “Uhuru na Kenyatta” (Freedom with Kenyatta). The two, Jomo and Jaramogi, fell out over issues of ideology and national policy within the first few years of independence. On their part, Uhuru and his deputy Ruto began with falling out – they were on opposite sides when the 2008 post-election violence erupted – but found common ground once they were indicted by the ICC and partnered to save themselves by acquiring political power. Furthermore, whereas Jomo and Jaramogi were self-made icons of the nationalist struggle for independence, Uhuru and Ruto were protegés of President Daniel Toroitich arap Moi; created, perhaps, in the latter’s image and likeness.

Jomo and his Vice President, Jaramogi Oginga Odinga, found common ground in advancing the cause of decolonisation. Indeed, Jaramogi was the first to politically rehabilitate Jomo by refusing to form a government while the latter was still in prison after KANU won the internal self-government elections of 1961.

Third, as president, Jomo seemed to have demonstrated greater fidelity to rule of law than Uhuru. Jomo had parliament pass an Act to allow him to pardon election offenders. This was for purposes of pardoning his friend, Paul Ngei, who was found to have committed election offences in the 1974 elections, which rendered him ineligible to contest in the subsequent by-election. The new law ensured that Ngei contested and won his seat back. Uhuru demonstrates less fidelity to the rule of law. In the face of the Supreme Court decision to nullify the August 2017 presidential election, Uhuru referred to the judges as “wakora” (thugs) who had no powers to change the “will of the people” and vowed to “revisit” their case after the repeat election. Indeed, the drastic slashing of the judiciary budget and the arraignment of Deputy Chief Justice Philomena Mwilu on corruption charges in August 2018 may be interpreted as actualization of the “revisit” threat.

Fourth, Jomo had a penchant for using obscene language against the opposition and those he did not see eye to eye with. Similarly, Uhuru has taken to using obscene and abusive language against his opponents and those he doesn’t agree with. This was particularly evident on his triumphant return from The Hague after his case was dropped when he was addressing community members in Turkana in early 2017 where he lashed out against the local County Governor, Josphat Nanok.

Fifth, at the end of Jomo’s tenure, critics noted the disintegration of the nationalist coalition that fought for independence and the inauguration of an imperial presidency. Similarly, at the end of his first term in office, critics noted Uhuru’s tendency toward authoritarianism. Civil society was being referred to as “evil society”. There were attacks on the offices of the African Centre for Open Governance (Africog) and attempted deregistration of the Kenya Human Rights Commission, ostensibly on account of their perceived support for the political opposition following the contested results of the August 2017 presidential elections.

At the end of Jomo’s tenure, critics noted the disintegration of the nationalist coalition that fought for independence and the inauguration of an imperial presidency. Similarly, at the end of his first term in office, critics noted Uhuru’s tendency toward authoritarianism.

Sixth and finally, when he eternally left the political scene through death in August 1978, Jomo left a vibrant and growing economy, albeit one characterised by one of the highest income inequalities in the world, perhaps only exceeded by Brazil and South Africa. It was an economy described by Tanzania’s Julius Nyerere as a “man-eat-man society.” At the end of his first term in office, on the other hand, Uhuru’s legacy is one of an economy literally mortgaged to China because of his government’s penchant for borrowing from the latter to finance over-priced grand projects whose single-sourcing is tied to Chinese suppliers and Chinese labour.

From these six observations of similarities and differences between the old Jomo and his younger son Uhuru, we can glean three lessons based on the three laws of the dialectical method. The first dialectical law is the law of the unity and conflict of opposites. This states that the world, both social and physical, is a paradoxical terrain characterised by a unity of contradictions, a unity of opposites. For instance, in mathematics, we have the integral and the differential (plus and minus); in chemistry, we have fusion and fission (combination and dissociation) of atoms; in mechanics, we have action and reaction; in physics, we have positive and negative electricity by which we boil water and freeze it.

Similarly, in the social world, we have the haves and have-nots; the rulers and the ruled; buying and selling; in war, there is advance and retreat, victory and defeat. Even the Bible says in Galatians Chapter 6 that the human being is a bundle of contradictions – the soul is always warring against the flesh and vice versa. To fully understand phenomena, therefore, we must seek out their internal contradictions. Note the contradictions in the Uhuru vs. Ruto saga: sworn enemies on opposite sides in the post-election violence in 2008 and bosom friends in the aftermath of their ICC indictment. Note the opposite in the Jomo vs. Jaramogi saga: intimate comrades in the nationalist struggle and sworn enemies a couple of years after independence, which resulted in the house arrest of the latter in 1969.

The second dialectical law is the law of the passage of quantitative changes into qualitative changes. For instance, loss of one hair does not make one bald. But continuous loss of hair culminates in a qualitative change called baldness. At the social level, change, development, or progress is not unidirectional and unilinear, nor does it occur gradually in a smooth straight line. Sometimes one step forward is followed by two steps backwards and vice versa. Note the convoluted and messy decades-long process of democratisation in Kenya that eventually led to the promulgation of a new constitution in 2010.

Indeed, even when nothing seems to be happening, small quantitative changes are usually taking place that add up eventually to a major qualitative change. Note here the seismic ruling of the Supreme Court of Kenya that nullified the August 2017 presidential election. This was preceded by periodic changes in the personnel of the Supreme Court: the retirement of Chief Justice Willy Mutunga brought in Chief Justice David Maraga; the dismissal of Deputy Chief Justice Nancy Barasa brought in Kalpana Rawal whose retirement brought in Philomena Mwilu; the retirement of Phillip Tunoi brought in Isaac Lenaola. It is hardly to be expected that without these little quantitative changes (not to mention the protracted changes that led to the new constitution that provided for a Supreme Court), the celebrated landmark ruling nullifying the presidential election, the first in Africa, would have occurred.

The third and final dialectical law is the law of the negation of the negation. This obtains in the repetition at higher levels of certain features and properties of the lower level and the apparent return of past features. For instance, when a grain of barley is put in fertile soil, it germinates into a plant. The original grain is negated. The plant grows, flowers, and produces even more and better grains, which are harvested and processed in the making of beer – the negation is thereby also negated!

Indeed, even when nothing seems to be happening, small quantitative changes are usually taking place that add up eventually to a major qualitative change. Note here the seismic ruling of the Supreme Court of Kenya that nullified the August 2017 presidential election.

Similarly, social development is a constant struggle between form and content and content and form, resulting in the eventual shattering of the old form and the transformation of the content. Like in the grain of barley case, this is a spiral process where the movement comes back to the position it started but at a higher level. Note the earlier referenced tendency on the part of President Uhuru to authoritarianism raising fears of a return to the old KANU days – the denigration of civil society, the attack on Africog, the harassment of Maina Kiai at the airport, the threats to the Supreme Court justices, the deportation to Canada of Miguna Miguna, etc. Nevertheless, we may have spiraled back to some features of the past authoritarian order but we are at a higher level given the political and social changes that have taken place – it can never be the kind of authoritarianism of the single-party era.

The foregoing discussion amply illustrates the fact that socio-political change and progress is achieved incrementally through a series of contradictions. In instances where the previous developmental stage is negated, the negation does not imply it is wholly replaced. The new stage does not completely wipe out its predecessor stage. This reality is captured in the popular adage, “the more things change, the more they remain the same”.

Which brings us to the final consideration. As noted at the beginning, Jaramogi Oginga Odinga facilitated Jomo Kenyatta’s ascendancy to the presidency by refusing to form a government while Jomo remained in prison. Although Jomo made Jaramogi his vice president, they soon fell out and Jaramogi never succeeded Jomo. Similarly, William Ruto facilitated Uhuru Kenyatta’s ascendancy to the presidency by teaming up with him and mobilising the Rift Valley electorate to vote for Uhuru. In so doing, Ruto became deputy president. Will he, unlike Jaramogi, succeed the man he helped propel to power? Political developments following the celebrated “handshake” between Raila and Uhuru indicate that it is highly unlikely that Ruto will succeed Uhuru to the presidency come 2022. The mantra to the effect that kingmakers never become kings themselves seem to be well and alive in the Kenyan political dispensation.