WHY THE SILENCE? African intergovernmental institutions must do more to support those fighting Togo’s repressive regime 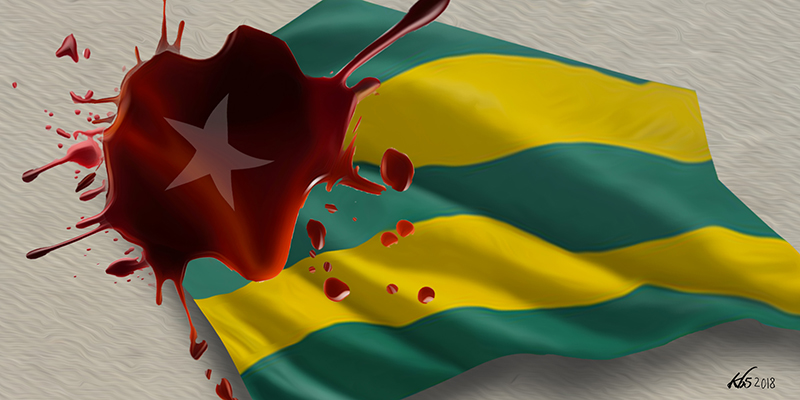 Since 1967, the Togolese Republic has been under the rule of a military dictatorship that has maintained itself in power through brutally suppressing the population. Those who dared to speak out against the regime in Togo have been imprisoned, tortured, and killed. This was the state of affairs in the country under Gnassingbé Eyadéma who seized power in 1967 and remained in power until his death in 2005. When he died, the military decided to install his son, Faure Gnassingbé, as president of the country, a move which violated Togo’s constitution. Faure Gnassingbé has been the president of Togo ever since and he has continued his father’s brutal and inhumane policies. Under his rule, Togo has remained one of the poorest and most miserable countries in the world.

The Togolese people began protesting on August 19 of last year in response to five decades of abuse and misrule. The regime responded to the protests with its usual show of violent force. This has included sending security forces to beat protesters, sometimes even beating them to death. The security forces have also opened fire on protesters, killing several of them. Others have been imprisoned and tortured. The human rights situation in Togo has been deplorable and what makes the situation even worse is the lack of international support or recognition that the people in Togo have received for their struggle.

The current political crisis in Togo, in many ways, highlights the importance of African unity, both regionally as well as on a continent-wide basis. Political crises, such as the one taking place in Togo, tend to impact other nations within the region. For example, hundreds of Togolese refugees have made their way to Ghana to flee from the repression. There was also an incident last year in which Togolese protesters were arrested in Ghana for staging a protest against the dictatorship in their country. The protest was deemed to be a breach of the public order act by the Ghanaian authorities.

The potential regional impact of Togo’s situation was an issue that President Muhammadu Buhari of Nigeria raised when he discussed the need for the opposition and the government to dialogue with each other. African leaders cannot afford to ignore a political crisis that is taking place in a neighbouring country because that crisis could have consequences for their own countries as well. One of the worst examples of this was the manner in which the violence of the 1994 Rwandan genocide spilled into the Democratic Republic of Congo, igniting a war which resulted in the government of the DRC being overthrown and millions of people being killed. To this day, DRC has not recovered from the instability caused by that war.

Similarly, Togo’s crisis has produced a large number of refugees who have fled to neighbouring countries. However, the crisis in Togo has not been receiving the attention it deserves due to the fact that the regime in Togo is regionally recognised as the legitimate government, which has made it difficult for the protesters to receive the type of support that they need. The government of Togo has been free to engage in various human rights abuses, including sending soldiers to brutalise and kill unarmed protesters, without any serious condemnation or pressure from neighbouring countries or from intergovernmental institutions.

Togo’s crisis has produced a large number of refugees who have fled to neighbouring countries. However, the crisis in Togo has not been receiving the attention it deserves due to the fact that the regime in Togo is regionally recognised as the legitimate government, which has made it difficult for the protesters to receive the type of support that they need.

The Togolese people have been demanding an end to being ruled by the same family for fifty-one years and regional leaders have responded to this situation by opting to coordinate a dialogue between the Togolese government and the opposition, rather than engaging in actions that would really pressure the Togolese government to cease brutalising its people, such as placing sanctions on the Togolese government or even threatening Togo’s status as a member state of organisations such as the African Union (AU) or the Economic Community of West African States (ECOWAS).

We know from past examples that there is a precedent for ECOWAS intervening to resolve political problems in member states. ECOWAS intervened in the Gambia when Yahya Jammeh refused to concede defeat after he lost the elections in 2016. ECOWAS has also issued sanctions on Guinea-Bissau in response to the political crisis there. Togo itself is also an example of ECOWAS’ willingness to put pressure on member states. When the military installed Faure Gnassingbé as president, ECOWAS responded by placing sanctions on Togo in an attempt to pressurise the government of Togo into holding elections. When elections were held, more than 1,000 Togolese citizens were killed. Since then ECOWAS has largely tolerated the regime in Togo, in spite of the human rights abuses that President Gnassingbé’s government has carried out. To make matters worse, Faure Gnassingbé is currently serving as the chairperson of ECOWAS, which is a position that was also held by his father when he was president.

Since its inception, ECOWAS has not been as effective as it needs to be in upholding democracy and human rights among its member states, which is demonstrated by the number of dictators that have chaired ECOWAS since it was founded. Likewise, the AU also suffers from the same problem of not doing enough to put pressure on repressive regimes or to even support African citizens who rise up against them.

The demand for change that we are seeing in Togo is becoming commonplace throughout Africa. There were protests in Burkina Faso in 2014 that brought an end to twenty-seven years of dictatorship there. The election that ousted Jammeh in the Gambia was preceded by protests, and earlier this year Hailemariam Desalegn stepped down as the prime minister of Ethiopia due to the protests in his country. There have also been protests in countries such as Cameroon, Kenya, the Democratic Republic of Congo, and Niger. Across the continent, it is becoming apparent that Africans are no longer willing to tolerate the type of corruption and authoritarianism that has plagued the continent for decades.

The demand for change that we are seeing in Togo is becoming commonplace throughout Africa. There were protests in Burkina Faso in 2014 that brought an end to twenty-seven years of dictatorship there. The election that ousted Jammeh in the Gambia was preceded by protests, and earlier this year Hailemariam Desalegn stepped down as the prime minister of Ethiopia due to the protests in his country.

The trend around the continent is that the people are rising up and forcing change. Burkina Faso, the Gambia, and Ethiopia have demonstrated that this tactic can produce change, but this is not an easy process. We also see in Togo, Cameroon, Congo, and other countries that some regimes are so desperate to hold onto power that they will not hesitate to send the military to brutalise and kill their own citizens. It is instances like this in which intergovernmental institutions, such as ECOWAS and the AU, must intervene on behalf of the civilian population. There are non-governmental Pan-African organisations, such as Africans Rising, which are responding to the political developments on the African continent by showing support and solidarity to activists around the continent fighting to effect change, but institutions such as ECOWAS and the AU must do more to support these developments as well.

One of the problems with the Organisation of African Unity, the forerunner to the AU, was that it did not do enough to uphold free and democratic institutions in Africa. In a 1997 speech titled “Africa: The Third Liberation”, Julius Nyerere pointed out that one of the principles upon which the OAU was based was non-interference in the internal affairs of member states. The Tanzanian leader explained: “We protected one another, whatever we did to our own peoples in our respective countries. To condemn a Mobutu, or Idi Amin or a Bokassa was taboo! It would be regarded as interference in the internal affairs of a fellow African State!”

This policy of non-inference meant tolerating military coups, human rights abuses, and dictatorships – all in the name of African unity and solidarity. The AU has demonstrated some of the same faults in that it has been more tolerant of dictatorial regimes than it should be. For example, elections were supposed to be held in the DRC in 2016, but Joseph Kabila has delayed them in order to remain in power. Neither the delay nor the violent crackdown on protests has moved the AU to condemn Kabila. The AU has also remained silent about the abuses that President Pierre Nkurunziza of Burundi has been perpetrating against his citizens. There is also the fact that the current chairperson of the AU is Paul Kagame, who is the president of a country where opposition leaders are regularly harassed and imprisoned. Kagame has also faced allegations of supporting rebel groups in the DRC.

One of the reasons why the regime in Togo has lasted as long as it has is because it receives international support not only from Western countries, such as France and the United States – both of which have a history of backing African dictators – but also because of the lack of pressure from neighbouring countries and the lack of pressure from intergovernmental institutions in Africa. When the Togolese government decided to open fire on unarmed protesters, there should have been a wave of denouncements and calls for sanctions on the part of other African governments, but they remain silent about the abuses in Togo as they remain silent about abuses elsewhere in the continent.

One of the reasons why the regime in Togo has lasted as long as it has is because it receives international support not only from Western countries, such as France and the United States—both of which have a history of backing African dictators—but also because of the lack of pressure from neighbouring countries and the lack of pressure from intergovernmental institutions in Africa.

The recent execution of two women and their children in Cameroon has drawn little reaction from African leaders, some of whom were willing to go to France to march in 2015 following the Charlie Hebdo shooting. As Africa struggles to overcome the challenge of poor leadership that has hindered the continent’s development for many decades now, it is necessary to develop institutions that will promote a type of African unity that will assist in this process. Unfortunately, at the present moment, most of the institutions that are meant to foster unity in Africa also help to maintain the poor leadership that is hindering the continent’s progress.