POACHING: The link between money laundering and organised wildlife crime 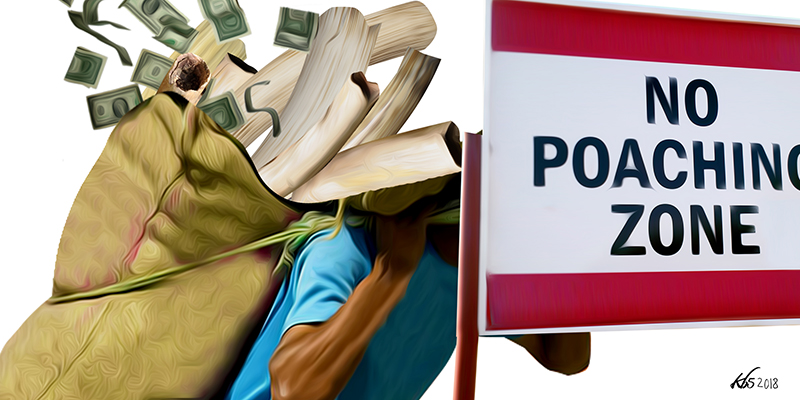 In late February this year, eight individuals were charged in Tanzania with the horrific murder of Wayne Lotter, an anti-poaching investigator who was killed in August last year. The targeted execution of the renowned conservationist and founder of the PAMS Foundation exposed just how far poaching networks can go to protect their criminal trade – estimated to be the fourth most lucrative form of transnational crime globally. His murder also likely reflected the success of his organisation’s investigations and its partnership with the Tanzanian serious crimes investigation unit.

Over the past four years, the serious crimes investigative unit had arrested nearly 900 poachers and ivory traders in Tanzania, leading to more than 240 successful prosecutions and several long prison sentences. When the UK hosts the fourth illegal wildlife trade conference in October this year, other countries can learn from Tanzania’s political leadership, inter-agency cooperation and use of financial tools in tackling poaching and other forms of criminal wildlife trade.

While Africa may be the frontline in the fight against ivory poaching, what lies behind the images of slain elephants is a sophisticated, international network of criminals whose leaders all too often operate with impunity. Anti-money laundering deterrence measures and financial investigation techniques need to be prioritised in order to trace the money and topple the ivory kingpins that continue to threaten rare and precious wildlife.

The tools needed to do that are similar to tackling other forms of organised crime, be it drugs, human trafficking or other mafia-style enterprises. Tracing the money helps identify accomplices of those who are caught red-handed, together with their ringleaders. It can identify laundered assets and property, track the movement of individuals, link suspects to criminality and play a critical role in successful convictions.

While Africa may be the frontline in the fight against ivory poaching, what lies behind the images of slain elephants is a sophisticated, international network of criminals whose leaders all too often operate with impunity.

The trade in illegal wildlife products is driven by profit; some estimates put the price of rhino horn by weight to be higher than cocaine or gold. Demand in consumer markets, particularly in China, needs to be addressed but simultaneously we must fundamentally change the cost-benefit equation for criminal leaders and drive them out of business.

As well as raising the cost of killing and shipping ivory, for instance, authorities can increase the risks of depositing, moving, storing and spending the resulting criminal profits. The scale of the trade in illegal wildlife is such that criminals rely on formal financial systems to launder their money – through banks, money exchanges or mobile-based transfers. This makes them vulnerable to deterrence, regulation and detection.

There are three strategies the governments and law enforcement agencies can employ to deter would-be poachers who want to launder their money. These are the foundations of our European Union-funded programme to help ten East African countries to prevent money laundering and terrorist funding.

First, we must better understand the specific methods and channels used by poachers and launderers and tighten up loopholes. That may mean financial investigators working closely with emerging mobile money transfer systems, which are known to facilitate cash flow at the lower end of the poaching trade. Some of this is about day-to-day work spotting suspicious money transfers and verifying customer identities.

Second, it is about increasing the threat of being caught, convicted and financially punished. Often it is only the lower level poachers and traders that are convicted in Africa but when ivory smuggling leader Feisal Mohammed was jailed for 20 years in 2016, following cooperation between Tanzanian and Kenyan authorities, it sent shock waves throughout the poaching world. We are seeing this sort of cross-border leadership and persistence growing in East Africa but more needs to be done.

Third, authorities can increase the costs of being caught as well as its likelihood. Forfeiture of assets is key to ensuring crime does not pay. While most East African countries have instituted stiffer penalties for both poaching and money laundering, asset seizure is rare. As well as putting the criminals under pressure, the money systems on which they depend can be held responsible. Kenya’s three private banks that were fined, albeit in small amounts, for not reporting suspicious transactions after $7.7 million was embezzled from Kenya’s National Youth Service incentivises the financial sector to tighten its checks.

Often it is only the lower level poachers and traders that are convicted in Africa but when ivory smuggling leader Feisal Mohammed was jailed for 20 years in 2016, following cooperation between Tanzanian and Kenyan authorities, it sent shock waves throughout the poaching world.

Too often in East Africa the interception of an ivory shipment and capture of low-level poachers is the end rather than the beginning of an investigation. The successful case against Feisal Mohammed, which involved mobile phone data as evidence, shows the role that companies can play in identifying its customers as criminals even when they are far from the site of a slain rhino.

The criminal wildlife trade and ivory trafficking, in particular, can cross over with other transnational organised crime. For instance, the Akasha brothers, who were extradited from Kenya and charged in the United States with being ringleaders of a major heroin smuggling network, were also linked to 30 tons of ivory seizures. That case, which involved extensive undercover operations by US investigators, shows that financial investigators need to be well-resourced and led. Some East African countries’ financial investigation units are too small and under-resourced for the scale of the criminal economy they are mandated to uncover. Nevertheless, there are opportunities for having a greater impact if investigators join forces across borders.

Some investigators have limited authority to extract confidential data from financial institutions, or lack the knowledge about to exercise their powers. In particular, investigators in Africa often fail to treat wildlife crime as a serious, organised crime, which hampers its investigation and disruption.

The former British Prime Minister, Gordon Brown, compared financial information and forensic accounting to the impact fingerprints and DNA samples have on criminal investigations. In the lead-up to this year’s London conference on wildlife crime, there is an opportunity to focus attention on using these tools with greater effect to disrupt a global problem.

Money laundering and related organised crime, such as wildlife crime, is by its very nature impossible to accurately quantify. Recent estimates have put the economy of money laundering at between 2% and 5% of global GDP, or in the trillions of US dollars. Concentrated in certain sectors in some countries, money laundering can undermine investments, jobs and economic growth.

Money laundering and related organised crime, such as wildlife crime, is by its very nature impossible to accurately quantify. Recent estimates have put the economy of money laundering at between 2% and 5% of global GDP, or in the trillions of US dollars.

In poaching, the damage to people and animals and the scale of profits involved are all too visible. The sight of bloody carcasses of elephants and heaps of seized ivory reflects the cost to African wildlife and how the sale of too many countries’ national treasures continues to profit just a few.