The Burden of Memory in a Borderless World 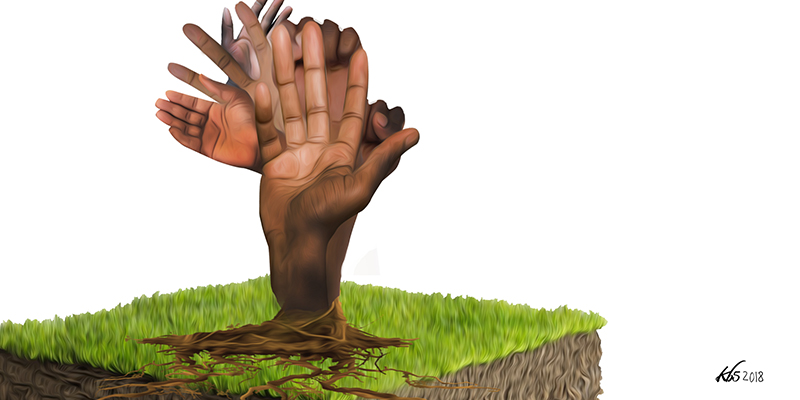 After a twenty-five year absence, I returned to Somalia in the summer of 2016. I didn’t go back to the cosmopolitan city of Mogadishu where I grew up (now perceived as one of the world’s most dangerous cities) but to the federal state of Puntland, where I had been officially invited to attend the Garowe Book Fair. The Garowe Book Fair is one of three literary festivals that take place in Somalia; the others are held in Hargeisa and Mogadishu.

In the weeks prior to my impending return, I was racked with doubts and faced complex dilemmas. My return provoked in me an irritating feeling of inadequacy. Was I ready to go back to a place I didn’t really know, to come to terms with Somalia being even more splintered now nearly 60 years after independence?

The days leading up to my departure saw me frantically scouring the shopping streets in Moleenbek, Brussels, where I live, in an (aborted) attempt to buy clothes suited for the occasion. My return to Somalia triggered a series of questions, questions that Somalis in the diaspora often grapple with. Was it really necessary to “disguise” myself to go back? Couldn’t I just get off the plane decently dressed, like one did before, instead of being fully veiled?

Despite my enthusiasm, I couldn’t help wondering about the significance of going to Puntland, where I had not once set foot during my 18 years of living in Somalia. I prepared myself to take stock of the country’s fragmentation that had occurred in a mere quarter century – a fragmentation that flies in the face of the unifying vision of Pan-Africanism.

My return to Somalia triggered a series of questions, questions that Somalis in the diaspora often grapple with. Was it really necessary to “disguise” myself to go back? Couldn’t I just get off the plane decently dressed, like one did before, instead of being fully veiled?

Pan-Africanism emerged as a movement seeking to unite the continent over and beyond myopic particularisms and national criteria while respecting the cultural traditions of the black populations. Today a new African humanism is needed. Africa continues to be viewed through the external eyes of others who cast the continent as permanently inferior. Africans need to look at themselves differently, through the lens of their own thought processes.

Europe relates to Africa in fundamentally quantitative terms, and this must be overcome. Human life includes facets that cannot be measured by economic performance indicators, facets such as the social, cultural, ecological and environmental spheres.

As illustrated by Edward Said, the colonial enterprise was not just driven by military and economic mechanisms, but was founded on a complex cognitive construct with accompanying violence that was as epistemic as it was physical. The anti-colonial struggle was both material and mental warfare. Put differently, the resistance to colonialism and the ineluctable corollary of nationalism were, in truth, forced to play out according to terms defined by the West. Consequently, one can deduce that the independence of African nations did not signal an end to European penetration of the African mind.

My own country serves as an example. At its foundation on July 1, 1960, the Somali territory was home to only a part of its nationals, unlike the majority of African nations, in whose territories were to be found varying ethnic and linguistic groups who were indigenous to those territories. Indeed, the borders mapped out by foreign powers led to the splitting of what is known as ‘Greater Somalia’ into five parts: Djibouti, the Ogaden in Ethiopia, the North Eastern District of Kenya, Somaliland and southern Somalia (with only the latter two reunited at independence).

Broadly speaking, the nationalist project sought not only to win for Somalia a place alongside other modern nations, but also nourished the aim of establishing a distinct Somali national identity: a shared identity, drawing on the past to pave the way to a modern future. Given the limited level of literacy among the population at large, the theme of national identity was driven principally via theatre and popular songs.

Both prior and subsequent to independence, there were numerous theatrical plays supporting the causes of nationalism and Pan-Somalism. Pan-Somalism had long been relatively significant throughout the land and, ironically, this significance led to Somalia being isolated from the Pan-African movements in the newly-born neighbouring nations.

Broadly speaking, the nationalist project sought not only to win for Somalia a place alongside other modern nations, but also nourished the aim of establishing a distinct Somali national identity

Nevertheless, Cabdullahi Qarshi, the famed singer-songwriter and oud-player, could not be stopped from naming a song after the Congolese leader Patrice Lumumba, and penned the following lyrics after his assassination:

Lumumba is neither dead nor alive/
Don’t believe either of them/
It’s only his presence that has come to be lacking/
Don’t believe that he is absent.

The Company frequently toured the continent, and even the obligatory national military service led to encounters spilling beyond the country’s borders. The singer ‘Faaduma Ali ‘Nakruumah’ told me during an interview that she had earned her nickname during her time spent at the military training centre in Xalane. One of the instructors at the centre was so impressed with Faaduma’s brilliant prowess that he told her that if she were to carry on like that, she would become as important as Kwame Nkrumah, the president of Ghana (where he had just been) and a key player in the emergence of Pan-Africanism. Her friends soon took to making fun of her, suggesting that the real reason the instructor had put her at par with Nkrumah was, in fact, her very dark skin. A day later, when the instructor called her Nkrumah in front of all the other young women, who broke into laughter, Faaduma burst into tears. In due course, Nkrumah became her theatrical nickname too.

Examples of plays supporting Pan-Somalism included the 1954 production Cartan iyo Ceebla (Artan and Ebla) by Xuseyn Aw Faarax and Cali Sugulle’s 1963 piece, Indhasaracaad (Help). In both plays the protagonists are personifications of Somali territory, of African nations and of the European nations involved. The latter focuses on the insurrection of the Somalis in the North Eastern District of Kenya shortly after independence.

The federal state of Puntland was founded in 1998, after a civil war that ran for seven years. The violence that was inflicted on civilians in the name of clan membership played havoc with the distribution of the populace throughout Somali territory. Garowe oozes with stories of people fleeing Mogadishu to find shelter in their “ancestral” land. But can somewhere you’ve never been before be considered your home?

One of my objectives during my time in Puntland was to accumulate and recount tales of the civil war. This was not in order to perpetuate the trauma, but to facilitate reconciliation. According to Achille Mbembe, the South African Truth and Reconciliation Commission taught the whole world a crucial lesson by showing the importance of casting off the conditions of victimhood in order to reclaim a more human dialogue and create a new society. In contemporary South Africa, memory is undoubtedly seen in terms of a painful past, but a past which is heavy with potential for a future of hope. The past is a starting point for the forging of a different future based on the precondition of recognising the suffering inflicted on victims as part of the pursuit of truth and forgiveness. Similarly, Rwanda has shown just how closely memory, history, truth and reconciliation are bound up together.

Garowe oozes with stories of people fleeing Mogadishu to find shelter in their “ancestral” land. But can somewhere you’ve never been before be considered your home?

A victim of slavery and then of colonialism, our continent has repeatedly had to face the moral burden of memory and the weight of the wrongs and violence that were perpetrated. Today, it is even more urgent that the impasse be overcome, that religious dogma and the concomitant cultural, economic and political colonialism, in new clothes, do not come to dominate our mentality.

During our conversations, the Algerian writer and playwright, Hajar Bali, was at pains to stress that both French and Arabic were local, yet not necessarily autochthonous languages in her country. As the Martinican writer, philosopher and literary critic Édouard Glissant makes clear, identity is not an immutable entity, but continually takes shape spontaneously during interactions with others. A tried and tested model is often more alluring than lengthy research with an uncertain outcome. Nevertheless, no future is possible unless Africans start to address the evolution of the present by and for themselves. We can longer continue limiting our existence to the reflection of others’ dreams.

From its outset, Pan-Africanism posited the existence of a bond of common solidarity and a shared identity held by Africans and blacks in the diaspora. The existence of this bond would not appear to have been borne out considering the history of the last century. In the words of Felwine Sarr, the economist, philosopher and writer, we are in the throes of a profound relational crisis. We no longer conceive of social relations as a fertile, sacred space for reciprocal enrichment. Relationships have become the locus of unpitying efforts to remove, lump together and overrun; they have become the archetypal locus of exploitation. The creation of a truly human society is the biggest challenge facing our time.

Today Africa is more than ever connected to the rest of the world. Our era of digital communication technology is a time of robust connections between people, heralding major opportunities for interaction and empathy. All the same, many individuals living in our continent have no guarantee of peace, safety or the conditions for a decent existence. Our times are troubled by manifold crises, both economic and environmental, ranging from nationalism and violent religious extremism to increased social inequality, along with dehumanising structural conditions.

We no longer conceive of social relations as a fertile, sacred space for reciprocal enrichment. Relationships have become the locus of unpitying efforts to remove, lump together and overrun; they have become the archetypal locus of exploitation. The creation of a truly human society is the biggest challenge facing our time.

The African continent is, however, blessed with an incredible opportunity in that it has not entirely swallowed the rationalistic and mechanistic European model, which never ceases to consider development in teleological terms, as though every nation should be following the self-same steps, adhering to an established order or sequence.

Culture, in its artistic, literary, musical and scientific manifestations, proves to be a fundamental resource, capable of sounding the breadth and depth of reality. The main art form is that of living together, constructing a space where society takes shape and provides its own definition of a sense of community.

Starting with the day-to-day behaviour inherent in social relations and physical labour, it is human instinct to establish a body of moral codes and ethical interactions within a community. Is it possible to throw off the spectre of the nation, to be local in order to consider the world as one?

To further quote Glissant, the one who guards the border is without imagination, given that crossing the border suggests a richer imagination of the future and for the humanity to come. Those who cross borders, be they geographical, symbolic, moral or material, encounter a great deal of suffering, but the future is theirs for the taking.