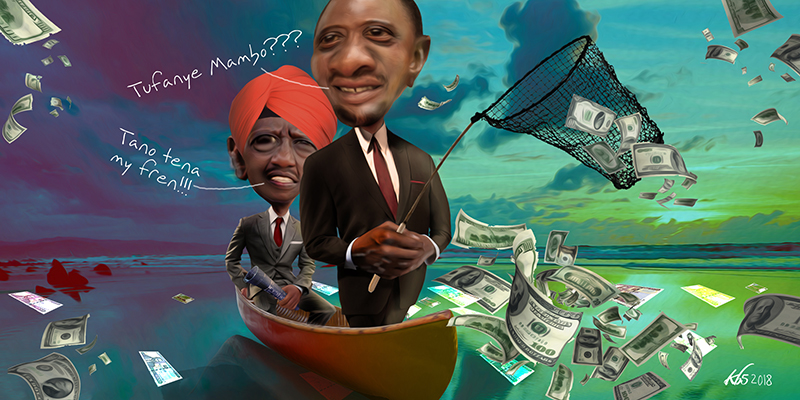 As President Daniel arap Moi’s rule came to an end, demonstrations of public exhaustion with his long stupefying tenure started to manifest more and more starkly on the ground. Fear of the old man melted away with his authority. One incident in the run-up to the 2002 election saw ordinary wananchi stone his motorcade in Western Province. This had been almost unthinkable before but it was clear that the Moi era had already ended in the minds of many Kenyans. During the inauguration of Mwai Kibaki in 2003, part of the gathered throng marred the occasion by pelting the retired president’s car with mud and stones. Uhuru Kenyatta and William Ruto are managing similar sentiments in huge swathes of Kenya. The opposition are working hard to galvanise and take exploit the same sentiments.

The International Criminal Court (ICC) was the organising principle of the Jubilee regime until 2015. It united Uhuru and Ruto, who were both indicted by the court, and also radicalised their supporters, forcing a corresponding radicalisation in the opposition. This obsession with the ICC meant that all visions, manifestos, policies and projects were designed to manage the ICC and the international community. As Kenyatta enters his final term, all these have been tamed by a combination of crafty manipulation and the bearing down of wider security and geopolitical realities that lend Kenya leverage in this age where the low Chinese governance bar predominates.

The International Criminal Court (ICC) was the organising principle of the Jubilee regime until 2015. It united Uhuru and Ruto, who were both indicted by the court, and also radicalised their supporters, forcing a corresponding radicalisation in the opposition.

However, while Jubilee was diverting national attention towards the ICC, it was also going on a stealing spree. Abuse of office and conflict of interest allowed politicians, bureaucrats and their families and friends to accumulate as much wealth from public coffers as possible. This has been carried out with an energy not witnessed since the colonial era when everything that wasn’t nailed down could be grabbed – legally. Implementing policy in accordance to the constitution came third, after managing the ICC and theft, in the regime’s list of priorities.

The powerful spin machine marshaled for the ICC and the broader international project were brought to bear on domestic politics as the regime launched all manner of expensive and dud initiatives to much fanfare – distracting many from the ongoing killing and the stealing. The president made excellent speeches, his ministers cut many ribbons, and the papers were filled with adverts celebrating the launch of a myriad of ‘new’ things.

By 2016, the ICC had been properly vanquished and the international community had been distracted and brought to heel where local matters were concerned. The era of spin – President and Deputy President at photo ops in matching ties making pronouncements in halls decked out as if for a wedding ceremony – had lost its novelty. On social media – to which this presidency has taken the unprecedented step of locating a digital propaganda unit within State House – Kenyans On Twitter (KOT) had taken to parodying and attacking almost every official position articulated. Even the once much vaunted bots of the Statehouse machine and their international advisors had lost traction within the country. Social media, a space that the Jubilee machine once expertly owned, had by the last election turned organically hostile. The carefully crafted narratives demonising the opposition and its leaders were not shifting perceptions on the ground – only hardening already existing political positions.

Social media, a space that the Jubilee machine once expertly owned, had by the last election turned organically hostile. The carefully crafted narratives demonising the opposition and its leaders were not shifting perceptions on the ground – only hardening already existing political positions.

When a population tires of a regime, even simple things acquire an unusual complexity; seemingly straightforward issues become contested. The rational is consumed by irrationality as people turn to prayers, prophets, the stars, witchdoctors and all manner of hocus pocus to make sense of increasingly complex dysfunction. Late last year even the regime’s dishing out of national honours was controversial Jamhuri Day in December itself was virtually boycotted by wananchi who have always historically turned up in large numbers for the entertainment offered.

Of even greater national import, attempts to launch a new education system and curriculum this month similarly fell flat despite the attempts at spin. And as this fiasco in the education sector is ongoing, Public healthcare is in a similar mess except in bright spots such as Makueni County.

A brazen attempt by the energy ministry and Kenya Power and Lighting Company to grab Ksh.8 billion from Kenyans ran into headwinds as well. Meanwhile, attempts to jump into the international market with another controversial sovereign bond later this month are likely to be met with ignominy too. Two weeks ago the President pulled the hapless National Transport Safety Authority (NTSA) off Kenyan roads after a series of kneejerk policy responses to Kenya’s dangerous roads. So Jubilee’s Tano Tena will be a rough ride – and that’s before factoring in the emboldened opposition’s assortment of political plans over the coming months.

With its legitimacy undermined by flawed polls, the Jubilee administration’s ability to spin its way out of promises made, blunders walked into and theft-induced policy conundrums has been severely weakened.

Jomo Kenyatta, Daniel arap Moi and Mwai Kibaki and their handlers made the most expensive political blunders as they tried to manage or stall real political transition. Kibaki’s bloody-minded determination to hang on to power almost led to civil war following the rigged election in 2007. Kenyatta and Ruto are putting on a brave face even as media reports suggest divisions between them. Without the glue of the ICC holding them together, it is hard to predict whether the wheels are coming off the UhuRuto bus. For whereas the ICC once brought singular focus, theft remains a healthy galvanising preoccupation. It causes many internal contradictions, however, which explains why the oft repeated quiet whisper by the President’s supporters that: “All the stealing is being done by Deputy President William Ruto and his people”, doesn’t have the resonance it had in 2014.

With its legitimacy undermined by flawed polls, the Jubilee administration’s ability to spin its way out of promises made, blunders walked into and theft-induced policy conundrums has been severely weakened. Indeed, the era of blaming Ruto for all things that disappear – from people to money – has ended and instead a giant gravitational black hole into which Kenyan lives and public resources disappear has settled firmly around both the president and his deputy. Theft has become the organising principle of the regime even as the politics of the Kenyatta transition kicks in.