To make our roads safer, we need to make them feel less safe 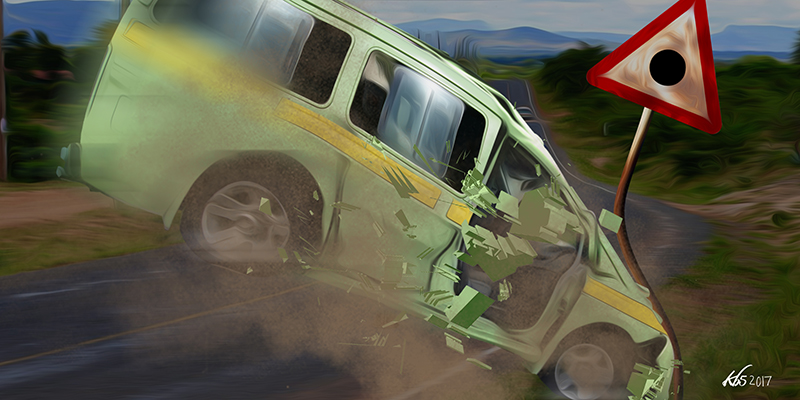 “There are no signs beyond this point. You are on your own.”

The stretch of road from Homa Bay to Mbita and Rusinga Island is probably the best road I’ve seen in Kenya. Not only is it properly marked, it has clear signage, reflectors and proper distances between rumble strips and bumps. It weaves down a scenic view if you are heading to Rusinga, and for about 40 minutes, you feel like you are cruising on a piece of heaven.
Yet there are makeshift bumps in at least three towns midway. This happens a lot in rural areas because of high pedestrian casualties on roads that cut through urban centers.

Is the problem regulation, design, or people?

In its entire lifetime, the Salgaa stretch on the Nakuru-Eldoret road has been one of the most dangerous roads to drive on. It is a smooth straight downhill stretch, which then curves towards Sanchang’wan, and beyond. Thousands of lives have been lost on it, with the tallies each year running into the hundreds. Salgaa itself is quiet, and muddy. It is a transit town so it is full of brothels and bars, often offering the same pleasures. One theory offers that it has so much carnage because the deities are angry. There are multiple theories of brake failures and other mechanical problems because it seems truck drivers tend to lose control as they descend. That was how the Sanchang’wan fire disaster began, with an oil truck losing control and leaking fuel. Design-wise, the Salgaa stretch is clearly marked and has sufficient signage. Bumps didn’t help, and attempts to regulate how trucks approach that downhill stretch have done nothing to stop multiple car crashes. People keep dying.

Is the problem regulation, design, or people?

Our solutions from the last century of our highway code don’t seem to be working. We are big on collective punishment and punitive measures, increasing fines and deregistering driving schools and saccos. Once in a while we will haul traffic officers before judges on corruption charges. But road accidents keep happening because we have forgotten the most important safety aspect on the road: people.

Our traffic statistics show that more than 80 percent of accidents happen because of “driver error”. It is a reductive phrase that tries to bundle the entirety of human psychology into the simplicity of right and wrong. It also helps traffic engineers and regulators to sleep at night knowing that they have done their part with safety features, believing that if drivers obey the rules, then everyone should be safe. This could not be further from the truth.

There is a behavioural concept called risk compensation that explains one of several reasons why engineering interventions don’t work at black spots. We tend to adjust how we behave to how safe we feel; the more protected we are, the more risks we are willing to take. It is how human beings are wired. The solution then for reducing risky behaviour on the roads is to make people feel less safe, both individually and collectively.

The result of safety interventions on roads so far has been that they have separated us from each other. They lie to us that as long as we follow the rules, we will be fine. We forget that old driving school advice: “Assume everyone else on the road is crazy.” It’s simple: the road is a shared space, and should be designed as one.

We tend to adjust how we behave to how safe we feel; the more protected we are, the more risks we are willing to take.

The idea of roads as shared spaces emerged from the radical ideas of Dutch traffic engineer Hans Monderman who argued that less regulation makes roads safer, not the other way round. A stringent regulatory mechanism requires an extensive implementing force, which becomes the symbol of those regulations, and in their absence (and sometimes presence), a license to break or stretch them. A good example here is speed guns – we only watch our speed when we know, or suspect, that National Transport and Safety Authority (NTSA) officials are lurking somewhere in the bushes or there is a road block up ahead.

Since cars took over roads from pedestrians, traffic engineers have approached more regulation as the way to enhance safety. Solutions such as bumps, speed bumps and alcoblow stops are in plenty. Monderman hated this, saying, “Traffic engineers have this boring habit of always trying to resolve traffic issues by adding more of everything. But I feel the better approach is to ask yourself what can be removed.”

In December last year, a fuel truck rammed into eleven cars that had slowed down at a bump near Naivasha. That accident killed 39 people, most of whom might have lived had the bump not been present. But there was an argument for the bump: pedestrians had been dying while crossing the road. Monderman believed that if you regulate the extreme risk-takers in traffic (high speeders, for example), you encourage low risk-takers to aim for that limit. If you are comfortable driving at 80KpH, but the speed limit is 100KpH, you might feel the need to accelerate. It is risk compensation in action. In Traffic: Why do we drive the way we do, Tom Vanderbuilt says “Safety features meant to reduce the consequences of driver error encourage drivers to drive in a way requiring those generous provisions.”

In some of his real-life experiments, Monderman stripped roads of non-essential safety signs and at times even traffic lights. On one road he put a sign saying: “There are no more traffic signs beyond.” It may seem permissive, but it is also a warning. When a road is heavily regulated, we drive mechanically, which is dangerous because we need to be both alert and using our muscles to adapt to the road. To be told that there are no more signs is to be told you are virtually alone. You become more aware of yourself and others, and presence of mind has saved many lives.

If you have never noticed, some of the roads with the least signage and regulation are actually the least dangerous. Take the Mai Mahiu escarpment road, for example, with its extreme drop to the left as you descend, and heavy lorries everywhere. The road is barely marked, and there are few traffic signs, if any. Long stretches of it don’t have a yellow line and you have to subconsciously determine if you are in your lane. Most of the accidents that happen there involve lorries experiencing mechanical failure. This is why there is a thick line of pillars on the side of the small Italian church because lorries rolling down the hill keep using its walls to stop after their brakes fail.

Monderman believed that if you regulate the extreme risk-takers in traffic (high speeders, for example), you encourage low risk-takers to aim for that limit.

But how many of these accidents, on a road with little or no railings, have involved cars flying off into the forest below? Or have resulted in road carnage as serious as that which is witnessed in Ntulele up ahead? Ntulele has a massive concrete railing behind the beaten-up metal one because that wasn’t working, just like the Black Spot signs before and after. Ntulele is a short stretch in an otherwise scenic but uneventful road, while Mai Mahiu feels like you are teetering on the edge of the world. One wrong move and you fly off into oblivion, and this goes on for kilometre upon kilometre. So you stay alert throughout the whole ordeal and watch out for stalled or slow trucks, other drivers, boda bodas and the edge of the road.

The crux of Monderman’s traffic philosophy is that each additional traffic sign, lane marking, roadblock, speed gun and traffic light increasingly detaches us from the fact that roads are shared spaces. Other traffic engineers missed the fact that he wasn’t asking for all safety measures to be stripped; he was calling for a new paradigm to road design that focused on people – one that recognises that more regulation does not mean safer roads, and that people need to constantly remember they are sharing a public utility with other human beings, and sometimes animals.

The crux of Monderman’s traffic philosophy is that each additional traffic sign, lane marking, roadblock, speed gun and traffic light increasingly detaches us from the fact that roads are shared spaces.

This is more applicable, and visible, in urban areas than on high-volume highways. Most of the accidents that occur in downtown Nairobi, despite the high-volume in people and cars, are fender-benders. You can’t drive fast in downtown Nairobi because you are sharing the road with other drivers, pedestrians, mkokotenis and hawkers. The idea of a yellow triangle at junctions was brilliant because it places the responsibility of clearing the junction to each driver, and encourages cooperation. You make eye contact, you use other tools of communication, like the horn and occasionally, the finger. It might not be perfect, but it works. It reminds you that the road is no different from a busy staircase or street, for example, in that everyone occupies some space, and is moving.

One constant question whenever I bring this idea up is “Are we mature enough for that?” Another is, “Had Monderman seen how matatu drivers drive?” My response to the former is yes, but realising that it takes time and a collective social effort, not just one led by regulators. We have to change the way we drive, and while at it demand less corruption so that we have more roadworthy vehicles on the road. The maturity question is an indication of our paternalistic relationship with the state. We expect it to curb our perceived immaturity, even when doing so might end up taking lives and maiming people.

They drive like that because they epitomise another important concept in traffic philosophy: how people drive in a society is related to how corrupt that society is.

To the second question I would say matatu drivers epitomise driving in Kenya. They are our social extreme – the lengths we are willing to go when no one is looking or when we are paying someone to look away. It’s why we coyly wait for matatu drivers to overlap and then follow them, all the while smiling at our ingenuity. They drive like that because they epitomise another important concept in traffic philosophy: how people drive in a society is related to how corrupt that society is.