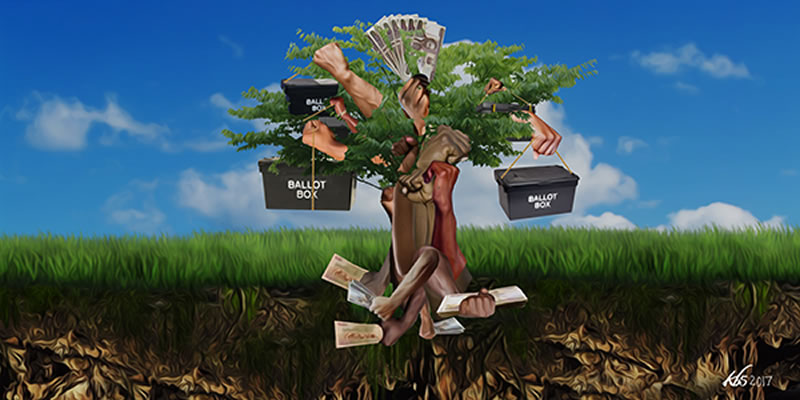 Corruption is Kenya’s favorite political pastime. It is the grease that oils the machinery of the extractive colonial state and an effective stick for the opposition to whack the government with. It generates screaming headlines, dominates talk on the airwaves and in public meeting places across the country. From Chickengate to MAfyaHouse to AngloFleecing to Toa Kitu Kidogo, it has enriched the lexicon of misgovernance even as it has impoverished the people.

So why does it seem that it has been barely mentioned during the 2017 election campaigns? Its absence is in marked contrast to the attention the issue had been receiving in the pre-campaign period but is the continuation of a trend that has seen the issue relegated to the electoral back-burner despite its salience in the five years in-between elections. It is a trend that took root at the end of the Nyayo era and can be discerned in the last three election cycles.

The 2002 elections, which finally brought the curtain down on the 24-year kleptocratic dictatorship of Daniel Arap Moi, were the last to be fought on a largely anti-graft platform. The Mwai Kibaki administration was inaugurated largely based on the promise of uprooting the vice. At that time, it was clear who the bad guys were. Or at least, a little clearer than it is today. Sure, Kibaki and many of the career politicians who made up the National Rainbow Coalition had at one time or the other been in bed with Moi. Kibaki himself had been Moi’s loyal Vice President for more than half of his tenure, and the rest, like Raila Odinga, who dissolved his National Democratic Party to join KANU in 2002, had either been part of Moi’s government or had eaten his ugali at one time or another and had consequently sung his song.

The Mwai Kibaki administration was inaugurated largely based on the promise of uprooting the vice. At that time, it was clear who the bad guys were. Or at least, a little clearer than it is today.

Still, in the popular imagination, Moi was the personification of everything that was wrong with Kenya and corruption was at the top of the list. In comparison to him, the others were veritable knights in shining armor, riding to rescue Kenyans from the dragon’s fiery keep.

It was only after Moi left the scene that the smell of sulfur lingered and Kenyans begun to cotton on to the truth. Within 3 years, the NARC government had been engulfed in a slew of corruption scandals, was condemned at home and abroad by former international allies for “eat[ing] like gluttons” and “vomit[ing] all over our shoes”. John Githongo, Kibaki’s anti-graft czar (and current Publisher of The Elephant), would be forced to flee for his life into exile in the UK from where he would make Anglo Leasing and “ngo srowry” a staple of political discussions back home.

Following the splits within NARC, which became a full divorce after he successfully campaigned for the rejection of a new constitution in the 2005 referendum, Raila and his allies were booted out of government, which left the Kibaki side holding the corruption baby. Thus, underneath the vicious, tribalised rhetoric employed by both sides during the 2007 campaign, the narrative of corruption was present, though not in as stark a frame as in 2003.

The dispute and violence that followed that election led to the formation a Government of National Unity which wasted no time getting down to the business of stealing from the people. The very first meeting of the Grand Coalition Cabinet hatched the plan for what would become the 2009 maize scandal -basically a maize subsidy scheme that, in the words of Pricewaterhouse Coopers audit report, “was from the outset designed to fail and to provide a means for considerable financial exploitation at the expense of the state.”

With 40 Ministers and 52 Assistant Ministers, drawn from nearly every significant political party in the land, the GCC was Kenya’s largest ever and encompassed nearly half of the country’s 222 MPs. One consequence of this was that by the time the 2013 election rolled around, responsibility for graft had been still further diffused among the political elite and all were pretty much equally implicated in the vice. As George Orwell writes in Animal Farm, “The creatures outside looked from pig to man, and from man to pig, and from pig to man again; but already it was impossible to say which was which.”

In any case, another issue -also a legacy of the 2008 violence- had forced itself onto the agenda. The December 2010 indictments of 6 Kenyans at the International Criminal Court, and the confirmation of charges against Uhuru Kenyatta, William Ruto and journalist, Joshua Sang, profoundly shook up the Kenyan political scene and was the glue that cemented the Jubilee Coalition. The issues of whether the two should have even been permitted to run for office in the first place, and how they would govern while battling the charges at The Hague (perhaps via Skype, as Raila helpfully suggested) took centre stage.

Just as in 2005, the people left in government would shoulder pretty much all of the blame for the all-too-predictable corrupt feeding frenzy that would follow.

The situation changed somewhat following Kenyatta’s inauguration. The 2013 elections were the first to be held under the 2010 constitution, which prevented candidates running for multiple offices. So when Raila and Kalonzo failed, that meant they were out, not just of government, but of Parliament as well. Which also means that, just as in 2005, the people left in government would shoulder pretty much all of the blame for the all-too-predictable corrupt feeding frenzy that would follow. As the President himself famously declared while addressing Raila at the funeral of William ole Ntimama last year, “endeleeni kumeza mate lakini nyama tutakula (you keep salivating as we eat meat)”.

Of course, Raila himself wasted no time painting the Kenyatta administration as the most corrupt in Kenya’s history. This effort was greatly assisted by a massive slew of corruption scandals that seemed to follow every major project the Jubilee government undertook, from revamping the National Youth Service to building the Standard Gauge Railway, from the Eurobond issue to the Youth and Women’s Funds.

Many of the more sensational allegations appeared to whirl around the Deputy President, whom Raila quickly branded the High Priest of Corruption. The scale and brazenness of the thieving and tenderpreneuring, the unwillingness and even inability of the administration to do anything to stem it, was a big reason why Odinga was able to effectively erase Kenyatta’s lead in the polls over the last year. But now that he has caught up, why does he not appear to press the advantage?

Well, once the campaigns started, the spotlight was not just on Jubilee, but on Raila’s NASA as well. And unlike Moi in 2002, Uhuru, despite his best efforts, has not been in power so long that his corruption essentially blinds us to that of his rivals. The NASA principals, especially Moses Wetangula, came with scandals of their own and corruption was effectively taken of the table when NASA was revealed to have been funded by Jimmy Wanjigi, one of the premier tenderpreneurs of our time. But not before the coalition had scored a spectacular own goal with the release of two manifestos, one decrying easily abused, Jubilee-type megaprojects and the other detailing a number of just such projects. Further, party spokesmen seemed completely flummoxed by the question of how a NASA government would deal with corruption in its own ranks beyond enforcing the existing law on conflicts of interest and hoping that its members adhere to a pre-election code of conduct.

But, for a long time, Kenyans have understood that “political will” to be a preserve of the elite who control government, rather than stemming from the people.

With the Supreme Court annulling the presidential election and ordering a fresh one, which is now slated for October 17, there appears to be little inclination within NASA to once again introduce what should be their trump-card. With a month to go to the poll, it is somewhat disheartening that the entire body politic is so implicated in graft that the issue barely gets a mention in electoral campaigns, despite being the most important cause of Kenyan immiseration. Ironically, though, it does also present the glimmers of an opportunity, one Kenyans would be wise to grab.

That at this very moment, when political pressure especially around election time could bear most fruit, political realities conspired to extinguish it is an opportunity for all Kenyans to take a step back and to understand that there is no one riding to their rescue. There are no knights in shining armor. It really is up to the people to deal with this.

The struggle against graft in the late 1980s and 1990s, led by the churches and civil society groups, correctly identified reform of the state itself as critical to success and so incorporated the need for a new constitution. Yet since we handed the fight over to the politicians in 2003, we have kept going round in circles. The 2010 constitution required a conflagration that almost rent the country apart in order to become a reality. And it has tellingly had little impact on overall corruption rates.

The 2010 constitution required a conflagration that almost rent the country apart in order to become a reality. And it has tellingly had little impact on overall corruption rates.

Kenyans will need to understand that the constitution will not reform the state so long as they do not demand it. And we have been here before. At Independence, we introduced a new constitution to reform the colonial state. According to “Amending the Constitution -Learning from History”, a paper presented by our current Attorney-General, Dr. Githu Muigai, at an International Commission of Jurists conference in 1992, “The colonial order had been one monolithic edifice of power that did not rely on any set of rules for legitimization. When the Independence constitution was put into place it was completely at variance with the authoritarian administrative structures that were still kept in place by the entire corpus of public law. Part of the initial amendments therefore involved an attempt – albeit misguided – to harmonise the operations of a democratic constitution with an undemocratic and authoritarian administrative structure. Unhappily instead of the latter being amended to fit the former, the former was altered to fit the latter with the result that the constitution was effectively downgraded.”

The “authoritarian administrative structures” that held up “the mononolithic edifice of [colonial] power” were what made up the colonial state, and they endure to this day. But the Supreme Court’s annulment of the presidential election has shown that the constitution can have real teeth, if only it is allowed to work. However, if it is not to go the way of its 1962 counterpart, Kenyans must firmly stand behind it. It is their political will that matters. And it is most encouraging to know that one’s destiny is in one’s hands. Kenyans must become the masters of their own fate and not leave that to the captains of ethnic ships.