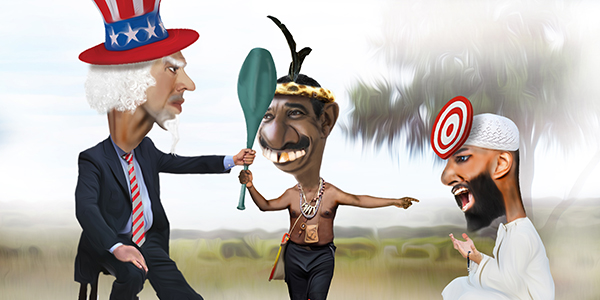 Kampala, Uganda – AN ASYMMETRICAL CONFLICT WITH A SHAPE-SHIFTING ENEMY

There were two historic junctures at which the journey to the current ever-globalising quagmire of the ‘war on terror’ could have been headed off.

I say ‘globalising’ because what began as a promise of a quick war to depose the Bin Laden-friendly Taliban regime in Afghanistan in 2001 has metamorphosed into the world’s last superpower and friends locked into an asymmetrical conflict with a shape-shifting enemy franchise in a series of theatres stretching from West Africa, though all the Middle East, down the eastern seaboard of Africa well past the Horn, and arcing back up into Central Asia (Afghanistan, the “Stans” to the southeast of Russia, and Pakistan, and even on the fringes of China).

I say ‘quagmire,’ because clearly, there is no end in sight to these overlapping conflicts. This is not my assessment, but that of various generals the United States has had in charge of the various theatres.

It all started in one place: Palestine, which moved on to become a pan-Arab concern, and then a pan-Muslim one, broadening out to take on other Muslim grievances

At best, they will settle into spheres of permanent low-grade conflict. At worst, they will become conflagrations that consume whole regimes and create ungoverned spaces.

But it all started in one place: Palestine, which moved on to become a pan-Arab concern, and then a pan-Muslim one, broadening out to take on other Muslim grievances.

Beginning with its inheriting of Western European imperial interests in the Middle East after the 1939-1945 War, the US has managed to profoundly insult a very large section of the Muslim world, through its wholly one-sided and highhanded approach to the Israel-Palestine conflict. This has provoked many of them into the dead-end of violent terrorist warfare against anything they think is an American idea, initiative or institution.

Here is the irony: Freedom of religion is a secular principle, not a religious one. That is something that many of us do not realise: That secularism seeks to create tolerance for ways of thinking that are at bottom – and this applies to ALL of the Abrahamic faiths – intolerant by their very nature.

Mainstream politics in the Middle East was secular for a very long time. In fact, it was the defeat of secular politics by Western machinations that eventually made the rise of religious-ideological politics possible. The classic example here is Iran, where the elected government of the very secular politician Mohammed Mossadegh was deposed in 1953 in an American and British-backed coup. The population was subsequently to turn more and more to a theological understanding of how the resultant regimes could be overthrown. Thus Iran, a country with one of the largest secular elites in the Middle East, was taken over by theocrats.

Ironically, Western powers often made use of religion-based politics to advance their interests. The most famous example of this us the United States’ mobilisation of resources to sponsor the resistance that came to be known as the Taliban to the Soviet Union’s occupation of Afghanistan between 1980 and 1988.

The British military freelancer T.E. Lawrence of Arabia, is the one who set Saudi extremism on the road to state power after he exploited its Wahabbism to mobilise Arabs to fight and break up the Ottoman Empire in 1918.

There are more even surprising examples. The Palestinian Islamic militant group Hamas is reported by some experts to have begun life as a religion-based welfare group designed to counter the “communist” mainstream PLO. Israeli intelligence was one of its early supporters.

There is nothing particularly, or inherently religious about terror-tactics as a fighting method.

The Palestinian fighting groups – secular, and often left-wing in orientation, such as the Fateh (PLO), as well as offshoots like the Popular Front for the Liberation of Palestine – virtually invented aeroplane hijacking as a tactic; the (again, Marxist-oriented) Vietnamese military resistance to the United States’ military occupation of their country often used suicide bombers on the battlefield, as did the Tamil Tigers fighting group in Sri Lanka

And the various forms of the Irish Republican Army became known largely for their use of time-bombs concealed in vehicles, buildings and public transport facilities.

Thanks to the near-ubiquity of easily shared media, we now all know what it is to be a civilian during an American-style military assault

The major intellectual pretext for those pushing the ‘terrorist’ label is to point out that the distinction lies in the actual targeting of civilians, or being unconcerned for their safety while carrying out attacks.

However, thanks to the near-ubiquity of easily shared media, we now all know what it is to be a civilian during an American-style military assault. From Iraq (in which at estimated 650,000 civilians were killed) to Yemen to Afghanistan’s Helmand Province, there have been countless civilian deaths as a result of drone strikes alone.

Tragically, apart from the media exposure, there is nothing new in this.

The 1939-1945 war saw the German city of Dresden firebombed from the air, killing about 25,000 people and destroying over six square kilometres of the city centre. The stated purpose was to disrupt economic production and the railway system that helped feed the German war machine, but critics during and after the war insist that the bombing was simply punitive, given that the war had already turned against Germany, that it was aimed at demoralising the population, especially given Dresden’s cultural significance.

Therefore, ideology aside: A bomb is after all, just a bomb. Everything else; who ordered its deployment, how powerful it is, how indiscriminate it is, the method of its delivery to the detonation site is, essentially, just a detail.

But with ideology, the situation becomes even worse. During the 1919-1921 Irish war for Independence, the British Empire formed a regiment by recruiting long-term violent criminals from British jails with the promise that their sentences would be annulled after military service.

British Army officer Frank Kitson made his name by developing a method of creating “pseudo-gangs” out of captured Kenyan guerrillas during the Kenyan war for Independence from Britain, and using them to commit civilian atrocities so as to discredit the Independence movement.

Therefore, to be specific, this is a war not on terrorism as such, but on those specific fighting groups within Arab and Muslim nationalism – seeded by the Palestinian conflict – that sometimes use terrorism as a method of fighting, just as Western powers have done down the years. ‘Terror,’ in this sense, is just a way, or set of ways, of fighting.

Once this distinction between intentions, and methods is made, then potentially, everyone is a terrorist.

For example, many current African regimes stay in power by using the readymade tools of their states to terrorise their domestic populations. This is logical, since the very establishment of those states was the goal and outcome of the Christian jihad waged against the ancestors of those citizens just over a century ago.

The war on terror must be understood in this context, beginning with a new ‘name’ for it. I propose: The war between the United States and global Islamic nationalism, in which America and her allies have seized upon the Islamists’ indiscriminate methods as a propaganda tool.

What has this to do with Africans? If the 1998 bombing of the US embassies in Nairobi and Dar es Salaam is anything to go by, then very little.

The Nairobi attack killed 12 Americans, and over 200 mainly Africans who happened to be in the building at the time. However, the reported reaction of American security, in which armed guards prevented anyone from rescuing clearly visible victims trapped in the rubble, was not much friendlier.

Put bluntly, many an African head of state has worked out that making themselves useful to the USA may help in extending their rule back home

For the African regimes, made up of despots, warlords and a few accidental democrats, this war has presented a unique opportunity.

This is how twos sets of countries that had just been at war with one another (Ethiopia and Eritrea 1998-2000 with over 100,000 killed; and Uganda and Rwanda 2000 inside the DRC, badly damaging Kisangani City) all signed up to the ‘war on terror’ as soon as it was announced by US President George W. Bush just after the 9/11 attacks.

Put bluntly, many an African head of state has worked out that making themselves useful to the USA may help in extending their rule back home. In Uganda, for example, ‘security’ has become the excuse for expanding mass surveillance, formalising a general curtailing of civic rights and media freedoms, the infantilisation of political debate, and the proliferation of a myriad state security formations.

In short, the net result of Africa’s participation in the ‘war on terror’ may be to make African regimes more effective at terrorising the continent’s citizens.