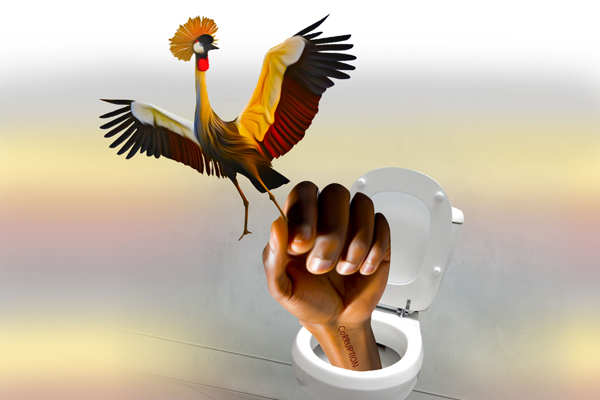 Kampala, Uganda – On November 11, 2016, the Anti-Corruption Division of the High Court in Uganda convicted three former top officials in the Ministry of Public Service who had been found guilty of engaging in syndicate corruption leading to the loss of Ush 88 billion ($25.5million) from government coffers. The scam involved payment of money to ghost pensioners through Cairo Bank in Kampala. This conviction bodes well for President Yoweri Museveni’s current slogan ‘Kisajahakunamchezo’ translated as ‘Tenure of no jokes.’

The conviction has cemented the position of the Anti-Corruption Court in Uganda as the division of court with the highest conviction rate of well over 90% since its establishment in 2008. The court is double-edged – it handles cases of corruption from the public and private sectors.

The rare lucky suspects that managed to survive this court did so only with the intervention of top officials in government, and they have either been ministers or relatives of the First Family. Examples of these can be found around scandals like the Global Fund against Malaria, HIV and Tuberculois or the Katosi Road project.

You would imagine that a specialised anti-corruption court that boats of such a sky-high conviction rate would send a message to officials in public and private offices about how perilous it is to engage in corruption.But no, public officials continue to plan and execute corruption. The vice remains as pervasive as ever.

Recent discoveries indicate that months after she had been appointed, ‘Superwoman’ Allen Kagina wrongly paid a Chinese road construction company Ush21.9 billion ($6.3 million). The company had no formal agreement and engagement with UNRA

The view of anti-corruption activists in Uganda is thatthe system nets and convicts ‘small fish’while the bigger fish swim unfettered. A case in point is the scam in the Office of the Prime Minister over five years ago where syndicated corruption led to loss of more than Ush 60 billion ($17.3 million) meant for the Peace, Recovery and Development Programme (PRDP) for the war-torn northern region and Karamoja sub-region. More than half of that money was donor contributions.

It was a syndicated master act involving the Office of the Prime Minister, the Ministry of Finance and the Bank of Uganda. Donors were incensed andretorted by cancelling aid to Uganda. The damage to the economy and image of the country was colossal. The nation expected to see top echelons in these ministries and agencies taking political responsibility by resigning or the appointing authority wielding the axe.

In the end, it was the same old story. The president absolved the prime minister and permanent secretary of any wrong doing. Only one man, the principal accountant, was convicted while the other architects of the scam were protected.

In April 2015, the famed anti-corruption fighter, Allen Kagina, who had overseen a massive turnaround against the corruption that had ravaged the national tax body, the Uganda Revenue Authority, was appointed to head the Uganda National Roads Authority (UNRA). Kagina arrived as ‘Superwoman’atUNRA, an agency where corruption was a byword. Ms.Kagina had served as Commissioner General for over 10 years.

Ironically, recent discoveries indicate that months after she had been appointed, the ‘Superwoman’ wrongly paid a Chinese road construction company Ush21.9 billion ($6.3million). The company had no formal agreement and engagement with UNRA.The Parliamentary Committee on Commissions on Statutory Authority and State Enterprises in October 2016found out that UNRA paid China Railway No.3 Uganda for the construction of the Nansana- Busunju Road even though the real company doing the job is China Railway No.3 China, with which they signed a contract.

CORRUPTION: THE LIFEBLOOD OF THE SYSTEM

Waking up to a flashing news headlines about a new corruption scandal in government has to many Ugandans become the norm rather than the exception. Transparency International’s Global Corruption Perception Indices and other international yardsticks for measuring corruption have continued to rank Uganda in the league of the most corrupt countries in the world.

Uganda boasts of a comprehensive legal and policy framework to fight corruption. The problem is enforcement.The current regime,whichhas been in place for over 30 years, is thriving througha well-orchestrated patronage system. Corruption is apparently the lifeblood that keeps the system running.

The country has evolved a highly commercialised political culture where money talks, and sometimes shouts. When it shouts the truth it is silenced, sometimes definitely, and the patronage system soldiers on from one year or term to the next.

Election campaigns have been so expensive that credible people have been discouraged from offering themselves for elective positions. In the recent 2015-2016campaigns, the incumbent president outspent his competitors taken together by over 90%.

Financing of parties and election campaigns has ushered in another trend of corruption, manifested in unauthorised use of state resources for partisan political purposes; quid-pro-quo or acceptance of money in return for an unauthorised favour or the promise of a favour after being elected; and vote buying.

A report on campaign spending on the 2016 presidential and parliamentary elections released by Alliance for Finance Monitoring (ACFIM) in May 2016 alludes to the fact that the incumbent president financed his own campaigns. The source of this money remains undeclared. Suspicions are rife that the power of incumbency may have been exploited to encroach on national funds. Over half of the Members of Parliament that stood on the ticket of the ruling NRM party were bankrolled by the president himself. He is also the chief financier of the party.

Parliament has been reduced from an organ of the people’s sovereignty to a rubberstamp of the regime in power. The ruling party boasts of a sweeping majority of about 75% of the MPs in the house. Policy decisions are not decided in parliament but in caucus meetings of the party in power.

These trends show that Uganda is heading towards a patrimonial state;some argue that we are already there. A patrimonial state is a form of governance in which all power flows directly from the leader.

THE BUDGET AS A TOOL OF THE RULING PARTY

But the more explicit challenge is that businesses run by politicians have mastered the art of circumventing the tax systems. Firms that fall in that category are not only being run with funds obtained corruptlybut also under-declare their imports, incomes and profits to evade tax.

Uganda’s economy is consequently in trouble. Business owners tell us that since 2015, daily sales have gone down by almost 30%. Some are unable to meet their monthly loan premiums to the banks. Companies are struggling, some closing and othersabout to. Crane Bank, which two years ago was one of the top four banks in the country, was recently going under until government intervened. Perhaps this is one of the effects of overspending during the election campaigns of 2016.

And now there is an elephant in the room! The national Constitution has a provision that bars a person aged 75 years and abovefrom contesting the presidential elections. The current president is 72 years old and will thus not be able eligible to contest for re-election in 2021. If past experience is anything to go by, it is unlikely that this provision will be respected. Like night follows day, parliament will amend the Constitution to remove the age limits on the presidency. President Musevenihimself says he is not interested in amending the Constitution but word from the corridors of power indicates the contrary.

In a survey of MPs in the 10th Parliament conducted by the Alliance for Finance Monitoring in September and October 2016, the majority of MPs (74%) – including those on NRM ticket–  said theywould oppose any motion to remove the age-limit provision in the Constitution. However, sources sayopportunistic MPs are hoping to profit from this finding. They are setting the price of lifting age limits at Ush200 million ($58,000) for each MP.

These are the salient features of corruption in Uganda, a country where individuals are stronger than institutions. Citizens have sold themselves to politicians through vote buying, rendering themselves incapable of holding elected leaders accountable. The youth have pockets of vibrancy but lack leadership and many of their leaders have been co-opted into the ruling party system.

THE VANISHING ROLE OF CIVIL SOCIETY IN FIGHTING CORRUPTION

President Yoweri Museveni has once again restated his resolve to stamp out corruption, revamping the rhetoric he has dished out over the past three decades. The only difference this time around is that he has gone ahead to code name this five-year term in office as KisanjaHakunaMchezo. It remains to be seen if the so-called big fish will finally answer for the high-level corruption scandals they have been engaged in.

The Inspectorate of Government (IG) – the institution mandated to fight corruption –  has designed a web-based database system (IG ODS) that will enable leaders to declare their income, assets and liabilities online. The Leadership Code Act 2002 enjoins high ranking political and technical officials to make these declarations.The IG expects all officials concerned to use this online system to make declarations by March 2017 or face consequences such as losing their current positions. This ‘innovation’ is funded by DfID’s SUGAR project (Strengthening Uganda’s Anti-Corruption Response).

Declarations made under the Leadership Code Act 2002 are neither displayed for public scrutiny nor verified by the Inspectorate of Government. The IG lacks the wherewithal to verify all the declarations. In my view, this is obviously a non-starter.

The Office of the Auditor General (OAG) continues to conduct value for money audits. Reports are submitted to parliament and the Parliamentary Public Accounts Committee summons the suspects.

The role of civil society in fighting corruption has been minimal lately, with scattered voices here and there. Organisations that used to be vocal seem to have been re-programmed with the software of fear/self-censorship. Citizens at large seem to have given up. Religious institutions are not offering hope either. Many of them have been co-opted into the patronage network through a series of vehicle and cash donations. The media is largely owned by politicians and businessmen who are feeding off the patronage system.

In a nutshell, the country seems to have suddenly entered what I call ‘survival mode.’Curbing corruption in Uganda is still a losing battle.