Deedha: How Pastoralists Communities Are Effectively Managing Drought and Conflict 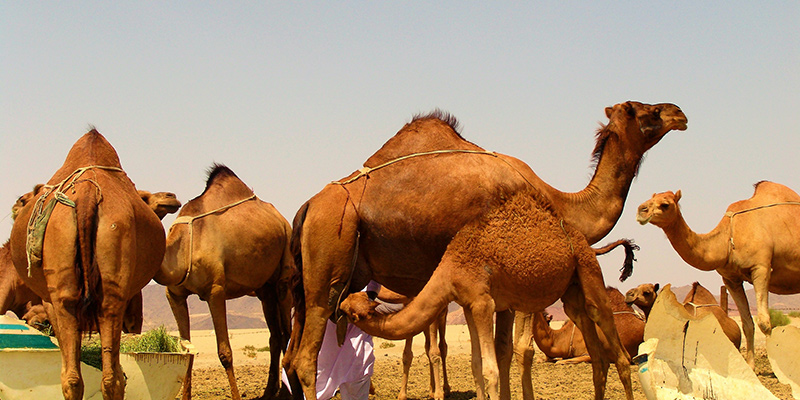 The first known drought in Northern Kenya was about 120 years ago (Wajir 1901, Mandera and Garissa 1902, Tana River 1905, and Isiolo 1927). Since then, 30 major droughts have been recorded in Northern Kenya. While a slow-onset disaster, drought occurrence has reduced to an interval of every 1-2 years in the last two decades.

Despite Africa’s minimal role in global warming, climate risks in Africa are growing bigger and continue to impact negatively rural agriculture and the pastoral economy.

In northern Kenya, drought often results in loss of lives and livelihoods, forcing thousands of households to drop out of pastoralism. Additionally, the Lack of rains undermines the growth of pasture and water availability for both humans and livestock. And as scarcity sets in, the use, control, and access to pasture and water are contested, often leading to risks of violent conflict.

Drought uncertainty triggers an old age survival strategy; – mobility where pastoralists either move to escape drought, conflict, or both. This strategy is incorporated within a traditional resource governance mechanism called Deedha amongst the Borana pastoralists group living in southern Ethiopia and Northern Kenya counties of Isiolo and Marsabit. 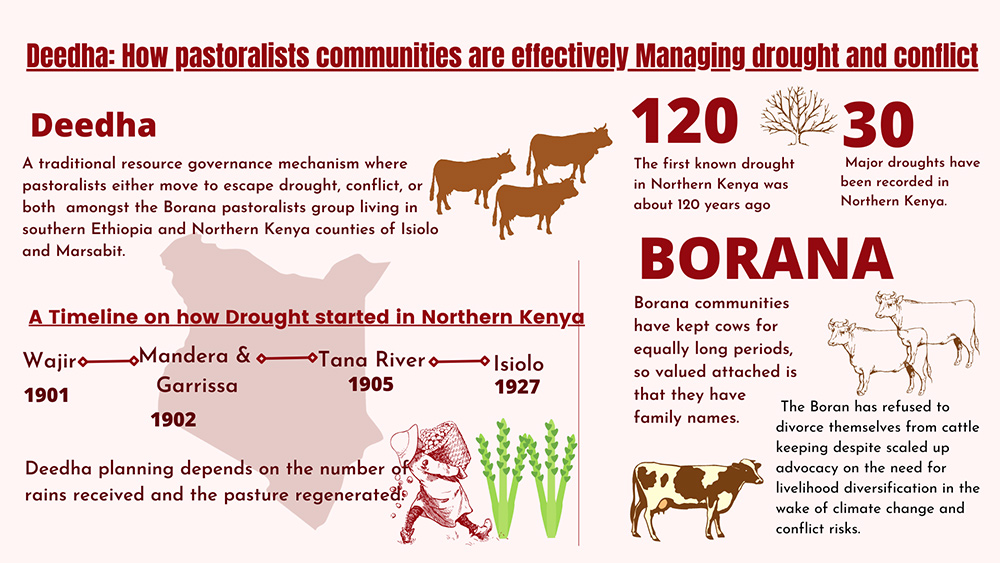 Practiced over a century, the system is elaborate; ‘it considers and plans how pasture and water resource’ is planned to last between seasons. Unique and structured, Deedha planning depends on the number of rains received and the pasture regenerated. So effective is the ‘system’ that the knowledge has supported the rearing of cattle to date despite high vulnerability and weak resilience traits.

For a long time in Kenya, cattle keeping has remained synonymous with the Maasai people. Yet in Kenya’s north and southern Ethiopia, the Borana communities have kept cows for equally long periods, so valued attached is that they have family names.

Various groups, including men, women, and young men, have also composed songs praising the cow’s beauty, walking style, milk yields, and how the herd owner moves around with them in the best of rangelands with constant surveillance against the raiders.

So emotive is any cattle disposal plan that a family meeting must be called, where reasons are evaluated to ascertain whether the sale is justified or not.

Another anecdote is also told of how various species respond to different needs, particularly water where camel would stay for a more extended period, followed by goats and sheep and cow in that order. At the same time, this story avers different resilience traits; the Boran has refused to divorce themselves from cattle keeping despite scaled up advocacy on the need for livelihood diversification in the wake of climate change and conflict risks.

Promotes Sustainable use of rangelands

Founded on the principle of sustainable use of the rangelands, the Deedha system is reciprocal. It encourages sharing resources and providing a safe drought haven for other pastoralist groups from other fragile counties such as Wajir, Garissa, Marsabit, Samburu, and even Laikipia.

The system is designed to encourage mobility over large tracts of land, helping the pastoralists break the pest cycle, aerate the soil (breakdown of soil with hooves), and manage unwanted vegetation.

The institution of Deedha is headed primarily by an elder, with each area having its Deedh (traditional grazing area to a particular group), which is linked to other deedha’s.

Informal but highly effective, the Deedha employs critical rangeland management, where the systems consider rangeland planning based on ecological vulnerabilities, livestock populations, an anticipated influx in determining when and where livestock moves, and whether there is a need for activation of the strategic boreholes.

The system partitions the rangeland into three grazing parts as dry, wet, and drought grazing areas, with also flash floods along the Ewaso Ngiro River considered as a season and blessing due to pasture regeneration in the swampy areas. In managing and protecting the rangelands, the Deedha traditional systems discourage sedentarization in strategic rangeland as part of conservation strategy after the use and boreholes areas, where Genset/pumps are mobilized during drought crises and demobilized on the fall of rain.

The system also incorporates the young people into Deedha resource planning and use and this is for two reasons; undertake pasture and security surveillance (Aburu and shalfa) in the far-flung Deedha’s which borders known or perceived enemy territory.

The system is so unique that critical access planning is done based on anticipated risks and livestock (species) vulnerabilities where Hawich (Milking herd) and non-milking herds (Guess) are split as defined by production and physical traits, respectively.

Hawich (Milking herds) are lactating, and some old and weak female breeds while non-Milking (Gues) are young female and male breeds with the ability to trek long distances searching for pasture and water. The system also calls for the protection of migratory and watering routes. While water for all livestock species is a priority, this customary system prioritized water for livestock in transit and the donkey over other livestock species for its role in household management. The system’s effectiveness has also seen it advocates for the protection of watershed areas and ensuring the cleanliness of the water point environs after all the livestock has been watered. The Deedha also has in place resource sharing plans internally and externally, where Deedha in one location consult another Deedha before any decision is made. Such arrangement is also captured and advocated for by more recent attempts in enhancing resource sharing and ending conflict through such declaration as the Modogashe-Garissa, first entered in 2001 which calls for strengthening of resource governance and sharing framework between communities during drought. Thus, Deedha proactively enhances resilience through resource sharing and a framework for negotiations between communities during drought.

While Isiolo also had its fair share of drought, the use of this highly effective system has cushioned pastoralist group in Isiolo against the drought, only making foray into other communities’ rangeland in 1992 when Isiolo livestock moved to then Moyale District, Kauro in Samburu in 2000 and 2017 again to Moyale. The migration in 2017 was necessitated by fear following conflict escalation between the Borana and Samburu, leading to loss of 7 lives and over 3000 head of cattle in what the local Borana communities cite as security imbalances created by the Northern Rangeland Trust (NRT) to instil fear and force local pastoralists communities to abandon key strategic drought reserve in Chari Rangelands in favour of wildlife conservancies.

Untold, Deedha also calls for the protection of endangered tree species such as Acacia, Anthath and Qalqalch in which users are not allowed to overexploit, with individuals found out on the wrong punished. Equally, the system put communities at the Centre of wildlife conservation as it discourages reckless killing either for food or even trophies. The system also advocates for leaving water in the trough for wildlife to access in areas where the only water sources are deep wells.

Deedha is an example of bottom-up ‘law or rules’ for rangeland management; it addresses environmental and wildlife conservation. Like in predictive climate science, Deedha elders consider planning on how the previous seasons have performed. Further, the elders can predict trends and rain behaviour patterns based on Uchu, who closely work with the institution of elders.

With climate trend likely to worsen, it is crucial now for development partners, Civil Society Organizations (CSOs), and policymakers to rethink climate change adaptation and management in light of pastoralist’s indigenous knowledge and traditional resource governance structure such as Deedha to protect pastoralism which has continued to provide a lifeline to millions of households in the horn of Africa.