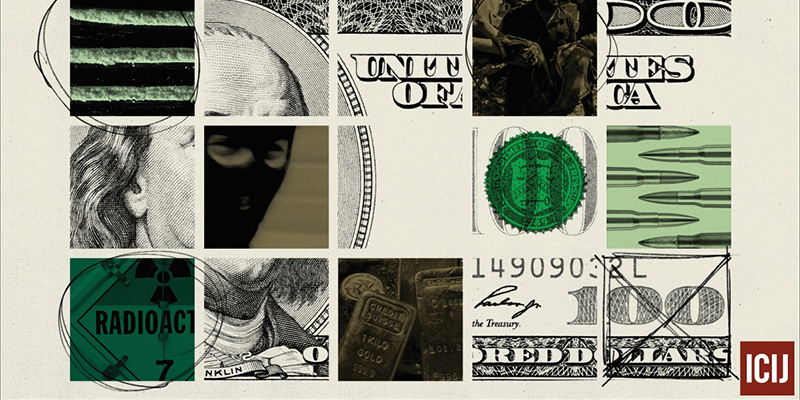 At least 53 Kenyan companies and individuals appear in a leak of banking records submitted to the US Department of Treasury as suspicious financial activity, according to an analysis of leaked bank documents by Africa Uncensored.

The documents, submitted by some of the world’s largest banks to the US Department of Treasury’s Financial Crimes Enforcement Network, also known as FinCEN, were obtained by BuzzFeed News. BuzzFeed News shared the documents with the International Consortium of Investigative Journalists (ICIJ) which coordinated 110 media partners around the world.

The size of the leak, 2,100 suspicious activity reports filed by U.S. banks, or SARs, is unprecedented.  While the documents are not evidence of wrongdoing, they provide a unique, bird’s-eye view of global illicit money flows often obtained through corruption and other crimes. Twenty-four Kenyan financial institutions were named in the reports as either beneficiaries’ banks or banks through which companies and individuals made suspicious payments from countries that include the United Arab Emirates, Nigeria, the United Kingdom, British Virgin Islands and China.

Additional reporting by Africa Uncensored also linked shareholders of Commercial Bank of Africa — now named NCBA Group — which is co-owned by Kenya’s first family, to a company that received millions of US dollars in potentially suspicious payments for coffee and DVD players.

The New York branch of Standard Chartered, which acted as an intermediary bank, flagged payments sent to a company called SMS Ltd which the bank identified as having addresses in Kenya, Afghanistan, Uzbekistan, Russia and Bulgaria.

In the reports, the bank described SMS Ltd as being “in [the] pharmaceutical and medical products” industry. However, the bank noted, the companies sending the payments were in completely different lines of businesses, including commodities trading, vegetable oil production, and coffee exports.

Of the $14 million that SMS Ltd received between 2005 and 2013, $3.3 million was paid by Kenyan entities. More than $2 million of that was from two coffee Kenyan dealers, East African Gourmet Coffees Ltd and Servicoff Ltd. In fact, the companies are connected to each other and share company officers with companies linked to the Kenyatta family.

One of the shareholders of Servicoff Ltd is  Ropat Nominees Ltd, the second-largest shareholder of NCBA Group, co-owned by President Kenyatta’s family via their company Enke Investments Limited.

The two Ropat Nominees’ directors co-own other companies, including one with John Stuart Armitage, who appears in numerous companies owned by Kenya’s first family. The company, Southbrook Holdings, was recently at the centre of a contentious land sale deal involving the president’s mother.

Contacted by journalists, Peter Kimathi Kinyua said that Servicoff Ltd’s payments to SMS Ltd (registered in Kenya as Sustainable Management Services Limited) have been for the purchase of coffee. He declined to comment on the involvement of Ropat Nominees Ltd except to confirm that the company is part of the nominee shareholders.

“We normally deal with SMS – Sustainable Management Services, a coffee marketing agent at Nairobi Coffee Exchange,” said Kibet Torut while denying knowledge of SMS Ltd and the transactions quoted from the suspicious activity report, in an email response.

Kinyua was appointed by President Uhuru Kenyatta as board chairman for Kenya Forest Service in 2018.

Both Kinyua and Kibet Torut denied having any business ties to the president.

According to their website, Servicoff Ltd, has been growing, processing roasting and blending coffee since 1969. The company shares an email domain name with East African Gourmet Coffees Ltd, the other coffee dealer named in the bank’s report.

Import records confirm that Servicoff has been shipping Washed Kenya Arabica AA coffee since 2007, mainly to the U.S.

The bank report also noted that SMS Ltd had received $1.3 million from Louis Dreyfus Commodities Kenya, listed as a commodity broker in the SAR, the local branch of a global trade firm headquartered in Switzerland that deals in the coffee business too. Africa Uncensored has identified that one of the directors behind the Nairobi branch of Louis Dreyfus is Alexander Mareka Dietz, who is also a director in a company with Udi Mareka Gecaga, a one-time brother-in-law to President Kenyatta.

Reporters were unable to reach Dietz, and automated replies to emails sent to the company address indicate that only approved senders are able to email the company.

Company records obtained by Africa Uncensored reveal that Sustainable Management Services (SMS) Limited is wholly owned by East Africa MM Co. LLC, which is registered in the US state of Delaware, a recognised haven for shell companies due to its reputation for corporate secrecy and tax breaks.

On a US coffee seller’s website, SMS Ltd markets Kenya AA coffee that is handpicked by many small-holding farmers in central Kenya.

According to the Kenya Biogas program website, the company is “one of the partners working with coffee farmers through targeted capacity building on climate change through projects.”

A snapshot of their website in 2016 reveals that SMS Ltd is a group company of Ecom Agro-Industrial Corporation Limited, which is registered in Switzerland with the Esteve family its ultimate beneficial owner. Ecom’s website lists an office at Tatu City coffee park in Ruiru, Kenya where SMS Ltd is located, according to its Facebook page. [3] The Esteve family also runs ECOM Coffee, a leading global coffee miller and coffee trader.

However, according to the FinCEN files, of the 201 transactions SMS Ltd received totalling over $14 million, more than half came from a Dubai-based vegetable oils production company for the purchase of television and DVD player.

When asked by journalists to comment on why a Kenyan company with a Delaware-registered shareholder markets coffee from Kenyan farmers to Kenyan companies exporting to the US, Musioma, the Tax Justice Network Africa executive director, had this to say:

“The fact that we are talking of companies being registered in tax havens and coming in, speaks of the lax laws we have when it comes to beneficial ownership. You might find that there is a conflict of interest here emanating from the directors of these companies being the ones that are involved in those transactions”.

Reporters were unable to reach SMS Ltd. Emails to the parent company in Switzerland went unanswered.

Victoria Commercial Bank and Middle East Bank (MEB) Kenya Ltd did not respond to questions concerning these transactions, some of which were processed by the banks.

Standard Chartered Bank, whose New York branch filed the suspicious activity report, did not respond in time for publication.

In another set of transactions in a separate suspicious activity report reviewed by Africa Uncensored, a would-be fashionista named Joyce Oweya Anyumba — a 33-year-old with addresses in Buruburu, Nairobi, and Mombasa — held an account with the Barclays Bank of Kenya from 2015.

Her industry included interior design, curio and African wear, according to Barclays’ report.

However, between July 2015 and October 2016, the account sent and received about 63 wire transfers totalling to $197,094.51. Anyumba received funds from banks in Qatar, the US, Australia, China, Germany and Sweden; she also wired a total of $1234.45 in small payments to individuals in the US, Australia, Canada, Sweden, China and Singapore that the bank could not verify.

The transactions were flagged by the bank because of unidentified sources of funds, unclear economic purposes of the transactions, and potentially being third-party payments.

The justifications for the payments included descriptions such as “bill settlement”, “construction of house” and “consultation fees”, according to the bank’s report.

One sender from Australia made 13 transfers worth almost $12,000 to Anyumba within a year. The payment details included the mysterious notes: “supplier invoice the money better come back” and “supplier invoice make good on your promise no ivor no more bullshit.” The bank noted in its report: “ivor probably meaning ivory.”

Anyumba denied knowledge of these transactions in an email.

“Am sorry sir, I don’t know what you’re talking about,” said Anyumba when we asked her to confirm the above transactions. She did not reply to our follow up emails on her age, address and whether she is in the business of selling clothes and interior design materials.

There is no legal trade in ivory in Kenya, according to Dr Richard Thomas, the head of communications for TRAFFIC, a UK-based wildlife trade monitoring organisation. “It doesn’t come as any surprise to hear you say there’s essentially no record of [the parties]”, Thomas told reporters.

“Wildlife is like any other commodity that’s traded: there’s buyers and sellers and money changes hands. International commercial ivory trade is banned under CITES, but the trafficking of it takes place, run by largely Asia-based organised criminal syndicates. One effective strategy to targeting such networks is through following the money”, said Thomas.

Other senders of money to Anyumba include an American man with a history of shoplifting and bankruptcy, according to the bank’s suspicious activity report.

The account was expected to have an annual turnover of about 16 million Kenya shillings ($160,000), according to Barclays, but the customer received significant transactions whose real economic purposes could not be identified.

“Barclays Kenya has filed a SAR on Anyumba with their local regulator and is in the process of exiting the relationship,” the report noted.

The Kenya branch of Barclays Bank — now known as ABSA Bank Kenya PLC — had not answered our questions regarding the specifics of the transactions by the time of publication.

Musioma listed some general concerns of suspicious trade through Kenya because the country serves as a hub for drug smuggling and illicit trade in all kinds of goods, including ivory and smuggled minerals.

“All these monies are not carried in suitcases or wheelbarrows. The banking sector is at the centre of it. And I don’t think that both the Central Bank and regulators are doing enough to stretch banks in terms of punitive measures,”  said Musioma.

Many of the transactions flagged as suspicious by banks in the FinCEN Files involve recipients and originators from Kenya and other high-risk jurisdictions, including Cyprus, Mauritius, Moldova, Latvia, Afghanistan, Russia and Turkey.

Musioma likened banks to providers of “getaway cars” in crime and corruption in the country — the so-called intermediaries in terms of them providing the oil to enable corruption. “So, the fight against corruption, illicit financial flows and money laundering and all these other crimes can never be won without bringing in the central role banks play”.

Much more could be done to address the role of Kenyan banks in money laundering and other financial crimes, according to Musioma. For example, increasing the punishment for banks who break regulations designed to prevent illicit flows, improve due diligence in the banks’ compliance procedures, and address the issue of the revolving door.“ We have seen people moving in from the banking sector to become regulators and that will create a conflict of interest in the banking industry,” he said.

With Kenya working on being a regional financial centre, through the Nairobi International Finance Centre (NIFC) the regulation and enforcement of the financial sector must be tightened, the tax expert concluded.

Additional reporting by Juliet Atellah, data journalist at The Elephant.

John-Allan Namu, Martha Mendoza of AP and Kira Zalan of OCCRP contributed to this article.