Follow the Money: Is There a Role for Cash Transfers in Climate Change Adaptation? 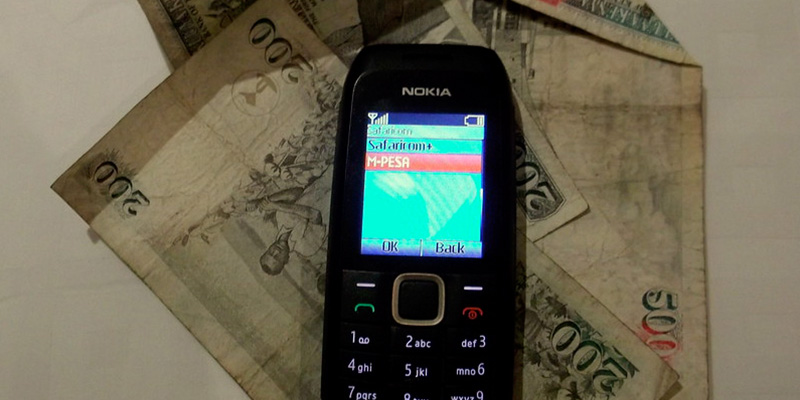 Climate change is significantly affecting everyone but those who are suffering the most are people already in vulnerable situations. In Turkana County – one of the largest counties in the northern part of Kenya – recurring natural disasters, prolonged droughts and excess floods have lead to loss of lives, livelihood and left many people subject to extreme poverty. These harsh climatic challenges have left Turkana residents, a population of 926,976, to not only rely solemnly on frequent supply of relief food but has also disrupted their rich culture and nomadic way of life.

According to a 2015 Human right’s watch report, “climate change has been one of the many factors that contributes to the lack of access to clean water and food to the residents of Turkana. The county’s minimum and maximum air temperatures have increased by 2°C and 3°C, and the rainfall patterns have also changed”, the report adds.

“During prolonged droughts women and children trek for distances in the hot sunny weather in search of the scarce food and water in the dry riverbeds. Families are unable to provide sufficient food and clean water. Most children are malnourished and hunger stricken. Due to competition on grazing lands and water, there is likelihood of an increase in conflict and insecurity,” the report futher states.

A combination with existing political, environmental and economic development challenges in Turkana has had an impact on the Turkana people’s ability to access food, water, health and security.

Hunger Safety Net Programme (HSNP) operates under the Ministry of Devolution and Planning, managed by the National Drought Management Authority (NDMA) a state agency, mandated to exercise overall coordination of all matters relating to drought risk management and to establish mechanisms, either on its own or with stakeholders, that will end drought emergencies in Kenya.

During the HSNP launch in 2008, the people of northern Kenya were gald and ready to embrace the programme as they believed it has the potential to improve the lives of the most vulnerable in Northern Kenya.

The government of Kenya, with the aid of international donors such as UKAid from the DFID (Department for International Development) partnered with FSD Kenya (Financial Sector Deepening), to cash transfer payments to the people of Wajir, Turkana, Marsabit and Mandera.

FSD Kenya was a specialist development programme originally established by the UK government’s Department for International Development (DFID) to provide a continuing mechanism through which donor agencies in Kenya could pool their efforts to support the development of inclusive financial markets. In addition to DFID, it was funded by the Swedish International Development Agency (SIDA), World Bank, Agence Francaise de Development (AFD) and the Gates Foundation. Because of its local expertise and experience in financial service development, FSD Kenya was tasked by DFID to take responsibility for developing a solution to the payments element of HSNP. FSD undertook a long process of market preparation before issuing an open call for tenders to provide payments services. In April 2008, Equity Bank of Kenya was selected by FSD bid panel to provide the payments. 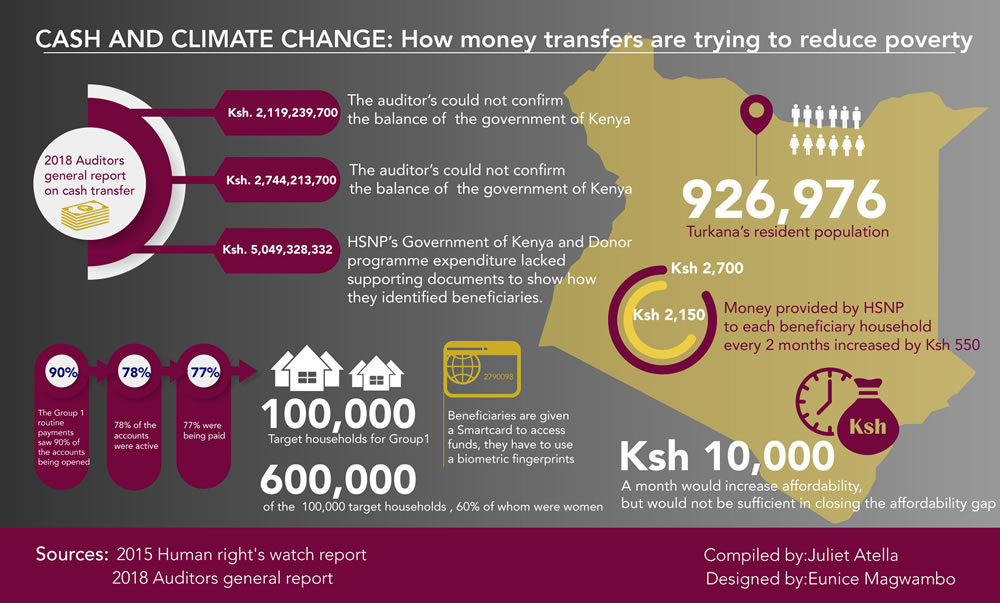 How money transfers are trying to reduce poverty.

The programme has been implemented in two phases. Phase 1, starting with a pilot from 2008-2012, funded by DFID & Australian Department for Foreign Affairs and Trade (DFAT). Phase two (HSNP2) of the programme started in 2013 – 2018, funded by the Governments of Kenya and the United Kingdom with a two-year extension in readiness for the third phase in 2020.

Turkana is one of the counties that benefit from the programme. A total of 137,534 households have been registered out of this, 39,918 are households targeted to receive routine HSNP payments.

“On a particular payroll that contains the name of the beneficiary, identity card, Equity Bank of Kenya account number and the amount, there are instances where funds are co-funded by the Government of Kenya or DFID or both,” opines Peter Thirikwa, the Management Information Systems Specialist under the Hunger Safety Net Programme.

“For the DFID Funds, the money would flow through FSD where NDMA will then direct FSD the amount of money for the particular payroll. FSD would then credit the Equity bank of Kenya which is the service provider that opened the accounts for the beneficiries and then Equity bank would move the funds from the holding account to the individual accounts through the Equity Agents (Dukas),” he further notes.

Every financial year, “NDMA sets a budget for HSNP through the ministry of Devolution and Planning, and the funds will flow from the treasury into an NDMA account sitting at the NIC bank. As an authority, NDMA is regulated to open a bank account where money flows from treasury to the operations account as per the mandate of the authority,” he notes further.

The HSNP originally provided Ksh 2,150 to each beneficiary household (or individual in the case of the social pension) every two months then later to Ksh 2,700 every month. Beneficiaries are given a Smartcard and to access the funds they have to use their biometric information, fingerprints in order to collect cash at any time from a range of pay points mainly small shops called Dukas across the four counties.

However, a team of journalists working with the Elephant visited several villages in Turkana County in November last year and found that though many people said they had been given cards some have never received cash and they didn’t know when to expect them.

The 2018 Auditors general report states that NDMA could not provide bank statements relating to funds transferred to the beneficiaries under HSNP. As a result, the auditor’s could not confirm the balance of Ksh. 2,119,239,700 and Ksh. 2,744,213,700 reflected in the financial statements relating to the government of Kenya and donor funding respectively. 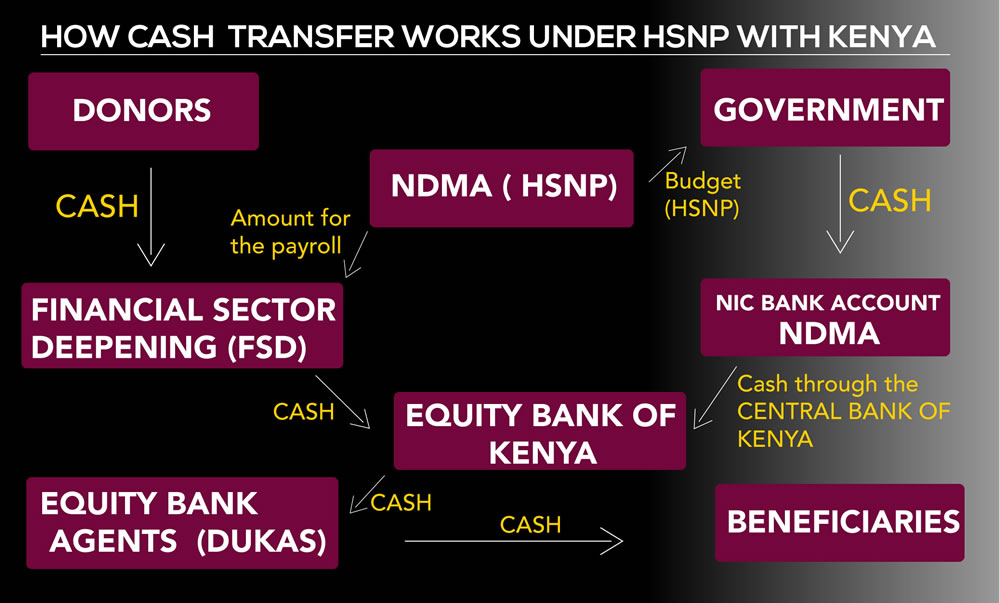 How cash transfer works under HSNP with Kenya

The then Auditor General Edward Ouko told the Elephant that he could only conclude that the funds were unaccounted for as he was only provided with the documentation he referenced in the audit report.

Even if the money were paid on time in every case, that doesn’t mean it’s always adequate for people living in the regions affected by severe droughts, floods, or locusts. According to a 2017 Report on the cost of diet analysis in Turkana county, the current cash transfer of Ksh 2,700 for very poor and poor households is not enough.

“Current cash income and available livestock products are not sufficient for a family to access a nutritious diet. Avenues should be explored to allow households to increase their means to access nutritious foods, such as food for work or vouchers,” the report says.

The report suggests that increasing the cash transfer for these groups to Ksh 10,000 a month would increase affordability, but would not be sufficient in closing the affordability gap. Poor infrastructure in Turkana is a barrier to gaining physical access to the foods, that there is sufficient diversity of foods in the region.

However, the frequency with which these foods are available to households and the quantity with which these can be found in the markets is likely to be an obstacle to achieving a nutritious diet. The report adds that better roads will also allow for more efficient transportation of fresh produce and, possibly, decrease the extent of food degradation and nutrient depletion due to heat and travel conditions.

The cash transfer program is intended to continue running for at least another four years. But while these transfer payments can help those in dire need during environmental shocks or as climate change creates ever harsher conditions, experts and reports argue this is just one small part of a larger need for an effective long-term solution.

This article was developed with support from the Money Trail Project