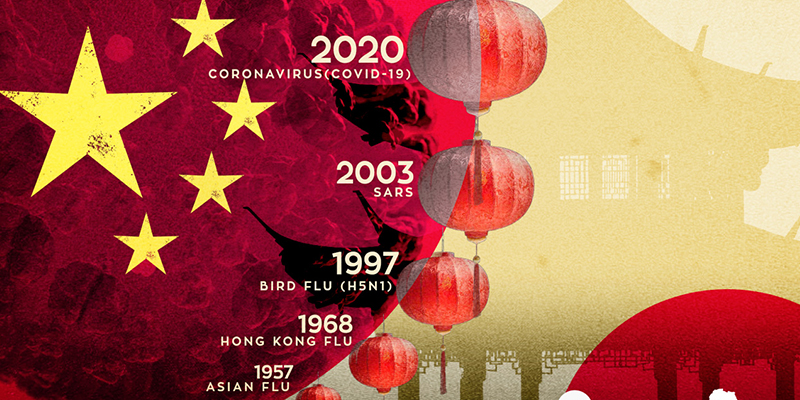 China, officially the Peoples Republic of China (PRC), is a country in East Asia and is the most populous country in the world, with a population of around 1.4 billion people. It is also one of the world’s first civilizations.

With over 34,687 species of animals and plants, China is the third-most biodiverse country in the world after Brazil and Colombia. It is home to at least 551 species of mammals, 1221 species of birds and 424 species of reptiles and 333 species of amphibians; most of which are consumed as food.

On December 31 last year, Chinese authorities alerted the World Health Organization, WHO, of an outbreak of a novel strain of coronavirus causing severe illness. It was subsequently named SARS-CoV-2 and is now known as the causative agent of COVID-19. The origin of the virus was the city of Wuhan in China.

The disease, that has flu-like symptoms, has so far infected over 2 million people and caused over 140,000 deaths across 209 countries around the world. The effects it has left in its trail have caused different countries to take extreme measures in a bid to curb the spread of the virus.

This is, however, not the first time China has been the origin of a viral outbreak. In February 1957, the Asian flu (H2N2) virus emerged in East Asia, triggering a pandemic. It was later traced back to China with a stop in Singapore. It then spread to Hong Kong and to coastal cities in the United States in the summer of 1957.

According to the Centers for Disease Control and Prevention, CDC, the number of deaths caused by the virus stands at 1.1 million people worldwide including 116,000 in the US. A vaccine was developed and the flu tapered off in 1958.

Though the cause is still not known, some authors believe the virus originated from a mutation in wild bucks combining with a pre-existing human strain. The strain later evolved, causing a milder pandemic between 1968-69.

The Asian flu was characterized by symptoms similar to many other strains of influenza, including fever, body aches, chills, cough, weakness, and loss of appetite. It is a respiratory illness, so a dry cough, sore throat, and difficulty breathing are all widely reported among flu sufferers. Other complications include pneumonia, seizures and heart failure.

The Hong Kong flu (H3N2) outbreak occurred in Hong Kong, China, between 1968-1969, killing an estimated 1 million people globally. It is said to have evolved from the H2N2 strain of influenza that had caused the Asian Flu.

It occurred in two waves, and in most places, the second wave caused more deaths that the first. A vaccine was later developed against the virus but it became available only after the pandemic had peaked in many countries.

Infection caused upper respiratory symptoms typical of influenza and produced symptoms of chills, fever and muscle pain and weakness. These symptoms usually persisted for between four and six days.

The H3N2 virus is still in circulation today and is considered to be a strain of seasonal influenza. In the 1990s, a closely related virus was isolated from pigs.

In 1997, human infections with Bird flu (H7N9) were first reported in China. It is a zoonotic disease (one that passes from an animal or insect to a human), which infects humans after exposure to infected poultry or contaminated environments. Rare instances of person-to-person spread were been identified in China.

Since then, annual sporadic infections have been reported outside of Mainland China, Hong Kong and Macao, but all the cases have occurred among people who had travelled to China before becoming ill.

The current risk to the general public’s health posed by the virus is low but exposure to infected poultry pauses the risk of it spreading to neighbouring countries. There have been 6 waves of the epidemic over the years with the last one being in 2017.

In 2002, a viral respiratory disease caused by a coronavirus called Severe Acute Respiratory Syndrome (SARS-CoV), was reported in Asia.  It is thought to be an animal virus from an as-yet-uncertain animal reservoir, perhaps bats, that spread to other animals (civet cats) and first infected humans in the Guangdong province of Southern China.

According to National Foundation for Infectious Diseases, NFID, coronaviruses are a large group of viruses that cause diseases in animals and humans. They often circulate among camels, cats, and bats, and can sometimes evolve and infect people. They are named for the crown-like spikes on their surface.

Human coronaviruses were first identified in the mid-1960s. The CDC states that there are 7 coronaviruses that can infect people.

The SARS epidemic from China affected 26 countries and resulted in over 8000 infections in 2003. Some of the affected areas included Toronto in Canada, Hong Kong Special Administrative Region of China, Chinese Taipei, Singapore and Hanoi in Vietnam.

So Is China Fertile Ground For Future Pandemics?

Given the history above and the current situation the world is experiencing with the COVID-19 pandemic, what does China hold in terms of future outbreaks?

Dr Eddy Okoth Odari, a senior lecturer and researcher of Medical Virology in the Department of Medical Microbiology at the Jomo Kenyatta University of Agriculture and Technology (JKUAT), points out several factors.

“Potential for a pandemic would depend on various socio-economic and geopolitical factors attributed to a country or region. Most pandemics that have emanated from China have been viral in nature and have occurred as a result of such viruses crossing species from animals to humans. Viruses’ crossing from animals to humans is not a strange phenomenon. However, we have to appreciate that most of these viruses, which eventually end up in pandemics, have been traced to the “Wildlife Markets” (wet markets) in Southern China. The activity of trading in wildlife is unique to that region. China being an economic hub where a lot of businesses take place, many people travel to and out of China and therefore I would imagine that any outbreak occurring in China would easily and quickly spread to other regions compared to if such an outbreak would occur for example in an African country.”

In late January, China imposed a ban on trade and consumption of wildlife meat acquired through illegal trading activities, as cases of COVID-19 surged in Wuhan. The city of Shenzen went a step further to extend the ban on cats and dogs. This new law will be enforced on 1st May.

There have been 81,802 cases, 3,333 deaths and 77,279 recoveries since the outbreak (see our tracker for the most up to date numbers), numbers whose veracity continues to be heavily criticized after Chinese authorities reportedly suppressed the news of the outbreak when it first began.

However, for the first time since January, Wuhan reported no new deaths on April 7, joining the rest of China, which has reportedly seen no deaths since March – even though questions have been raised about the veracity of China’s claims. This sharp decline has been attributed to aggressive testing, quarantines and social distancing. Authorities have begun to ease restrictions on lockdowns though still taking precautions to fully resume normalcy in the country.

As to what the future of pandemics holds, Dr Okoth says it is not that easy to tell.

He, however, has a warning for African countries.

“Although so far tropical Africa is not recording very high cases as compared to the temperate regions, seasonal variations may work against us. For example, the cold season starting in June through to the end of July (in the case of Kenya) and other southern African countries may make these regions become the epicentres of infections (if not controlled in time) in the coming months.”

This article was originally published by Africa Uncensored. Graphics by Clement Kumalija.