Nairobi Commuter Train System: In the Shadows of the Lunatic Express 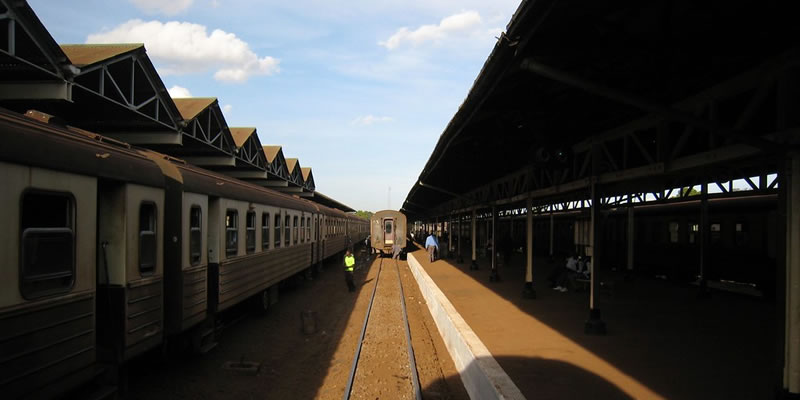 In March 2018, social media in Kenya was awash with images of old rickety Spanish trains that the Kenyan government was allegedly planning to buy at a rough estimate of between Sh71 million and Sh137 million per train to supplement the need for the Nairobi commuter train demand.

According to a media report, the Kenyan government was planning to import at least 11 diesel multiple units (DMU) of trains from Spain, with some as old as 25 years. The Transport Secretary, Esther Koimett, however, refuted the claims while sharing images on Twitter of what she said were the actual DMUs that government is planning on shipping to minimise the traffic congestion in the city.

“These are the actual DMUs we are getting. Cost for the 11 DMUs is Sh1.5 billion NOT Sh10 billion. They should serve us for another 20-25 years,” said Ms Koimett.

Whether true or not, the demand for commuter trains in the country is ballooning and that Nairobians religiously use the commuter trains to and from work is revealing. In March for instance, tens of thousands of commuters were heavily inconvenienced due to delays on the Nairobi commuter railway service (NCRS) schedule caused by the presence of French President Emmanuel Macron in the country.

“Dear customers, please note that the evening commuter train services will tomorrow (13/03/2019) experience delays. Syokimau 1 will depart at 1845 hours while Embakasi train will leave at 1900 hours. The other evening trains will run as scheduled,” read a notice by the Kenya Railway Corporation (KRC).

It was on the same day that the French President was conducting a station tour of the Nairobi Central Railway Station off Haile Selassie Avenue with commitment of funding the proposed development of a commuter rail service to the Jomo Kenyatta International Airport. This is aimed at decongesting the city as well as reducing the time taken between the central business district (CBD) and the airport.

The proposed JKIA commuter rail service, which is set to be completed by 2021 is part of a Sh340 billion public and private infrastructure trade deal between Kenya and France.

The Transport Ministry documents that over 13,000 Nairobians use the Nairobi Commuter Rail Service (NCRS), which was unveiled last December, every day. The NCRS is part of the Nairobi Metropolitan Transport Master Plan, which aims at decongesting the city.

The Kenya Revenue Authority (KRA) on the other hand keeps the data of revenues collected from ticket sales. It, however, does not report the number of travellers who use the NCRS in a day.

The data below shows the amount of money in millions that KRA collected from NCRS in terms of number of tickets sold in the period 2013 – 2016. 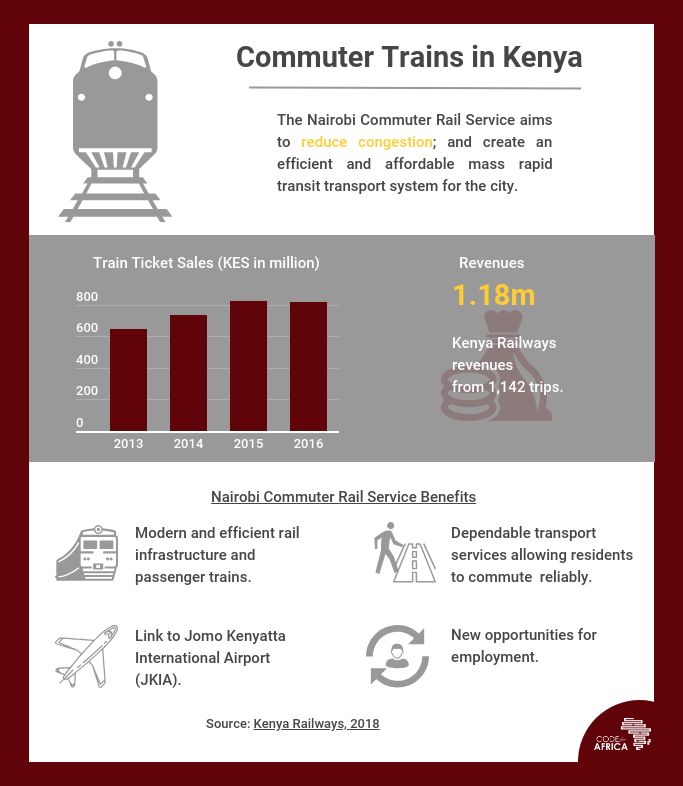 The NCRS operates 20 trips every day as shown in the below schedule, with average fare costs of between Sh30-Sh60. The Nairobi Transport executive Mohamed Dagane said in an interview last December that the commuter trains move over 40,000 different people daily contradicting reports by the Ministry of Transport.

“When the full complement is in they will enable us to transport around 132,000 people a day compared to the 13,000 we do today,” said Ms Koimett.

KRC in December said the NCRS project dubbed Nairobi Railway City (NRC) was part of its efforts to decongest the city roads. It is co-funded by the government and the World Bank.

To this effect, 10 new stations were to be completed to facilitate the plan. The Dandora, Mwiki, Githurai, Kahawa, and Ruiru were among the new stations. They complement the existing ones – Kibera, Imara Daima, Syokimau, and Makadara.

But the commuter train services in Nairobi are not a new thing. The services were introduced in the 1980s to provide a low-cost public transport alternative to the urban poor in the city, following the crippling economic inflation the country was experiencing at the time.

The long-distance passenger services had also been in operation between  Nairobi and Mombasa, as well as to  Kisumu, since the railway service went into operation in 1903 and as a result, the Kenya  Railways Corporation did not therefore have to acquire any new passenger wagons for the new services.

Despite the addition of the new wagons, the capacity is still limited as more and more Kenyans choose the trains over matatus, mainly because of time constraints and convenience away from the public service madness on the Kenyan roads.

Commuting to the city centre by train is much faster than by road, and more affordable. The trains carry sitting as well as standing passengers, with some hanging at the doors, and the more daring riding on the roof especially for passengers plying the Kibera route.

Most of the new stations constructed in the 2000s contain parking facilities allowing personal vehicle owners access to the stations. 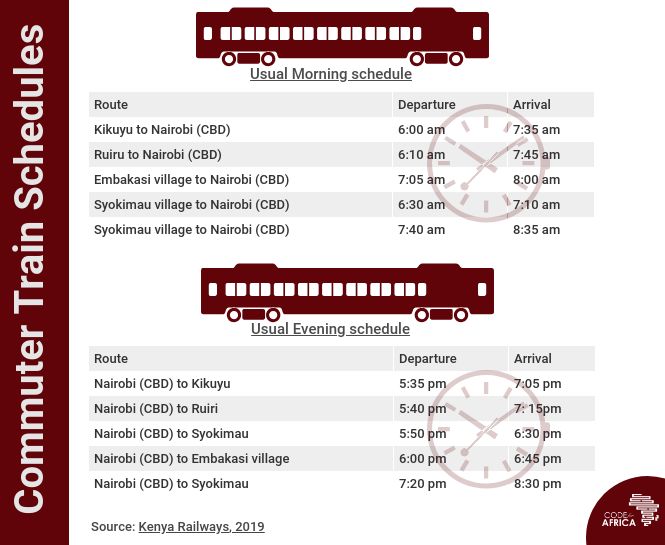 The commuter trains operate on weekdays twice during rush hours in the morning and evening. Some routes like the Nairobi – Syokimau also have afternoon services.

The service is not available on weekends, public holidays,  and during certain times of the day mostly non-peak periods.

The train picks up commuters at designated stops and takes approximately 20-30 minutes between stations. This includes a stoppage of two minutes at halts to pick up or drop commuters.

The current commuter rail network is so dilapidated that the average speed on some sections is as low as 15 kilometres per hour due to broken rails, unstable tracks and insufficient ballast.