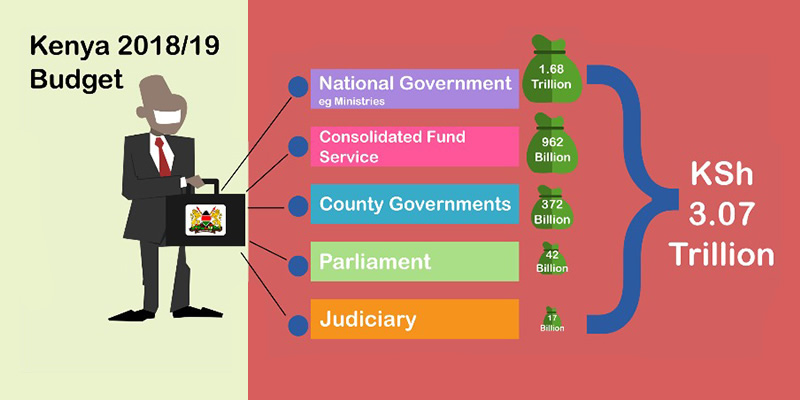 At Sh3 trillion (US$29 billion), Kenya’s budget for the 2018/2019 financial year is the highest spending plan in Kenya’s financial history, an increase of 10% from the previous financial year.  According to Treasury, just over half or Sh1.74 trillion (US$19 billion) will be raised through taxes and government fees while another Sh558 billion will be raised from domestic and external borrowing, including concessional loans which, via a combination of lower interest rates and longer grace periods, are acquired from donor countries and institutions on terms substantially more generous than market loans. However, this will still leave a Sh772 billion hole in the government’s books.

The budget has been widely observed as a balancing act between implementing the strategic big four agenda -boosting manufacturing activities, enhancing food and nutrition security, achieving universal health coverage and supporting the construction of at least 500,000 affordable houses by 2022 – and financing other government commitments.

However, the budget hits ordinary consumers the hardest through increases in taxes on essential goods and services, including flour and bread, fuel and electricity. Further, a 0.5% tax on employee’s gross monthly salary to go to the National Housing Development Fund alongside a matching contribution by employers, has been introduced. The well-heeled will also pay more for high powered luxury vehicles, duty on which has been increased from 20% to 30%.

The budget comes against a backdrop of massive corruption scandals that have stalked the Jubilee administration since it came into power in 2013.

Written by Joe Kobuthi, compiled by Juliet Atellah and designed by Bwana Mdogo.