Creolizing Rosa Luxemburg – Beyond, and Against, the Conventional 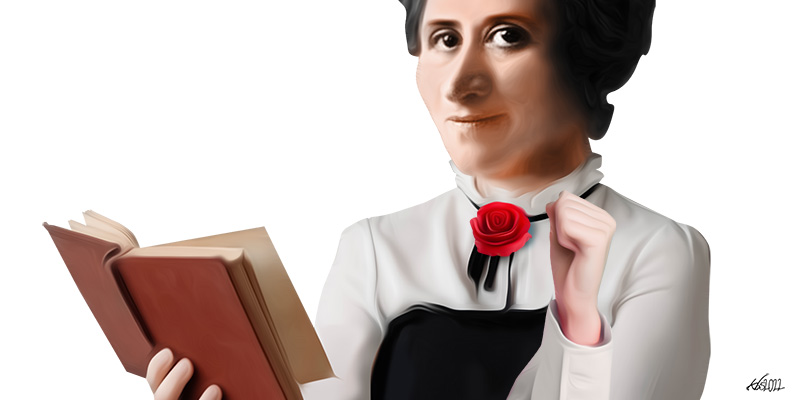 Arundhati Roy once memorably wrote that mass protests, which have been nourished by the memory of generations of repression return with “a kind of rage that, once it finds utterance, cannot easily be tamed, rebottled and sent back to where it came from” (2009, p. 169).  Her words ring true for the decolonial uprisings of a new generation. Inspired by South Africa’s Fallist movements of 2015-16 and in the wake of the global Black Lives Matter surge of 2020, (mostly) young and black protesters have turned against the “thingification” – to which Aimé Césaire equated colonization. This generation of anticolonial activists, from Cape Town to Windhoek, London and Berlin, speaks a new language of decoloniality, with which they claim radical humanity in struggle and theory. They have turned to theorists of the radical black intellectual tradition, such as Frantz Fanon and Aimé Césaire, and more recently Amilcar Cabral and Walter Rodney. Not all their revolutionary heroes are Black and male, though.

Rosa Luxemburg as a person, thinker and revolutionary is particularly attractive to the postcolonial ‘things’, who stand up against their objectified status, and who have been stirred by radical anticolonial humanist desires. More than a century after her violent death in January 1919 Rosa speaks to young radicalising activists because of the ways in which she went beyond, and against, the conventional and predictable in her writing and activism as much as she followed new pathways in the intimacy of her personal life.

It is thus quite appropriate that a new edited volume has set out to Creolizing Rosa Luxemburg in decolonial perspective. Jane Anna Gordon and Drucilla Cornell have put together an introduction and nineteen chapters by authors from the Global South and North, who come from different intellectual disciplines and traditions but share the view that the coloniality of power permeates capitalist modernity as a worldwide mode of domination.

Gordon and Cornell’s volume aims to revisit Rosa’s perceptive writings through the lens of creolizing theory to demonstrate how timely the Jewish-Polish-German activist-theorist’s insights are right now. They draw their orientation from a concept of creolizing as processes, which join together groups of people in unpredictable, yet recognizable ways. Creolizing as an approach to social, cultural and political theory originated in the Caribbean, yet has since been appropriated in endeavours to understand the ties between those “who were supposed to be radically unequal and separated through Manichean social orderings” (p.1). Creolized elements of life embrace ideas, yet also attributes of everyday life such as, among others, food or music. Gordon and Cornell argue that creolizing takes two primary forms. They summarise these as ‘historical and reconstructive’ and ‘constructive’ respectively. The first aims “to identify relations of influence and indebtedness that have been hidden and obscured. In its constructive mode, creolizing stages conversations that could not have taken place historically but that would have been and still remain generative” (p.1).

The volume speaks to both approaches. In historical and reconstructive perspective, Rosa’s pioneering practice of internationalism, and her efforts to look in her analysis and practice to global circuits that were already evident in local ways, rested in her understanding of revolutionary solidarity. In her seminal work of political economy, she extended the perspective of continuing primitive accumulation in global perspective, and specifically to Africa and Asia. However, her revisionist theorising of primitive accumulation, mass political action and imperialism always insisted on attention to the specificity of suffering. Her cross-species solidarity with her ‘brothers’ is well known, as she referred to the abused and violated buffaloes that pulled a heavy cart into the yard of the prison where she was incarcerated because of her fierce anti-war stance. In a fascinating chapter of Creolizing Rosa Luxemburg, Maria Theresia Starzmann extends this (post)humanist view with a discussion of Rosa’s herbalism and plant collecting while imprisoned, which Starzmann pronounces “first and foremost an act of care toward the natural world [and] also a political tool and an archival practice” (p.170).

Rosa Luxemburg: a letter from her prison cell

Oh, Sonyichka [Sophie Liebknecht] …Recently … [a wagon] arrived with water buffaloes harnessed to it instead of horses. This was the first time I had seen these animals up close. They have a stronger, broader build than our cattle, with flat heads and horns that curve back flatly, the shape of the head being similar to that of our sheep, [and they’re] completely black, with large, soft, black eyes. They come from Romania, the spoils of war. … The soldiers who serve as drivers of these supply wagons tell the story that it was a lot of trouble to catch these wild animals and even more difficult to put them to work as draft animals, because they were accustomed to their freedom. They had to be beaten terribly before they grasped the concept that they had lost the war and that the motto now applying to them was “woe unto the vanquished” … There are said to be as many as a hundred of these animals in Breslau alone, and on top of that these creatures, who lived in the verdant fields of Romania, are given meagre and wretched feed. They are ruthlessly exploited, forced to haul every possible kind of wagonload, and they quickly perish in the process.

And so, a few days ago, a wagon like this arrived at the courtyard [where I take my walks]. The load was piled so high that the buffaloes couldn’t pull the wagon over the threshold at the entrance gate. The soldier accompanying the wagon, a brutal fellow, began flailing at the animals so fiercely with the blunt end of his whip handle that the attendant on duty indignantly took him to task, asking him: Had he no pity for the animals? “No one has pity for us humans,” he answered with an evil smile, and started in again, beating them harder than ever. …

The animals finally started to pull again and got over the hump, but one of them was bleeding … Sonyichka, the hide of a buffalo is proverbial for its toughness and thickness, but this tough skin had been broken. During the unloading, all the animals stood there, quite still, exhausted, and the one that was bleeding kept staring into the empty space in front of him with an expression on his black face and in his soft, black eyes like an abused child. It was precisely the expression of a child that has been punished and doesn’t know why or what for, doesn’t know how to get away from this torment and raw violence. …

I stood before it, and the beast looked at me; tears were running down my face—they were his tears. No one can flinch more painfully on behalf of a beloved brother than I flinched in my helplessness over this mute suffering. How far away, how irretrievably lost were the beautiful, free, tender-green fields of Romania! How differently the sun used to shine, and the wind blow there, how different was the lovely song of the birds that could be heard there, or the melodious call of the herdsman. And here—this strange, ugly city, the gloomy stall, the nauseating, stale hay, mixed with rotten straw, and the strange, frightening humans—the beating, the blood running from the fresh wound. …

Oh, my poor buffalo, my poor, beloved brother! We both stand here so powerless and mute, and are as one in our pain, impotence, and yearning.

Write soon. I embrace you, Sonyichka. Your R.

It is such moments of specificity and solidarity, which are at the heart of some of the book’s most fascinating chapters, where authors put Rosa in conversation with thinkers of the Black radical tradition, who she didn’t and couldn’t meet: from W.E.B Du Bois and Walter Rodney, through to Claudia Jones and Lorraine Hansbury.

So why should we be re-reading Rosa Luxemburg from a decolonial, creolized perspective? What does she offer internationalist, anticolonial readers, analysts and activists in the 21st century? In the remainder of this review, I will highlight points made in some of the volume’s particularly perceptive chapters.

Two chapters connect Rosa’s political ‘strategy’ writing on The Mass Strike with 21st century moments of spontaneous mass action, one (by Sami Zemni, Brecht De Smet and Koenraad Bogaert) on the Arab revolution on Tahrir Square in Cairo; the second one (by Josué Ricardo López) on the Central American migrant caravans from 2018 onwards.

The longest section of Gordon and Cornell’s 500 pages book is dedicated to Rosa’s revisionist analysis of Marx’s concept of primitive accumulation, starting with an insightful contribution by the late historian Jeff Guy on, what he calls, “a rousing and provocative treatment of South Africa [with which] Rosa Luxemburg applied aspects of her theoretical arguments on the necessary structural links between capitalist and non-capitalist systems to the contemporary imperialist world” (p. 269).

Apart from a few exceptions, such as Patrick Bond’s and Ahmed Veriava’s chapters on the resonances of Rosa’s critique of political economy for contemporary South Africa, the volume tends to lean towards close considerations of her radical humanism. Many chapters speak to the enduring significance of Rosa’s thinking for contemporary concerns, including anticolonial nationalism, a decolonial and anti-racist approach to a critique of political economy, and in the final, particularly strong section of the book, articles on reading decolonial-socialist feminism with Rosa. These are the discussions at the heart of some particularly insightful chapters.

Jane Anna Gordon reconsiders Rosa’s thinking of the role of slavery and shows how she went beyond the conventional Marxist parameters in consistently including the connections between imperialism and capitalism. Gordon concludes that “many contemporary theorists of racial capitalism are tied genealogically to Rosa Luxemburg and her indispensable insights and orientation” (p. 143).

Siddhant Isser, Rachel H. Brown and John McMahon take this thread further in their important discussion of ‘race’-making in their chapter on ‘Rosa Luxemburg and the Primitive Accumulation of Whiteness’. They turn to Rosa’s reworking of Marx’s concept of primitive accumulation to theorize the relationship between capital accumulation and constructions of ‘race’ and whiteness as a continuous component of capitalism, across its history. Their writing speaks directly to Silvia Federici’s socialist feminist approach to the primitive (ongoing) accumulation of capital as ‘an accumulation of differences and divisions within the working class, whereby hierarchies built upon gender, as well as ‘race’ and age, became constitutive of class rule’ (2004, p. 63).

The development of the concept of primitive accumulation as an accrual of racialised and gendered social relationships is crucial for pushing radical theorizing that generates incisive accounts for feminist anti-imperialist and anti-capitalist practice. The book’s concluding chapters by Paget Henry and LaRose T. Parris on reading – and creolizing – Rosa Luxemburg through the Black Radical Tradition, illustrate this in fascinating close conversation of Rosa and her – imagined – encounters with thinkers and activists Claudia Jones and Lorraine Hansberry.

Rosa Luxemburg dedicated her life to intellectual reflection and political mobilisation because she could not tolerate injustice of any kind. She expressed and lived solidarity with all who suffered under exploitation and oppression – humans, and members of other species. Her yearning for a more human world undoubtedly resonates with today’s thinkers and activists in the movements for radical humanism in the Global South and North. Jane Anna Gordon and Drucilla Cornell must be thanked for bringing together a captivating collection of articles that look at Rosa’s beguiling legacy for our times.

This article was first published by ROAPE.