How to Circumcise Boys From One Metre Away 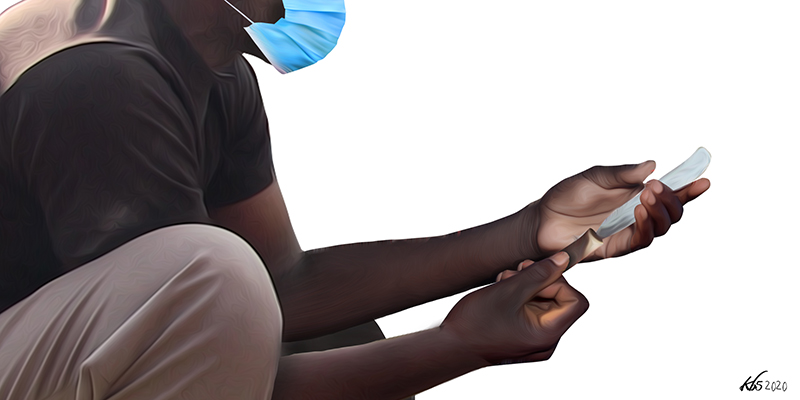 Just as the 9 o’clock curfew kicks in around the country, the crickets fall silent at the approach of stomping footsteps: it is the new witching hour at Sitikho Police Post in Bungoma.

Steel bells clink in rhythm to the monosyllabic sound of the whistle—blown repeatedly in accompaniment to the throaty chants of young women singing and men humming the new corona song:

“Keep one metre away”, the chorus roars back.

The band of up to 50 youths crowd together with clubs raised above their heads, peering into each other’s faces in the dark as they shuffle in, circling the police station up to three times before going back to the ceremonial homestead to regale waiting crowds with the new crop of ribald songs that are composed each circumcision year.

The police dare not come out. At the start of this year’s Bukusu circumcision season, which can only occur between August and December every even year, three assistant chiefs, two chiefs and a posse of administration police officers were repelled with sticks and stones from Mechimeru sub-location in Bungoma when they attempted to enforce the nationwide curfew and social distancing measures adopted to slow down the spread of COVID-19.

Messages about social distancing to slow down the spread of COVID-19 have reached every corner of the country, but they are far from lived experience.

Across the country, police have killed at least 15 people since the imposition of COVID-19 restrictions for failing to comply with regulations such as wearing face masks in public and being outdoors after curfew.

Circling the police station at the start of curfew is not only an act of defiance but also a dare to the base commander to step out of his house at the risk of certain forced genital cutting. The base commander at Sitikho Police Post is believed to come from a community widely known not to circumcise males.

Although measures to restrict movement have remained in place since March 27, the advent of the circumcision season has presented an impossible choice between tradition and civil obedience.

Tradition won, and the new crisis in the community is negotiating the impossibility of circumcising a boy from one metre away.

Bukusu circumcision—which mythology claims began with the first woman, Sela, operating on her husband, Mwambu, the first man—is more than the physical cutting of the foreskin. It is a public event invested with ritual and lore that form the core of individual and community identity.

Ancestors are spoken to in cajoling tones from early evening into the night, and animals are sacrificed before the operation at dawn. It is not a dry-eyed daylight affair, but it cannot also be privatised to a hospital surgery without attracting intolerable ridicule. The nightlong ringing of bells, the singing and ribaldry prepare the candidate psychologically for surgery at dawn, performed in the anaesthetising August cold after a visit to the river where the body is caked in mud before an icy walk in the nude to numb the pain and slow the flow of blood when cutting occurs back in the homestead.

Every two years, when the tassels of millet and maize begin to dry and the ears are full in readiness for harvest, boys from 12 years and older begin to smith bells from steel and tie stick holders onto them as well as the sisal strands that will create the visual spectacle in preparation for one of the most important rites of passage.

The bells are the calling card to the ceremony—the boy taking the initiative to travel to distant relatives to inform them that he is ready to face the knife. On the eve of the ritual, he visits his maternal uncle to acknowledge his joint heritage and is often feted with a bull—slaughtered and the rumen hang around his neck.

On the afternoon of August 3, the evocatively poignant sioyaye, a guttural melody that strikes a mixture of trepidation and anxiety in the souls of boys turning into men, rises to meet the road at Bukunjangabo on the outskirts of Webuye Town, as a group of youth and boys sing and chant as they escort a circumcision candidate back home. He is returning from his maternal uncle with the gift of a bullock.

Behind Lukhokho School, in Matete location of Kakamega County, another band of youths are dancing and singing as they walk another circumcision candidate back to his home with his heifer.

The air is replete with social licence. Men who have inherited the spirit of the circumciser get their knives down from the centre pole of their huts and begin to hone them. Once, when I was about 10 years old and learning the esoteric magic of past, present and future tenses, our English teacher heard the stirrings of the sioyaye, the soulful, haunting melody that brings the circumcision candidate home from his uncle—or early in the morning from the river.

He bounded over the low wall where space had been left for a future window, and cut across the football field faster than any of his stripling pupils could follow. He reached the candidate’s homestead a kilometer away where the hired circumciser calmed him by letting him hold the knife in his quivering hands.

Once the circumciser’s spirit is upon someone, he is not responsible for what will happen next. And the same licence often applies to others who may not themselves be circumcisers.

Local legend in Lugari rehashes the story of a senior manager at the large National Cereals and Produce Board depot who disregarded the counsel to take leave in August and was seized one Saturday as he attempted to rush the day’s collection from the store sales to the bank. A motley crowd collected around him, divested him of his clothing and took him to the river through the market to demonstrate that, indeed, he was in need of surgery. A circumciser alerted by the singing of the sioyaye ran to the scene and performed the surgery in seconds.

Although the matter ended up in court, no conviction was entered, and this has emboldened this form of cultural bullying that sees many teachers and public servants who may not fit in with the culture take leave during the season of temporary madness.

Night after night, village and sub-county administrators have to pretend to be in deep sleep as youths roam the land singing ribald songs as they keep the circumcision candidates awake before the dawn reckoning. It is a fight the government has no stomach for.

During the months when movement into and out of Nairobi, Mombasa, Kilifi and Mandera was limited by government edict, the Bukusu Council of Elders briefly considered whether or not to postpone this year’s circumcision activities, which would throw a spanner into the age set naming. After a little prevarication, it appeared that the rite would proceed because within the community, circumcising during an odd year can attract bad omens.

The only other time the idea of postponing circumcision was publicly broached was in 2008, in the aftermath of the 2007 election crisis in which over 1,000 people were killed. Some elders at the time felt that it would not be wise to launch a new generation of adults into the world with the stain of that year’s bloodshed, but they eventually overcame their fears.

The cultural pressure to conduct traditional circumcision among the Luyia communities living in Bungoma, Busia, Kakamega, Trans Nzoia and Vihiga counties generally, and the Bukusu in particular, had been obviated by a growing influence of churches which discourage heavy emphasis on traditional rites and sacrifices because they compete with Christian teaching. The church, however, is no ally of the government in the COVID-19 war. The restriction on congregations in places of worship has embittered church leaders and congregants in the region.

Public sympathy for health regulations to contain the spread of the coronavirus has also been severely eroded by restrictive orders around burial, another significant rite for the communities in western Kenya.

Funerals, which would previously be arranged for days and are important sites for performing public politics, are typically concluded in a day, with burials as early as 8 a.m. if the family is poor and cannot stand up to the bullying of the provincial administration and county officials. It is a source of great bitterness, resulting in families secretly exhuming the hurriedly buried dead in order to give them a befitting send-off.

At Kuywa market in Bungoma, a pastor of the Holiness Pentecostal Church was preaching to the bereaved, limited to just 15 as the government had ordered, when the Holy Spirit reportedly descended and threw official social distancing plans into disarray.

Schools remain closed across the country, with the youth roaming villages and hamlets. In public transport across the western Kenya region, the wearing of facemasks is mandatory but at markets, traders and buyers carry on without any of the new encumbrances.

Although the number of COVID-19 cases has reached 30,120 nationally, the five counties where the communities are in the grip of the circumcision dilemma have a combined total infection count of just 837 cases. Busia, the inland gateway to Uganda, has recorded the highest count of COVID-19 cases at 770, but this is believed to be on account of truckers crossing the border into Uganda. The neighbouring counties of Bungoma and Kakamega, Trans Nzoia and Vihiga have recorded under 20 cases each.

For as long as the spirit of circumcision hangs in the air in the five counties, curfew remains impossible to observe and enforce.