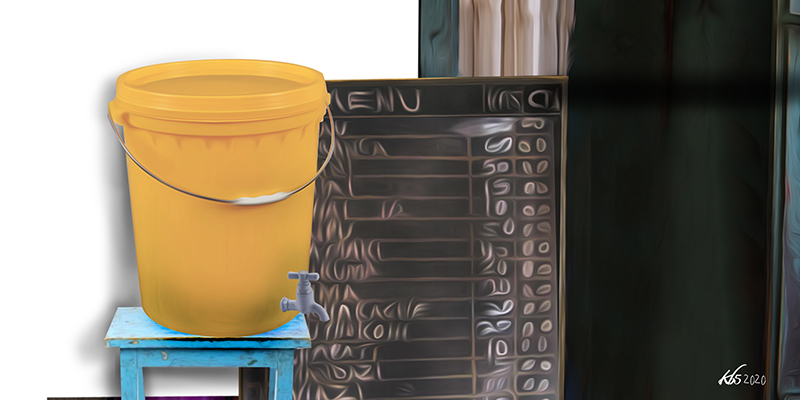 It is 1 p.m. on a hot, sunny, Friday. Across from the Sigona Golf Club on the Nairobi-Nakuru dual highway that is being reconstructed by the Chinese construction company China Wu Yi, Phyllis Ikoa’s food kiosk is teeming with men in helmets and overalls munching their hot, fresh lunch with their rough seasoned hands. At Ikoa’s food den, it is break time for her customers, who have just ended a gruelling morning shift.

Ikoa’s food kiosk, popularly known in local parlance as kibanda (shed), is nothing to talk about: it is small and many of Ikoa’s customers lack sitting space, which comprises form benches and makeshift tables. The kiosk is occasionally smoky because she often uses firewood as fuel for cooking.

Yet, despite the apparent “discomfort”, nothing beats Ikoa’s steamy, well-cooked food served at the most affordable of prices. Nothing compares with the camaraderie that her food brings among the easy-going, jocular, casual labourers who congregate at Ikoa’s eating den to gossip about their supervisors and site managers.

“I practically know all my customers by their first names,” said Ikoa. “It is important for me to know them because they keep my business going. Without them, I wouldn’t be in Kikuyuland.”

Ikoa is a Mteso from Adungosi village in Malaba town, Busia County, which is more than 400 kilometres from the Sigona area, which is 17 kilometres from the Nairobi city centre. From Tesoland, Ikoa brought her culinary skills that have diversified, as well as rivalled, the local cuisine. The local cuisine is mostly unsophisticated and usually consists of githeri – a stewed broth of maize and beans, occasionally spruced up with potatoes and chopped carrots. 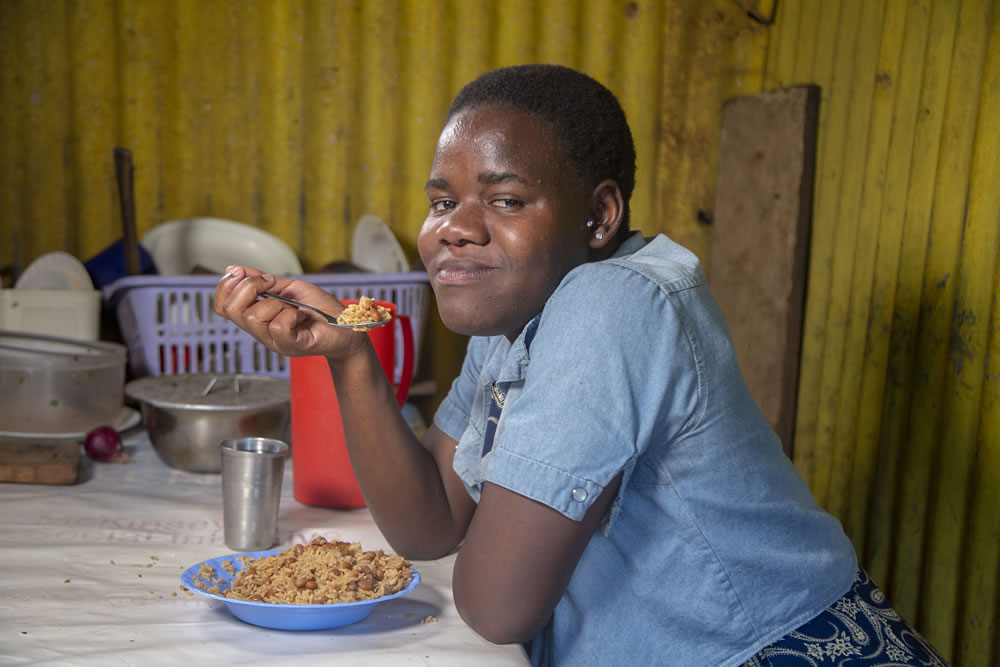 Ikoa’s food menu is diverse: Chapati and madondo (beans), rice and ndengu (green grams), ugali and tilapia from Lake Victoria, stewed matoke (bananas) from Uganda, and stewed or boiled meat that can be accompanied with either chapatti, ugali or rice.

Ikoa told me her customers prefer to eat her specially cooked meat, Teso style, with ugali. But it is her chapatis that have made Ikoa a popular name in Sigona, a location within the larger Kikuyu constituency in Kiambu County. Because of the popularity of her chapatis, some customers demand the inclusion of tea in her menu, so that they can enjoy the option of chapati and tea as a snack.

Ikoa’s food menu is diverse: Chapati and madondo (beans), rice and ndengu (green grams), ugali and tilapia from Lake Victoria, stewed matoke (bananas) from Uganda, and stewed or boiled meat that can be accompanied with either chapatti, ugali or rice.

Phyllis Ikoa’s chapatti-making skills have turned her into a household name in and around the Sigona area. “They’re people who come from Kikuyu town to eat my chapatti,” said a proud Ikoa. Kikuyu is just about three kilometres southwest of Sigona. There are others who come all the way from Kiambaa. Kiambaa is a bit further; it five kilometres up north of Sigona. “They all say my chapatis are really big and tasty.” I asked her why her chapatis have become famous and popular: “What now can I tell you? I prepare them well, they’re soft and they are big enough for one to enjoy them with either tea or with an accompaniment of your choice.”

I found a female customer who works at the Sigona Club house at Ikoa’s eating joint. Looking sophisticated with her permed hair, she heaped praise on Ikoa’s chapatis. Despite looking out of place, the lady said she was not restrained by those concerns. “Because of the lady, I’ve been getting orders to make her chapatis for ‘important’ people,” said Ikoa. By important people, Ikoa meant people who ordinarily would never be seen ordering chapatis at her kibanda, or even letting people know where the chapatis were cooked. She also makes, on order, chapatis for families who may not have the time to make them, or because they think she makes them tastier, and for unmarried men and women living alone.

“Phyllis’ food is the best around here: it is well-prepared, it’s nutritious, it’s fresh, it has variety, but above all, it’s affordable,” said mzee Santana, one of her loyal customers.

Santana is a caddie at the Sigona Golf Club. Now in his mid-70s, he carries a wide range of experiences. He has seen it all. He has been a caddie for 46 years since 1974, when he first came to look for work in Sigona from his home town of Limuru. Without food sheds like the one run by Ikoa, Santana told me, many caddies would be going hungry.

“Where would we be eating and there isn’t a food kiosk inside the club? In any case, the club would never ever dream of having such a structure inside the club’s precincts,” he said.

With a club house that can be seen from the road, the golf club only caters for the golfers, who happen to be some of the wealthiest Kenyans and privileged foreigners working in the country. At lunchtime, as the golfers took their break and troop to the club house, the poor caddies’ had to worry what and where they would fill their stomachs with.

“Phyllis just came the other day,” explained Santana. (The other day for mzee Santana is about 10 years ago.) Before the arrival of Ikoa, there wasn’t any kibanda anywhere; the caddies would just laze in the sun during the lunch hour while the golfers enjoyed the sumptuous meals. 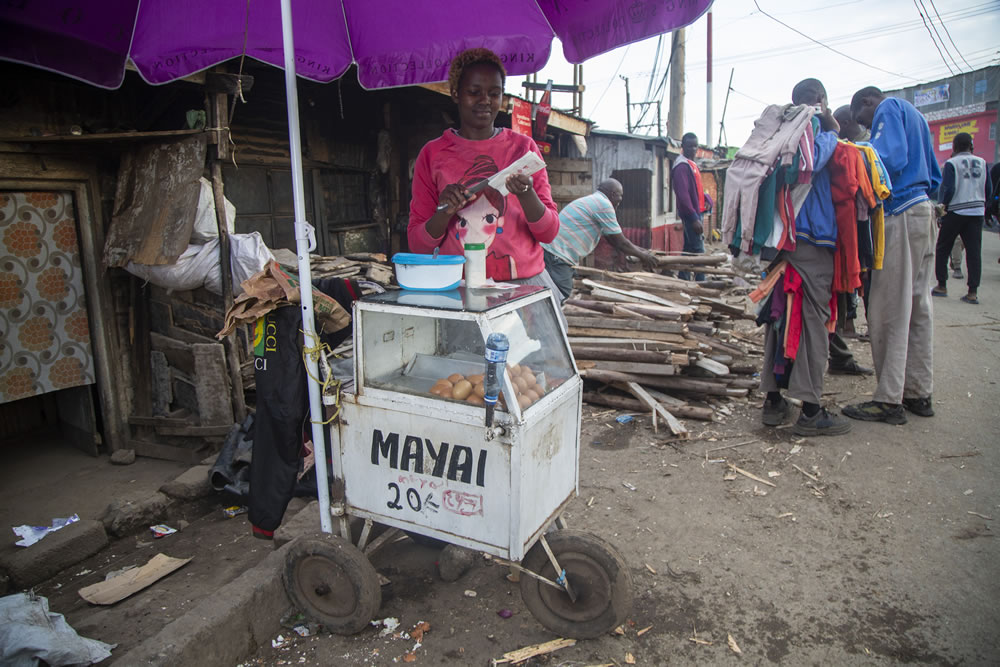 Before the real estate construction boom around Sigona area started about a dozen years ago, caddies comprised nearly all of Ikoa’s customers. “Over time I developed a rapport with them and even when they did not have ready cash, I’d still give them food and they would pay me afterwards once they had the cash, said Ikoa.

Ikoa has an exercise book in which she records her debtors’ names. Today, most of the people who are in that book are casual labourers who are paid weekly, on Fridays. Because of Ikoa’s credit facilities, they can eat and pay later.

“When I began my business here, I realised two things”, said Ikoa. “My customers were the lowly-paid rough and tumble workers who operated on a shoe-string budget, hence they required pocket-friendly priced foodstuff, if they were going to afford to eat it. It’s true, people can’t do without food, but only if they can afford it.”

The food seller said that to keep her customer base happy and always coming back to her, she knew she wasn’t going to compromise on the quality of the food and the pricing wasn’t going to fluctuate too much. “If you want to keep your customers intact in this industry of ours, quality of food is of utmost importance.”

Ikoa has an exercise book in which she records her debtors’ names. Today, most of the people who are in that book are casual labourers who are paid weekly, on Fridays. Because of Ikoa’s credit facilities, they can eat and pay later.

For Sh50 Ikoa’s serves you with a hot plate of rice and madondo and a spattering of vegetables (either cabbage or sukuma wiki), or rice with ndengu, or stewed matoke. For Sh70, you get, depending on your preference, a big brown or white round chapati served with madondo or ndengu.

“Phyllis’s food is filling especially for us guys who do tough manual work, because she serves it in good portions. Here, you know, you’ll be served with fresh food because the food is cooked on a daily basis. You can never hear of anybody complaining of stomach upset, for example, so we’re good,” said Kimani.

Ikoa’s sumptuous delicacy of ugali and tilapia with staked soup, at Sh100, is a favourite among her customers. “She introduced a delicacy that was not very much known in this area. Now people eat fish here with the expertise of the lake region people,” observed Kimani.

Friday is a particularly busy day for Ikoa. It is when the casual labourers are paid their weekly wages. On Fridays, Ikoa knows that she has to prepare lots of chapatis and bean and ndengu stew because of a special clientele that passes by at around 2 p.m. Some Muslim youth who work at the Shell petrol station on the opposite side of her kibanda, have formed a good habit of passing by her kibanda on their way back from the mosque, which is 600 metres up from her food kiosk. They order lots of chapatis, which they eat with bean stew served in a large bowl for the four lads to share, and eat with their bare hands. After eating chapati with madondo, the lads drown the food with copious cups of black tea. 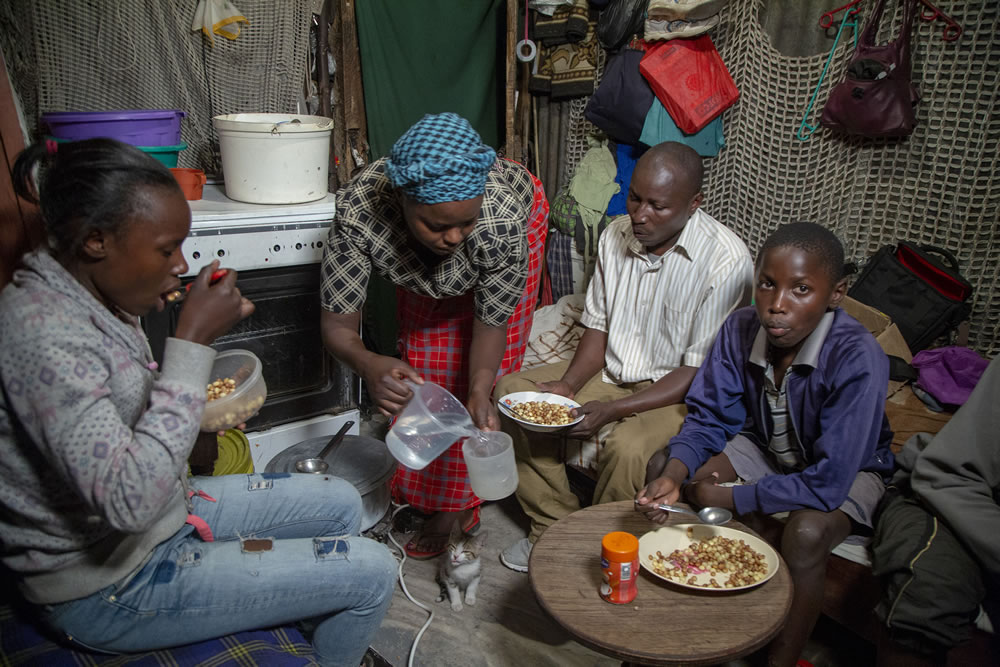 Ikoa told me that with the onset of coronavirus, her kibanda business has been badly affected. “Many of my customers have been laid off and I had really to scale down on the food I was used to preparing. Some of my customers would come to me and beg to be given food, with the promise of paying me later, but from what work? It was difficult”.

Mzee Santana told me once coronavirus was declared in Kenya, “the first thing our bosses did was to lock themselves in their houses and keep away from the club. When they gathered the confidence to trickle back to the club, they said they didn’t want to see us near the club and near them. Can you imagine?”

So, outside the club’s main gate, one can see many men waiting outside in groups of three and four. Santana said the club’s management had decreed that all caddies, henceforth, would only be let in the club’s premises with the express permission of their respective golfing bosses. “This means that work becomes intermittent and therefore unpredictable. But one cannot stay at home waiting to get a call from his boss for work.”

Likewise, Ikoa cannot afford to stay at home doing nothing. “After a couple of weeks into the lockdown, I was getting calls from my customers, asking me to venture out and make some food for them. Some of them just wanted a place to hang out, away from their restrictive homes, which they were not used to staying at all day long.” 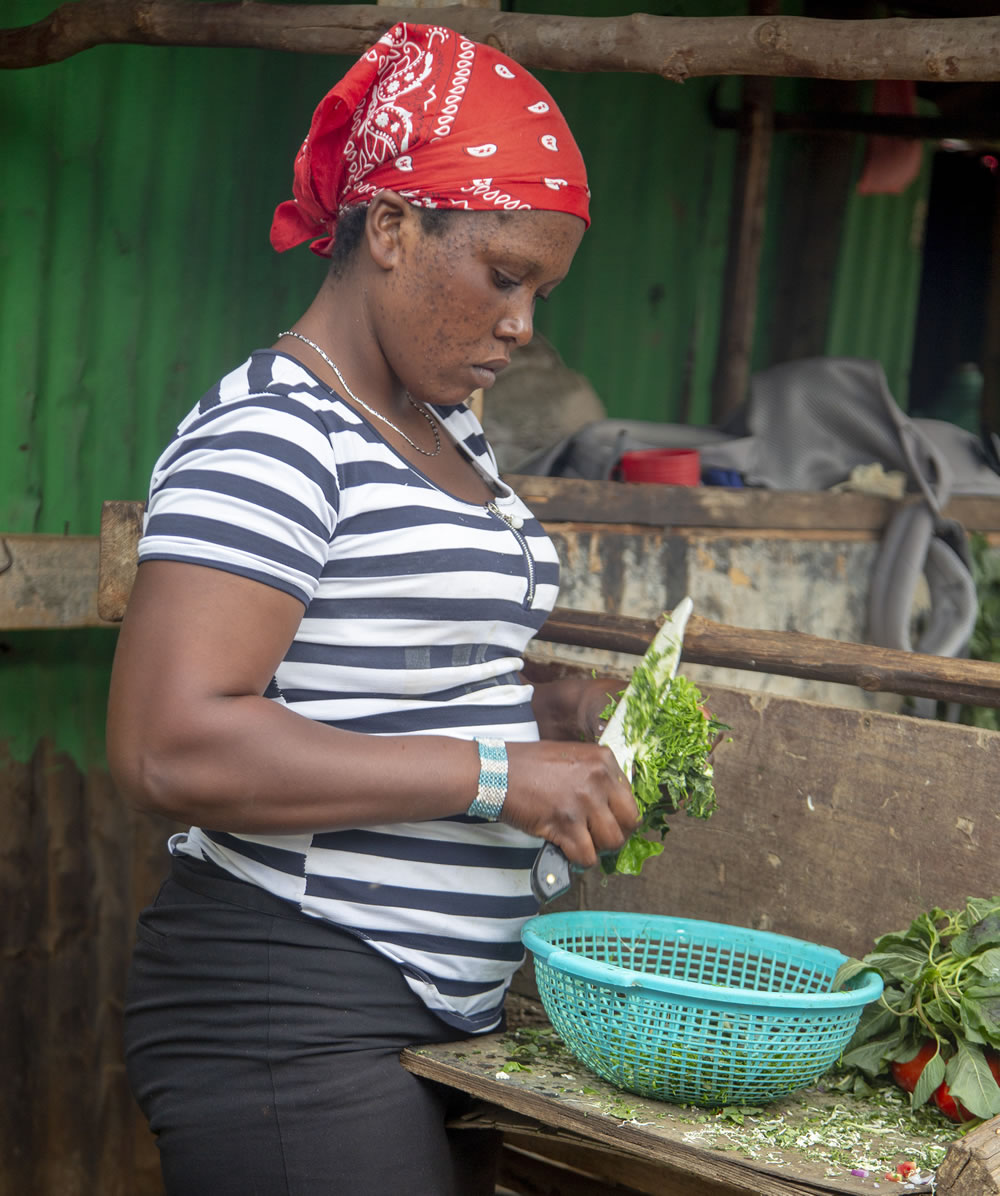 Hence, during this coronavirus crisis, Ikoa’s kibanda has become a meeting place for her customers, who discuss their trials and tribulations, and pool their little cash and buy food from her, while persuading her to provide them with food and keep a record in her exercise book.

Not an entirely new phenomenon, vibandas have always been around since the early 1970s, when they served only tea (in heat-resistant glasses) and mandazi, mainly in estates in Eastlands, which lies in the south-eastern part of Nairobi. Today, they are found practically along every road and street in the city, especially in working class and informal settlements. They, in essence, have become an integral part of the city’s culinary food parlours, serving exotic indigenous dishes and foods that were once ordinarily made in homes.

Street food embodies the essence of Nairobi’s culture, and during the COVID-19 crisis, it is street food vendors that have sustained people who do not have the luxury to have a home-cooked meal or to order food from restaurants. It is the likes of Ikoa, who with their expertise in preparing food that is nutritious and affordable, that have revolutionised the culture of street food in the city.