A National Reckoning: The Unfinished Business of Tom Mboya 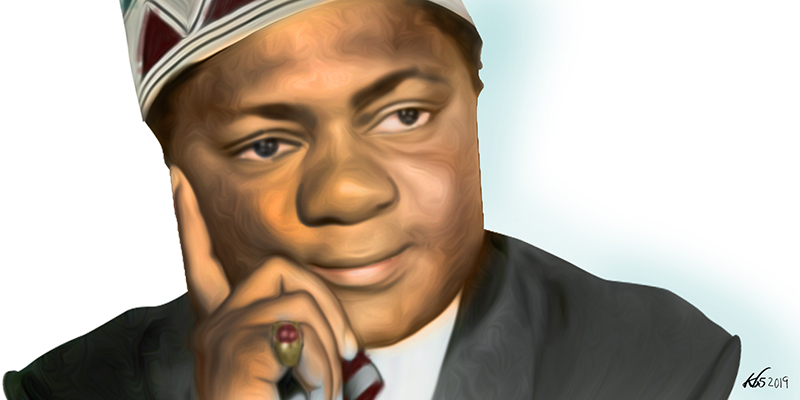 Reading Tom Mboya’s memoir “Freedom and After” (1963) is both depressing and irritating. Mboya was one of Kenya’s nationalists, who through his active role in the trade unions in the 1950s, called for an end to British colonial rule. The depressing nature of his memoir is not just about the lofty ideals he so eloquently talked about that never grew wings in post-independent Kenya, but because he became a principal architect in discarding some of those very same ideals. Maybe some of the ideals have been realized in other forms. One could mention a vibrant and freer media (despite accusations of being too cosy to the state) and a robust democracy where citizens now enjoy various rights and liberties. Unfortunately, citizens are still attracted to the idea of ethnic consciousness that often reaches a crescendo, especially during general elections.

One sunny Saturday afternoon on July 5, 1969, Mboya walked out of a pharmacy on Government Road, now Moi Avenue, probably with the lotion he had gone to buy stuffed in his coat pockets, only to be stopped by two bullets fired at close range sending him slumping on the pavement. By chance, a health ministry official – Dr Mohamed Rafique Chaudhri – happened to be passing by and heard the commotion, and, recognizing Mboya’s car, rushed to the scene.

Images that would later horrify the nation are those of a wounded government minister being wheeled to a waiting ambulance, his left hand slightly hanging on the side, his white shirt spattered with blood and eyes dimmed as Dr Chaudhri raced against time. Outside the Nairobi Hospital casualty department, African police officers in shorts and wielding batons pushed a surging crowd heaving in grief, tears flowing freely. Then a man appeared with a large framed portrait of Mboya clad in a suit and skull cap. Time had stopped.

Nyipir in Yvonne Owuor’s novel “Dust” (2013) reminds his daughter, Ajany, that 1969 was a very hard year. Mboya’s assassination from now onwards is transformed into permanent mourning – something like melancholia among his Luo people. It poisons political relations and some even observe, the economic fortunes of his kinsfolk. His death becomes an allegory of national trauma that had started with the ominous signs of authoritarianism, the shift from multiparty to a one-party state, the micro-management of national affairs by a small tribal gang and the cold-blood elimination of political opponents.

The trauma represses what remains of the desires and aspirations of the nation and a new mode of expression is birthed: silence. The 1970s is a decade which nearly everyone burrows their heads below the resounding din of Kenyatta succession politics above. Not that the people condone the climate of fear. There are a number of brave Kenyans who speak out. Ngugi wa Thiong’o, through his theatrical productions, begins to ask difficult questions concerning the state of the decaying nationhood and the dwindling hopes of achieving some of the post-independence dreams. Others such as Meja Mwangi, like a sly hare, manoeuvres his way and slips through the political dragnet that ensnares Ngugi.

Mwangi’s novels: “Kill Me Quick” (1974), “Going Down River Road” (1977), and “The Cockroach Dance” although on the surface pulpy crime fiction, all point to much deeper critiques: the escalating socio-political and economic decay, the marginalization of the poor to the ‘back streets’ of society. The three fictional accounts through their witty titles become stark symbols of the growing disillusionment, cynicism, and dehumanisation seeping into the national psyche. The after-effects of freedom that Mboya had hoped would propel Kenya to the heights of respected nations have turned into a nightmare of chronic unemployment, stiff bureaucracy, cronyism, tribalism, and nepotism. Maina and Meja, the main characters in “Kill Me Quick” cannot secure jobs because nobody knows them. Attempts at freeing themselves from their precarious condition are vigorously thwarted by don’t-care civil servants, and ordinary people survive through trickery and sheer wit. Noticeboards proclaim everywhere: Hakuna kazi!

Mboya’s memoir is a journey of survival and triumph against the colonial enterprise that forced Africans into beasts of burden, a model that the post-independent leaders inherited, and fashioned creatively in the subsequent decades to benefit them. His father is promoted to an overseer (nyapara) after working for fifteen years as a labourer for a white man in a sisal plantation. It is from that crucible of colonial repression mixed with a determined spirit that he decides to “go to a school where I might learn to read and write.” There is palpable excitement in the way he recounts those formative years. For Mboya’s generation, education is not just a ticket to becoming literate, but a means of emancipating oneself and breaking the chains of oppression and bondage.

Early exposure to education in Central Kenya, a land far removed from his family’s ancestral origins in Rusinga Island, affords Mboya the advantage of a multi-ethnic outlook in life. He becomes a polyglot with the ability to speak Kamba and Gikuyu fluently besides Dholuo, English, and Kiswahili. In the conventional sense, from a tender age, he becomes a ‘Kenyan’; that elusive and controversial term that elicits fierce debate. On the one hand, opponents of the idea of ‘Kenyanness’ ask: Why should they identify as Kenyans? Who defines that identity and who benefits (politically and economically) in such an arrangement? Is it the entire nation or just a few communities closer to the centre of power? On the other hand, the proponents counter that ‘Kenyanness’ helps us to rise above ethnic chauvinism. Not that identification with ethnicity is wrong. In fact, Mboya calls it ‘positive tribalism’ – a form of tribalism critical to the formation of national consciousness and is also reflective of African sensibilities and history. He rightly argues that it can be attained through tapping into our respective ethnic cultures and customs, particularly the concept of communality that, despite the onslaught of modernity, and now globalisation, still remains firm among most Kenyan communities.

Throughout Owuor’s novel, Mboya’s death is an omnipresent event that constantly directs us to a traumatic period that has not been mourned. His ghost is that of a repressed collective identity submerged into the nation’s unconsciousness. The repression shields the country from confronting its problems of marginalization of minorities, ethnic domination by a few, and state capture by powerful economic interests who continue to build empires on the haggard backs of a majority poor. In death, Mboya magnifies the lost agency for a Kenyan identity as the primitive accumulation of wealth by the political class continues to wreak havoc. The ethos of ujamaa has virtually disappeared in a politics of the belly devoid of ideology and vision that Frantz Fanon so prophetically warned about in “The Wretched of the Earth” (1961). Fanon cautioned that unless post-independence leaders remained steadfast against the temptations of narcissism and mediocrity, nothing substantive in form of development and national unity would come out of such nations.

Later at Ruskin College, Oxford, Mboya experiences an awakening. He writes: “It was my first opportunity to taste something of the atmosphere of an academic institution, to meet intellectuals and to read books.” Knowledge is like food. He finds it delicious and immerses himself into intellectual activity, sharpening his thoughts and ideas. He fosters self-confidence and the ability to articulate his arguments with growing clarity and depth. He even flirts with the polemical when the occasion demands. He is only twenty-six years old and soon will start organising funding for the airlifts of Kenyan students to America with the financial assistance of the future American president John F. Kennedy. He rejects Richard Nixon’s offer from the US State Department to keep “the airlift a private programme, rather than turn it into one sponsored by government.”

In the next few years he addresses a Civil Rights rally in Washington, DC alongside Dr. Martin Luther King Jr. And in a future televised interview at the University of California, Berkeley, Malcolm X will shower him with glowing tributes in the same sentence with Kwame Nkrumah, Patrice Lumumba, Gamal Abdel Nasser, and Nnamdi Azikiwe. The stage of resistance like a pendulum will swing from local to international back to local as a number of African countries sprint to independence in the early 1960s, that blood-drenched decade of wanton murder and backstabbing of black visionaries.

Marjorie Oludhe Macgoye’s “Coming to Birth” (1987) encapsulates that season of bloodletting as characterized by whispers, whispers, whispers. One of her protagonists called Martin Were, slightly younger than Mboya, struggles to have a child with his wife Paulina. However, the desire for an offspring is consistently disrupted by miscarriages. Their life is a trail of one tragedy after another. Like Mboya’s nationalist and pan-Africanist vision that is now clouded in semi-darkness, Macgoye’s fiction could be said to symbolize a nation increasingly finding itself marooned, held captive, and strangulated of its life. Martin finally goes berserk when he learns that Mboya has been slain in broad daylight.

Music is a journey into the recovery of lost memories. Listening to music is to be transported into realms of darkness and light. Music is freedom. In the succeeding decades after Mboya’s assassination, his memory started to find its way into popular culture. Benga music which dates back to the 1950s began churning out dirges praising his famed charisma, his political acumen, his naivety, and his subsequent violent obliteration from national memory. Gabriel Omollo’s song “Tom Mboya” while mining the culturally rich Luo folklore and its animal characters, belted out evocative lamentations asking: “what wrong did we the wretched Luo do to deserve the murder of Mboya?”

Like other earlier benga songs that anchor their themes on hero-worship and death, D.O. Misiani’s “Robert Ouko I &II” also followed the same musical trajectory with his sentimental tone also crying: why us? Emma Jalamo’s song titled “Raila”, a masterful fusion of ohangla and rumba, another creative lament with an air of blues, on the other hand, mourns Mboya, not as a national figure, but a martyr of the Luo community. Death assigns Mboya a new identity. An exclusive ethnic identity so that from now onwards, he becomes ours, not yours. Luo music dedicated to him could equally be said to follow a metaphysical bent detached from the material world of political successions and deal-cutting and of modern-day tenderpreneurs with connections to the state. The music struggles with the darkness of forgetting while constantly rallying the community to remember. Benga music reinvents Mboya’s memory giving us the freedom to remember and celebrate him in numerous ways. Music not only surmounts the silence and the amnesia long associated with his mourning at the national level, but it also reminds us to ask for the umpteenth time:

Who is this big man who ordered the hit?

Mboya’s memoir concludes on a hopeful tone, with his emphatic belief that Kenya will ultimately show up for a dance at the world stage and demonstrate to others what Africans can achieve and accomplish. Underlying the optimism and enthusiasm, he does not reveal the simmering undercurrents of succession politics and his hand in manipulating it to his advantage, a machine that would later immolate him. He neither reflects at length on his political naivete, his unbridled ambition to elbow so many others out of the centre, the digging of the grave. But who has the temerity to admit such personal flaws at the age of thirty-three?